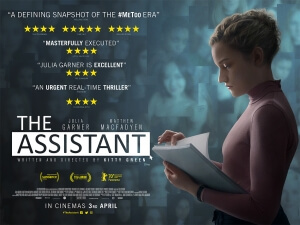 BASICALLY…: Jane (Garner), who works as an assistant to a powerful film executive, slowly uncovers the shady behaviours of her boss and co-workers…

Harvey Weinstein is never mentioned by name in The Assistant, but it’s very clear he was a main source of inspiration for this gripping, quietly intense workplace drama which gives us the closest we’ve come yet to seeing what working with the now-convicted sex offender must have been like, although to just keep comparing this movie to the real ex-movie mogul would be something of a disservice to the film as a whole.

On paper, it doesn’t seem like the movie would be anything special or even that dramatic – the whole thing follows a young woman named Jane (Julia Garner) through a simple day at her job working for a nameless, but undoubtedly powerful, film executive, during which she performs several menial tasks such as cleaning up, making photocopies, providing refreshments, and taking phone calls – but where writer-director Julia Garner plants the real drama is in the stuff we don’t see. You hear faint whiffs of heated conversations from behind the executive’s closed doors, you feel the emotion within certain voices on the other end of a phone call, and you pick up on several hints of misconduct through jokey banter between fellow male employees.

Even though we never, ever see anything sexual going on, it’s very apparent that’s what’s happening or on the verge of happening around every corner of this particular workplace. Jane seems vaguely aware of what her boss is very likely getting up to – whilst tidying his desk at the beginning of her day, she briefly investigates what is apparently a mysterious stain on the carpet – but she is in no way complicit towards his behaviour; in fact, during the film’s core centrepiece, she attempts to reach out to the HR department – here represented by Matthew Macfadyen, who manages to be completely unsettling in just twelve minutes of screen time – with concerns about a new assistant who’s young but clearly inexperienced, and who she learns has been visited at her hotel by her boss. However, she is met with a horrifying response that any potential female whistle-blower will very sadly recognise, and it provides a core theme for the movie that stretches itself beyond the Weinstein comparisons; this is very much a film about the shocking inequality in the general workplace, where women have virtually no power in companies run exclusively by male counterparts, even though they are led to believe that they in some way have an important part to play. It also highlights the causal nonchalance towards this problem, and the psychological tactics some people use to keep everything in check, such as gaslighting or victim blaming which causes far more problems for women than they supposedly solve.

What writer-director Kitty Green does so well is clearly convey what exactly is going on without ever bringing it into the foreground; through some clever use of sound design and claustrophobic cinematography, she manages to mask the atrocities with mundane office noises from the never-ending tapping of keyboards to the whirring photocopier spitting out headshots of potential actresses, which drown out the muffled voices on the phone as well as in-person meetings within earshot, but you know exactly what’s up even if you can’t make out a word that other people are saying. This is Green’s first narrative feature after working on documentaries like Netflix’s Casting JonBenet, and you can feel how natural and real her direction feels in the performances, the editing and the overall aesthetic, which makes what you’re not seeing all the more horrifying because it gives you an authentic image in your head about what’s happening underneath the surface. You can feel your heart pounding intensely as Jane is simply cleaning up a meeting room, not because of what you’re actually seeing but because of what you are imagining is probably going on in a few rooms over.

Garner, so good on Ozark and in films like Grandma, is quietly fierce in a role that isn’t very dialogue-heavy, but she conveys everything the character is feeling through some carefully chosen expressions which, like the film as a whole, opts for a “less is more” attitude. She harnesses so much power in a role where, ironically, she comes to find she has little to no power at all, and you can feel her burning anxieties and frustrations in the slightest inflictions in her voice and in some tight close-ups where she, ear on phone, takes verbal abuse from her unseen boss for the slightest of errors. It’s a completely intoxicating and subtle-as-hell turn, which might not seem like much on the surface, but as we’ve come to learn with this movie there is so much that is operating well beneath our noses.

Oddly, this movie makes for a fascinating double feature with Never Rarely Sometimes Always, which also dealt with serious female-centric topics in an extremely subtle but no less powerful manner, and also addresses the stunningly deep divide between male and female attitudes when it comes to appropriate interactions. Both are excellent movies, and both are among the best I’ve seen so far this year, with The Assistant in particular doing and saying far more than just simply “Harvey Weinstein’s practises were awful, and here’s why”, and instead provides sharp and timely commentary on a system that needs to, and must, change.

The Assistant is a smart and subtle commentary on workplace environments and their casual sexism as well as their inappropriate misconduct, with writer-director Kitty Green taking heavy inspiration from Harvey Weinstein’s crimes but also providing some unsettling parallels to how it is in nearly every other industry, all anchored by a quietly fierce lead performance by Julia Garner. It’s one of the more urgent, and strongest, films you’ll see all year.