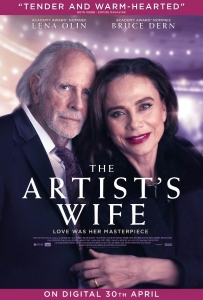 BASICALLY…: After her more famous artist husband (Dern) is diagnosed with dementia, Claire (Olin) is plunged into a late-life crisis…

If the highest standard of dementia portrayals in film is Anthony Hopkins in The Father, and by far the lowest is Nick Nolte in Head Full of Honey, then seeing Bruce Dern try and pull it off in The Artist’s Wife falls neatly somewhere in the middle. The 84-year-old actor, no stranger to playing characters with deteriorating minds in recent years (even earning an Oscar nomination for his turn in Nebraska), really does nail the anger and frustration that can come with such a disease, but so rarely do we actually get the opportunity to actually explore what might be going on in that head of his.

At no point is this ever the fault of the actor, who does some very good work here, but more so the fault of the slight and rather generic script he’s working from, co-written by director Tom Dolby who does appear to have some understanding of what he’s dealing with, but struggles to show it in a film that lacks a distinct voice of its own.

Dern plays Richard Smithson, a famous artist in his twilight years, while the titular wife is Claire (Lena Olin), who’s a couple of decades younger than him but is nonetheless dedicated to supporting her husband and his admired career, having even given up her own desires to become an artist in the process. However, Claire finds herself struggling to cope after Richard is diagnosed with Alzheimer’s, which causes him to begin acting out and displaying very different characteristics than she’s used to seeing in him. She soon becomes eager to reunite him with his estranged adult daughter Angela (Juliet Rylance) before his dementia becomes worse, but Claire also finds herself drawn back to creating her own art as a means to cope with the rapid loss of the man she once thought she knew.

While the film is much more from Claire’s point of view than Bruce Dern’s Richard, as the title perhaps spells out all too clearly, it does have a decent hold on the ever-shifting nature of dementia, and has some idea of what a partner’s diagnosis can emotionally take out of someone who must now live with someone that has it. The acting is good all around, with Lena Olin delivering a non-showy lead turn that compliments Dern’s equally solid portrayal of an increasingly angry and confused old man, and there are moments in the writing where you can tell that Dolby and co-writers Nicole Brending and Abdi Nazemian have drawn from possible real-life experiences to give as compelling a portrayal of Alzheimer’s as they can.

However, the overall script doesn’t manage to go any deeper than that, and instead keeps things at a surface-level portrayal while instead putting a bit too much energy and time into a more conventional, less compelling story of a middle-aged woman who tries to cling onto what she has left in the world. It isn’t that it’s done terribly, because the filmmaking is passable despite some choppy editing and direction that is occasionally unfocused, but it’s a plot that has been done many times before, and there isn’t much that’s different here to make it really stand out. There are many familiar plot beats including the reunion of estranged family members and the odd love affair which don’t land as effectively as it perhaps desires, because you don’t always feel as though it’s earned since it doesn’t appear to have much to say other than what so many other films about dementia have managed to say already. Even the main character isn’t always the easiest to sympathise with, because despite Olin’s solid performance Claire is someone who arguably goes through certain problems that only certain affluent people will relate to (she expresses frustration over her husband buying a $90,000 clock, despite living in a nice house that probably cost at least three times as much), and it’s hard to feel bad for somebody that, despite the rough situation with her husband, will no doubt be fine long after it’s all over and done with.

Outside of the decent lead performances, The Artist’s Wife sadly doesn’t seem likely to be remembered by many shortly after being viewed. It’s definitely got some decent qualities to it, but ultimately if you want a movie that really tackles the issue of dementia head on and in a much more unique and even intelligent way, then you’re far better off waiting until June when The Father finally makes it to cinemas. However, if for whatever reason you need your cinematic fix of old-age dementia before then, then it’s okay enough for a rental – and certainly the far better option than Head Full of Honey.

The Artist’s Wife has some decent understanding of the emotional turmoil that comes with dementia, which is exhilarated by solid lead turns by Lena Olin and Bruce Dern, but the script ultimately lacks its own distinct voice in a slight, conventional script that doesn’t have much else to say about the subject.

The Artist’s Wife will be available to rent or buy on digital platforms, including Amazon Prime Video, from Friday 30th April 2021.