The Art of Racing in the Rain (Review)

The Art of Racing in the Rain (Review) 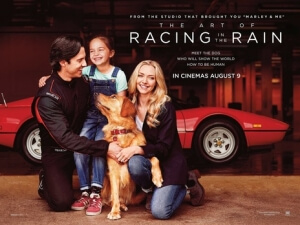 BASICALLY…: Enzo (Costner) is a dog who watches over the life of his owner, race car driver Denny (Ventimiglia)…

This year at the movies, we’ve had dogs finding their way home and going on journeys through multiple reincarnations, so I suppose the most logical next step was to have a dog step his paw into the race car circuit. Don’t worry, those who are suddenly having Air Bud flashbacks; the dog in The Art of Racing in the Rain doesn’t actually drive a car or anything ridiculous like that (it’s alarmingly telling about the state of dog-centric movies nowadays that I have to specify how that DOESN’T happen), but it does see the life of his race-car driver owner pass him by while Kevin Costner narrates his thoughts, in a movie that will most certainly appeal to all dog-lovers everywhere, and even win over a few sceptics with its wholesome and completely watchable manner.

Said Costner-voiced dog is Enzo, a golden retriever who as a puppy is adopted by a guy named Denny (Milo Ventimiglia), a race car driver. Enzo, introduced at the end of his life when he desires to be reincarnated as a human as per his Mongolian ancestors (a fact he picked up from watching a TV documentary), recalls his life with Denny, who ends up meeting and eventually marrying a woman named Eve (Amanda Seyfried), has a daughter named Zoe, experiences loss both professionally and personally, and wars with his in-laws over custody of Zoe. All of it is told from the dog’s perspective, as he attempts to analyse his place and meaning in the lives of his human family, while also gaining enough experience and knowledge of the world before his eventual passing, and hopeful transitioning into a human soul.

Although it shares the same level of sentimentality as them, the film differs greatly from some of the more recent dog movies like A Dog’s Way Home and A Dog’s Journey; aside from the fact that it wasn’t based on any book by W. Bruce Cameron (which those two films were), The Art of Racing in the Rain attempts to be a more mature version of this kind of story, where we see very human issues told from the perspective of the canine companion. Those other movies had the likes of Bryce Dallas Howard and Josh Gad voice the dog with a cutesy but pandering tone of voice, rendering them more for a certain younger demographic just from the way they read their lines, but with Kevin Costner’s aging vocals accompanying the dog’s thoughts here it automatically feels a tad more mindful of the older members of its audience, and it doesn’t talk down to them as much as the others. Because of that, the film feels more genuine and heartfelt, and in moments that are blatantly designed to draw tears from its viewers they work because the movie is ambitious enough and both the acting and the script – the latter by Mark Bomback, whose previous credits include both Dawn of and War for the Planet of the Apes – is decent enough to hold your hand through the arguably more saccharine scenes.

Although its eyes are set on appearing more mature than some of its distant relatives, the film does still have a level of silliness that ranges from melodramatic to borderline insanity. The custody battle sub-plot, which dominates the second half of the movie, is especially cheesy as the in-laws that Ventimiglia’s Denny is fighting against do some cartoonishly evil and petty things just so they can get their unsympathetic mitts all over his daughter, and it’s made even more ridiculous when it paves the way for the film’s most outlandish poop joke involving the dog at the centre of it all. There is also a mini-arc that sees Enzo the dog being mentally tormented by a zebra toy he perceives to be a demon, which in one hallucinogenic scene actually comes to life via horrifying CG effects that turns the whole thing into a cartoon for thirty seconds, so get ready for that when you go and see this. The movie does struggle with tone because of these things, as one moment it will be having you reach for the tissues, and then the next Costner will be describing how he once has a tapeworm inside his digestive system. For some, it will be a weird sit because of its tonal inconsistencies, but for anyone else it will probably feel just about right, especially if they’re into dogs themselves.

That’s really who this movie is made for, anyone who has ever had and loved a dog at some point in their life, and just wants to see their life play out on the big screen. It worked for Marley & Me, and to an extent it worked with the W. Bruce Cameron adaptations from A Dog’s Purpose to A Dog’s Way Home to A Dog’s Journey, so the appeal is undeniably there for a film like this to come around and move certain people to tears through its corny melodrama and warm-hearted emotion. In some ways, this is probably a better movie than most of those, because it does have a higher level of ambition and a more genuine sense of heart which makes the more tearjerker moments actually feel earned rather than just there to milk however many tears you may have in your system. I know for a fact that this is a movie my mother would adore; she loves dogs, and I can see her tearing up on several occasions while watching this film, which out of all the other recent dog movies I’ve mentioned is probably the one I’d be most eager to show her, because it’s not as pandering or as manufactured as something like A Dog’s Way Home, and seeing how her dogs are Labradors (not quite the same as a golden retriever, but close enough) she’d probably relate to it a little more.

It’s not quite the best of these type of movies, but it’s also extraordinarily far from being the ruff-est one to sit through. I make no apologies for that awful pun, and neither should you for enjoying this decent enough flick.

The Art of Racing in the Rain attempts to appear more mature and less pandering than other recent dog-centric movies like A Dog’s Way Home and A Dog’s Journey, and while it still occasionally falls into the trap of being overly ridiculous and melodramatic, it has enough of a genuine heart to it that it manages to be a more wholesome experience.