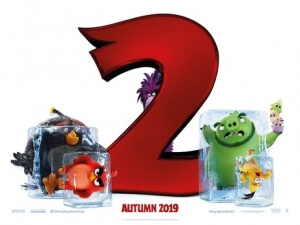 BASICALLY…: The warring Birds and Pigs must form an uneasy alliance to take on a new foe that threatens their very existence…

What a difference an entirely new creative team makes; the first Angry Birds Movie, directed by Clay Kaytis and Fergal Reilly and written by Simpsons veteran Jon Vitti, was a frustratingly cynical adaptation of the popular gaming app which was far more interested in selling its product more than having any kind of soul, with characters who were either annoying or unlikeable (sometimes both) and a plot that barely felt strung together by pandering toilet humour.

For the inevitable sequel – like it or not, that first film was a financial hit, making just over $350 million worldwide on a $73 million budget – there’s been a reshuffle of creative talent, and thank goodness. Replacing both Kaytis and Reilly as director is Thurop Van Orman, a first-time feature director after mostly working on television shows such as The Powerpuff Girls, Adventure Time and The Marvelous Misadventures of Flapjack, and taking Vitti’s place as writer are Peter Ackerman (best known for co-writing the first Ice Age film), Eyal Podell and Jonathon E. Stewart (both of whom worked on Cars 3 and Smallfoot), so you could say that this sequel, despite retaining the same characters, voice actors and most of everything else, is something of a soft reboot. Mercifully, it’s one that’s entirely called for, as The Angry Birds Movie 2 is a noticeable step-up from its lacking predecessor, even though there are still hints of the very things about the previous film that didn’t work.

When we start, it’s very much classic Angry Birds lore; the inhabitants of Bird Island, including local hero Red (Jason Sudeikis), are at war with the green pigs of Piggy Island, led by King Leonard (Bill Hader), with both sides using various means such as slingshots and giant magnifying glasses to cause each other grief. However, Leonard soon discovers that there is a third island somewhere in the distance that’s shooting giant ice balls at everyone, where lonely purple eagle Zeta (Leslie Jones) is sick of living on her frozen wasteland and seeks to claim both Bird and Piggie Islands for her new summer getaway. The pig leader suggests a truce with the birds so they can team up to take on this new enemy, but Red is reluctant to let his newfound popularity slip as a result of the truce. Nevertheless, they form an uneasy alliance and recruit a team of experts – including Red’s friends Chuck (Josh Gad) and Bomb (Danny McBride) as well as Chuck’s sister Silver (Rachel Bloom) and Mighty Eagle (Peter Dinklage), and Leonard’s fellow pigs Courtney (Awkwafina) and Garry (Sterling K. Brown) – to sneak onto Zeta’s island and stop her from destroying their homes.

Where this movie actually succeeds where the first one very much didn’t is that there’s much more of a personality to this film; the style of the jokes, from the slapstick to how some of the dialogue is delivered, feels very much like classic Looney Tunes, with a zany approach that makes as much use of its animated settings as possible. Easily the best example of this, and also the best part of the entire movie, is a sub-plot featuring three baby “Hatchlings” – their leader, Zoe, is voiced by Brooklynn Prince, the young stand-out from The Florida Project – who have to save Zoe’s unhatched baby sisters after they’re swept out to sea. This sub-plot feels like it could be its own cartoon short, and that’s meant in the best way; like your average Wile E. Coyote or Tom & Jerry cartoon, the slapstick, visual gags, timing and even the music choices are spot-on, drawing huge laughs almost every time and truly invoking a spirited style that feels like it’s had way more thought put into it than the last creative team. The rest of the movie doesn’t work quite as well as that sub-plot, with some comedy sequences such as an early speed-dating scene not exactly landing, but when the jokes do land they’re significantly better thought-out and executed, like a running gag involving a painfully fake eagle disguise which is a primary source for much of the main plot’s successful slapstick.

The animation is impressive and colourful, the characters are noticeably more tolerable, and the overall filmmaking from the editing to the musical score is a lot less erratic and more streamlined. Overall, this is a stronger Angry Birds adaptation than the previous one, and is even a better animated sequel than The Secret Life of Pets 2 because no matter what this film’s faults are – it still has some humour that will very soon be outdated, most painfully when characters start dancing to the infamous “Baby Shark” ditty that’s been making the rounds on the Internet – at least this movie actually feels like a movie, and not a bunch of episodes from a rejected TV spin-off loosely strung together to resemble a movie. It’s completely harmless material to take your kids to see this summer, and while some parents still might not be as willing to give it as much of a chance as their young ones – especially if they too had to suffer through the first one – my advice would be to at least stick around for that stand-out Hatchling sub-plot, because you will certainly get your fill of classic Looney Tunes comedy whilst the sprogs soak up all the colourful zaniness happening around it.

At the very least, PLEASE take them to see this instead of The Queen’s Corgi. PLEASE? For the love of God, PLEASE?

The Angry Birds Movie 2 is a noticeably more tolerable sequel to the insufferable first film, with much more of a personality to its name courtesy of a brand-new creative team, who bring to the table some inspired, but not always successful, Looney Tunes-style comedy and some overall harmless family fun.

Check out The Angry Birds Movie 2 showtimes in London
via