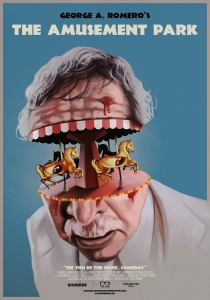 BASICALLY…: An elderly man (Maazel) visits a theme park for the day, only to find himself in the middle of a hellish nightmare…

It’s not every day that you get to review a film by the late horror maestro George A. Romero, especially one that’s taken almost fifty years to finally see the light of day. Originally filmed in 1973, The Amusement Park was Romero’s collaboration with the Lutheran Society, who had commissioned the filmmaker to make an educational film about ageism – but upon realising that hiring the director of Night of the Living Dead and many other zombie movies for a film designed to show the horrors of elderly abuse would result in something far more disturbing than they had realised, the organisation refused to release the film to the general public. The film was considered lost until a print emerged in 2017, the same year as Romero’s death, and it was eventually given a 4K restoration for modern audiences to finally witness it in full, either at festivals or, currently, now streaming on Shudder.

The film has had quite the history, and it’s all well and fun to talk about – but to actually sit down and watch it is another thing entirely. The Amusement Park may be George A. Romero at his most unhinged, and that’s saying a lot seeing how there’s not even a zombie in sight (and no, we’re not counting all the old people – besides, the whole point of the movie is that you shouldn’t make such jokes like that).

After a brief introduction by lead actor Lincoln Maazel, who outlines the basic themes and messages of Romero’s film – which boil down to, essentially, “be nice to old people” – before jumping right into the main narrative: an elderly unnamed man (Maazel), dressed in a white Colonel Sanders suit, is spending the day at an amusement park. Almost immediately, though, the man and several of his septua/octogenarian brethren are treated inhumanely by the park’s staff and its countless other attendees; they are barred from riding some of the attractions because they require those without health conditions or individual income over $3,500 (which I’m guessing, in 1973 currency, was the minimum threshold back then), an elderly couple are reprimanded by actual cops on the bumper cars ride like it’s a regular hit-and-run incident, nobody walking past bothers to help any of them up if they fall or are pushed over, and even the few seemingly good people they encounter end up pickpocketing them or just abruptly leaving them on their own.

The point of the movie, as stated in that opening introduction, is to put the audience in the shoes of an elderly person facing such harsh treatment by more able, mostly younger, people who don’t even stop to think about their feelings or physical needs. Often, though, The Amusement Park plays like an exploitation movie, revelling in the mean-spiritedness of this world and its selfish, inconsiderate inhabitants, while also putting people like Lincoln Maazel through absolute hell and capturing him be tossed around and treated like vermin for most of the 53-minute running time. Maazel’s character is abused so much by society in this film that you’re half-expecting him to become the Joker and shoot Robert De Niro in the head on live TV; his on-screen torture, however, does serve a purpose as Romero uses such harsh and unforgiving imagery to give an abstract, incredibly surreal portrayal of how elderly people do (or did) indeed suffer greatly from the ignorance of others, and it really leaves you in an uncomfortable mood the whole time you’re watching it.

As with many of his other classic films, Romero also inflicts heavy social commentary onto his audience – though, perhaps, not as subtly as some of his most profound work. Romero leans heavily into cartoonish satire here, often showing Monty Python-esque vignettes such as where Maazel and other elderly customers are cruelly neglected at the park’s restaurant, served slop and fries while younger and apparently more affluent patrons are given the five-star experience, complete with a serving of lobster and champagne. Much of the symbolism and visual language is fairly obvious to pick up on, but that doesn’t make it any less tough to stomach as, again, Romero finds ways to make even moments of light comedy seem eerily sinister when you consider the subtext. It never comes across as particularly subtle, especially compared to something like Romero’s Dawn of the Dead which targeted mass consumerism among other things, but in a scare-film that’s less than an hour and designed at frightening younger viewers into caring more for their elders, it oddly makes sense that there’s little left for the imagination.

It’s honestly pointless to harp on a film like The Amusement Park despite all of its glaring production complications (among them scruffy sound design which, even revitalised decades later, goes along with how low-budget the movie looks and feels; many of the other actors in the movie are mere volunteers with zero acting credits before or since) because, at the end of the day, it’s a movie that was made for a simple, understandable purpose: to show extreme cases of ageism to younger viewers so that they may be more cautious about how they treat old people going forward. Had the movie been properly released back in 1973, it might actually have been fun to see people’s reactions to this blatant exploitation piece – albeit an effective one – and if their attitudes might have indeed changed, but watching it in 2021, there is a guilty enjoyment to how brutally and nastily it tries to get its message across, especially in a time period that was much more prudish than it is today.

If you’re curious, then by all means stream this forgotten little gem from a true horror legend – it might not have any zombies in it, but George A. Romero’s harsh educational time capsule is, in many ways, just as terrifying.

The Amusement Park is a harsh but devilishly enjoyable piece of exploitation cinema from horror legend George A. Romero, which revels in its mean-spiritedness and uncomfortable satirical elements tackling ageism in all of its extremities, and leaves you just as disturbed as one of the director’s countless zombie movies.

The Amusement Park is now available to stream on Shudder.