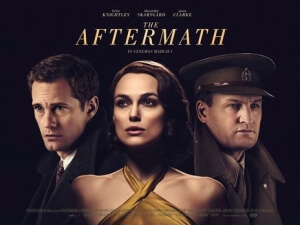 BASICALLY…: In post-war Germany, Rachael (Knightley), the wife of a British colonel (Clarke), becomes passionately involved with the widowed German (Skarsgård) whose house she is staying in…

If you simply must have to see a movie that’s out now in UK cinemas which has Jason Clarke as the third-wheel in a central love triangle, then you would be far better off checking out The Aftermath than you would Serenity; however, don’t count on this one being an exceptionally engaging watch, either, because while Serenity is a far worse film than this, at least it wasn’t dull or predictable as The Aftermath unfortunately is.

Directed by James Kent, who previously directed Vera Britton biopic Testament of Youth, the film is set in Berlin mere months after the end of the Second World War, with much of the city still buried underneath rubble and certain fractions still pledging loyalty to Hitler and the Nazis. Englishwoman Rachael (Keira Knightley) arrives to be with her husband Lewis (Clarke), a British corporal charged with cleaning up the fallen city, and together they make residence in a home that has been requisitioned by the British army – however, Rachael is disgusted to learn that the house’s German former residents, architect Stefan (Alexander Skarsgård) and his teenage daughter Freda (Flora Thiemann), are to also stay with them in the attic. At first, Rachael makes her hostile feelings known to Stefan, but a combination of Lewis’s continued absence and a deep grief for the loss of their child during the war prompts a passionate affair between the two, and soon Rachael finds herself conflicted as she begins to question her own choices.

It’s standard period drama fare that we’ve seen actors like Knightley do numerous times before; in fact, the last film I saw her in was Colette, a much better historical piece that actually played around with Knightley’s seemingly typecast nature in costume dramas and gave her more things to do as an actress than simply look good in a dress or suit. The Aftermath, however, doesn’t really let its lead actress branch out as much – unless you could the rather steamy love scenes with Skarsgård’s Stefan whose persona and physique are straight out of a wartime romance novel – and instead largely limits her to moping about in a nice mansion and shedding tears for her slain young son. She does what she can with the material she is given, as do both Clarke and Skarsgård, but neither of these characters are really unique or interesting enough to transcend beyond just the stock descriptions given to them on paper. Furthermore, some of them making decisions that don’t always leave them looking especially sympathetic, particularly Knightley’s character whose motivations for wanting to bang her hot German housemate are so thin you can let them float about in the wind (and sometimes even resemble the infamous motivations of Lisa from The Room; if you think about it, Stefan does kind of act like Mark sometimes, which I guess makes Clarke’s character Johnny, and personally I am all for a re-enactment of The Room with Clarke in the Tommy Wiseau role… oh, hell, I’m getting sidetracked), and it’s just as though they’re mining for a reason to get to all of the sex that’s far racier than anything in the Fifty Shades series.

However, it does share another common trait with the Fifty Shades movies in that this is the kind of romance with added sexy bits where, when you break it all down, nothing really ever seems to happen. Most of the characters start and end the movie in almost the exact same position they were in before, and in between you’re waiting for the inciting moment that’s finally going to resolve everything in some way, but that moment never really seems to arrive. There is a sub-plot, for example, that sees Skarsgård’s daughter become friendly with a young Hitler loyalist who she’s clearly attracted to, and who is also clearly using her to get information about Clarke’s character so he can kill him, and with all this set-up you’re expecting it to play into the main plot in a major way. Instead, it’s resolved so fast, and way before the actual climax of the movie, that you soon realise there was no real reason for it to be there other than to add some semblance of conflict to an otherwise conflict-free movie. It’s like that sub-plot from the second Fifty Shades movie about the girl who begins stalking Anastasia Steele until she confronts her with a gun; it was something that was all over the trailer in an attempt to trick the audience into thinking that something was actually going to happen, but again like in this movie it’s resolved pretty quickly so the movie can then get back to all the dull stuff it promised it wouldn’t have as much of.

Here, the lack of real dramatic conflict or any particularly interesting lead character really doesn’t make this a particularly satisfying movie to watch, as you’re largely bored by the meandering non-pace that it has set itself, and despite the pretty sets, costumes, cinematography etc it never springs to life as much as it should. It’s a movie best viewed on a warm Sunday evening with your parents who want to put something on to fall asleep to; there’s nothing especially captivating about this movie to warrant a theatrical experience, so you might as well treat it as a made-for-TV movie that managed to get an A-list cast of actors which in and of itself helped get it a nationwide cinema release. However, I feel it’s important to state that this isn’t a wholly bad movie – and again, it’s not even the worst film out right now that also has Jason Clarke be the third-wheel in a relationship – but it has a great amount of flaws that sometimes outweigh its perfectly fine filmmaking and acting qualities, which kind of place it somewhere in the middle where it’s probably going to be forgotten (something, you could argue, is an even worse fate than it just being bad) further down the line.

The Aftermath is a handsome but rather hollow wartime drama that coasts on its impressive production values and strong acting rather than on a script that isn’t interesting or dramatically engaging enough to care about.