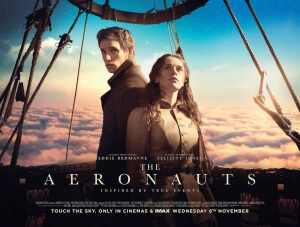 BASICALLY…: Scientist James Glaisher (Redmayne) teams up with gas balloon pilot Amelia Wren (Jones) for a voyage of discovery above the clouds…

This review is of the cut shown at the BFI London Film Festival in October 2019 – the UK release date is currently listed for November 4th 2019.

Kind of like a more down-to-earth version of Gravity – figuratively and literally – Tom Harper’s The Aeronauts is a riveting piece of entertainment. It’s a simple story told simply, with stellar visual effects, stunning cinematography, and a couple of entertaining performances from two very capable leads. It will no doubt become a crowd-pleaser, especially for those who felt that what Alfonso Cuarón’s space-set wonder was missing was some period costumes and a great big gas balloon.

It is also, however, not much more than just a good time. As fun and enthralling as the movie is in the moment, there’s not a lot that really stays with you after you see it, which can sometimes make the film feel as full of nothing but air as the big balloon itself.

Set in 1862 London, we start out as scientist James Glaisher (Eddie Redmayne) waits upon gas balloon pilot Amelia Wren (Felicity Jones) for a voyage up into the clouds. We later learn, through several flashbacks, that Glaisher has recruited Wren to his cause in an attempt to prove his theories that the weather can be predicted in advance, and to do that he must go higher than any human alive has gone before. Wren soon arrives in full theatrical mode, giving the audience a good time while Glaisher is taken aback by her clownish public persona. The two soon set off, though, and soon reach record-breaking heights in their gas air balloon, but not without several dangers in their way as they drift higher and higher into the clouds.

Arguably, the biggest star of the film – beyond even the strong combination of Redmayne and Jones, reuniting on-screen for the first time since the Oscar-winning The Theory of Everything – is the filmmaking. Harper manages to properly replicate what it is like to be so far up into the clouds, through a combination of dazzling visual effects and tricksy camerawork that leave you enthralled when you’re not feeling dizzy from all of the vertigo. The cinematography definitely calls back to Gravity at times with certain close-up shots of actors’ faces and camera movements that put you right there in the middle of the action, but it feels like it has enough of its own voice to stand out as its own fine piece of entertainment. It is an immersive experience, but a good enough one to leave you mostly satisfied.

Yet, there’s not enough meat on its bones to sustain the appetite. Character arcs and story beats are largely predictable, many of them coming from the flashback sequences that largely feel unnecessary when you know exactly how things are going to play out, and you get the feeling that if the film were just a real-time re-enactment of the central voyage, capturing the whole thing from the moment it starts to when it finishes, it probably would have been more effective. Instead, they tend to take you out of the moment, because it’s going from a well-crafted survival story to something that’s more streamlined and by-the-numbers when it comes to period dramas. There is the natural chemistry between Redmayne and Jones to carry you through a large majority of it, but there’s not a lot else to these characters or even parts of the story that feel strong enough to carry those moments.

I also feel that not a lot is being made of the fact that, while the movie is heavily inspired by fact, it contains a few dramatic liberties too far that might end up being misrepresentative of the actual events. Most notably, Jones’ character Amelia Wren is entirely fictional, an amalgamation of several other figures who made Glaisher’s voyage possible such as fellow aeronaut Henry Coxwell, who in reality accompanied Glaisher on the journey. There’s nothing inherently wrong about inserting a fictional character into a real-life narrative, but in a case like this where it’s effectively airbrushing an actual person with proper credentials to their name, it feels somewhat ingenuous to the memory of that person. Unsurprisingly, historians as well as ancestors of Coxwell have been vocal about their disapproval of the film, and by some margin I’m inclined to sympathise with them, as wiping a celebrated figure in lieu of a fictional female lead feels a little cynical on the part of the filmmakers.

If you look past the fact that the historical accuracy is debatable at best, does the movie work as a whole? Just about, but not enough to say that I enjoyed every moment of it. It’s nothing more than an entertaining crowd-pleaser, one that’s perhaps riddled with too many flaws to overlook, but in the moment is a fun enough experience that people will easily be pleased by.

The filmmaking behind The Aeronauts is definitely something to behold, but unfortunately when it comes to substance the film begins to deflate.

The Aeronauts is an entertaining and immersive cinematic experience, with some stellar filmmaking replicating what it feels like to be so high above the clouds, but when you strip the film down to its barest essentials it ends up looking bare, from a disjointed narrative to a worrying historical inaccuracy that’s well-intentioned but undermines some of the real heroes of this particular story.

Want to decide what the movie’s like for yourself?
Check out The Aeronauts showtimes in London
via