The Adventures of Wolfboy (Review) – A Pinocchio-Like Modern Fairy Tale 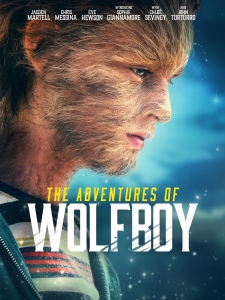 BASICALLY…: A young teen (Martell), born with a rare condition that sees hair grow all over his body, sets out on a soul-searching journey…

Oddly enough, The Adventures of Wolfboy shares some spiritual DNA with last year’s ambitious retelling of Pinocchio; both are films that really embrace their fairy tale roots (this one especially), and aren’t afraid to get a little dark and rough in front of their younger audience members.

If you had to ask me which one was better, though, it’s a tough call. While I would perhaps be more inclined to favour Pinocchio because, from a visual standpoint from its make-up to its production design (both of which have just been nominated for Oscars, incidentally), it’s way more impressive and articulately crafted, there is still some charm and whimsy to be found in The Adventures of Wolfboy, including its keen eye for classic storytelling and its sweet coming-of-age story right at the core, which are enough to forgive some of its more glaring setbacks.

The film’s main character is Paul (Jaeden Martell), a 13-year-old boy who was born with a rare condition that makes his hair grow all over his body, leaving him looking like – what else? – a wolf. Because of this, he’s incredibly shy and insecure, and after an argument with his well-meaning but useless father (Chris Messina), he decides to run away from home and head to Pennsylvania, where his birth mother (Chloë Sevigny) is said to live. Along the way, he comes across a bunch of interesting characters, including a young singer named Aristiana (Sophia Grace Gianni), an eyepatch-wearing convenience store robber (Eve Hewson, recently seen bewildering Netflix viewers in the mini-series Behind Her Eyes), and a strange but sinister carnival owner known as Mr. Silk (John Turturro, who also executive produces), the latter of whom is hunting Paul down after a fiery encounter.

The script by Olivia Dufault divides the story into storybook-esque chapters, combined with grand illustrations one would usually find in one of those tomes, each signalling Paul’s encounter with real-life people with their fantastical counterparts; Aristiana is referred to as “the mermaid”, Rose is “the pirate queen”, and so on. They really enforce the overall notion that this is all one great big modern-era fairy tale, and in many ways it is, with both Dufault’s script and Martin Krejcí’s direction echoing the magical realism of similar films like Edward Scissorhands and both the recently-reviewed films Gagarine and Undine, within a narrative that has plenty of wonder in its soul and a gentle, sentimental nature that is easy to digest.

It’s also a nice story for people who, like the main character, feel like their differences overwhelmingly define them. Paul’s journey follows him as he grows from an introvert, afraid of the big bad world and openly admitting to hating himself for how he looks, to a young man who gradually becomes more accepted by the other outcasts in society, is full of heart and open-mindedness, and while the make-up plastered all over actor Jaeden Martell’s body isn’t always entirely convincing (some of it looks like it was put on in a hurry just before cameras started rolling) the It actor delivers a reserved but endearing performance that’s believably innocent. Another sign that the movie is wholly embracing people’s differences is in its decision to cast young transgender performer Sophia Grace Gianni as, well, a transgender performer, which in this day and age shouldn’t be revelatory casting (I, like many others, believe the trans community deserves more opportunities in film than they’re currently getting) the actress is a lively presence who serves as a fine companion to our main hero.

There are a number of times in Dufault’s script, though, where the tone and pacing becomes unevenly balanced. During some sequences, such as one set in a dog pound, it cannot seem to decide if it’s going for something whimsical or grounded in reality, and it runs into difficulty trying to appease to both at the same time. Most characters stick around for as long as they need to before departing, but others like John Turturro’s Mr. Silk are given perhaps more screen time than they’re allocated, often leading them nowhere or to some anti-climactic resolutions (I do honestly think that the only reason this character is around for this long is because executive producer Turturro wanted more chances to stretch out his hammy performance).

While it’s not the most perfectly assembled modern-day fairy tale (hell, it isn’t even the best one I’ve seen in the last few days), there are fine things to admire about The Adventures of Wolfboy, even though not all of it will have you howling for more.

The Adventures of Wolfboy is a mostly charming modern-day fairy tale which gets plenty of mileage out of its storybook-esque narrative and sweet messages for young people, though its sometimes uneven balancing of tone and pace leave it slightly less than the sum of its parts.

The Adventures of Wolfboy is out now to rent or buy on digital platforms, including Amazon Prime Video.