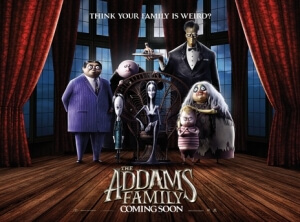 BASICALLY…: The eccentric Addams family move to the suburbs of New Jersey, where their odd ways of living come into conflict with the neighbours…

“They’re creepy and they’re kooky, mysterious and spooky, they’re all together ooky, The Addams Family,” so goes the catchy-as-hell theme to the classic TV show (you’re forgiven if you also did the finger snaps while reading those lyrics). That, as well as the two successful live-action film adaptations and several other TV iterations in both live-action and animated form, are what have spawned from cartoonist Charles Addams’ original creations, and their high profile in the world of pop culture is so strong that just saying names such as Morticia Addams, Uncle Fester, Cousin Itt etc will immediately be recognised by many others.

Because it is such an iconic property, as well as the fact that they were originally based on cartoon characters, it makes sense for The Addams Family to be rebooted for the big-screen in animated form, with character designs that are much closer to how they were originally drawn, and an overall lenience towards a younger audience who may not have heard of any of these characters. However, as a new version of a series that is best known for some pretty dark humour and a gothic tone, it plays things very safe, which ultimately makes it a rather bland reintroduction to this world and these characters.

The film begins as newlyweds Gomez (Oscar Isaac) and Morticia Addams (Charlize Theron), exiled from society by angry mobs, shack up in an abandoned mansion just above the suburbs of New Jersey. Thirteen years later, they live an idyllic and isolated existence with their children, Wednesday (Chloë Grace Moretz) and Pugsley (Finn Wolfhard), with the latter training for an upcoming Bar Mitzvah-type event that will see their extended family come to witness. However, they soon come face to face with some of the locals, including vapid homemaking reality show host Margaux Needler (Allison Janney) who sets out to get rid of the Addamses by any means necessary.

As a reintroduction to the world of The Addams Family, it serves as a basic-level starting point. The characters are presented with their one or two defining traits, and aren’t really explored any deeper than that. The settings and overall designs are certainly gothic and appropriately dreary, but again that’s as deep as it gets into any of it. For children, especially those largely unaware of this property, it’s a decent place for them to at the very least become familiar with who these people basically are, but for adults who have a lot more history and knowledge of everything Addams related, it might be somewhat isolating for them, as this is a story written specifically with young children in mind, and so a lot of the bleak gallows humour that many will remember from previous iterations of the characters is effectively removed and replaced with things that aren’t quite as potentially offensive. Because of this, the film feels very neutered, and all too safe for the sake of its younger audience which is fine for them, but for others it’s not quite the same as it used to be.

A new version of something like this can work, if it was at least funny and entertaining in its own right; instead, the film’s humour is very hit-or-miss (emphasis on “miss”), consisting mainly of puns and obvious visual gags, and the story itself is very basic and not especially inventive, appealing only to younger audience members who will likely be more interested in this film than the adults. It has social commentary that’s very heavy-handed, particularly the takedown of vapid reality show stars which in and of itself is a cliché in most animated films nowadays, and an all-too-easy conclusion that sees certain people do and say things that feel somewhat out of character for them at this point. Some of the characters can be pretty irritating, particularly Nick Kroll’s lispy take on Uncle Fester which got under my nerves a few times during this movie, but the excellent casting of some iconic characters – including Oscar Isaac, who would have been equally perfect as Gomez Addams in a live-action movie, and Charlize Theron, who brings dry with to the character of Morticia – does lend the otherwise thinly-written characters some level of gravitas.

At times, even the animation feels off-putting. There’s nothing about it that truly pops out in animated form, other than some of the character designs, because the way it moves and how it functions in scenes of slapstick is blandly straightforward, even ruining some of the timing during some of the film’s few inspired gags. The movie wasn’t made for a huge amount of money – $40 million to be precise, and it’s already made enough of it back to warrant a sequel in a couple of years’ time – so it’s not like the movie had the resources to make convincing-looking CG animation or anything, but even still there are moments where certain designs of settings and characters could have had more thought put into them, because they look so pedestrian and unadventurous that it’s not all that interesting to look at.

This is a version of The Addams Family that exists only to appeal to young kids, and if they get more of a kick out of the movie than adults do, then its mission is fulfilled. For the rest of us, though, it’s a pretty bland reintroduction to some classic characters, and not entirely worthy of the creepy, kooky, mysterious and spooky legacy the property has inspired.

The Addams Family is a reboot that appeals more to younger audience members than older fans of the property, which takes the edginess away and replaces with something blander and less interesting than what people normally associate this franchise with.

Want to decide what the movie’s like for yourself?
Check out The Addams Family showtimes in London
via