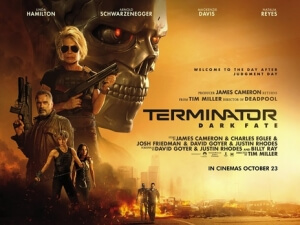 BASICALLY…: Twenty-seven years after preventing Judgement Day, Sarah Connor (Hamilton) protects a young woman (Reyes) from a new Terminator (Luna) that has been sent from the future to kill her…

It’s no secret that all Terminator sequels past Terminator 2: Judgement Day all lacked the true spark that brought the first two films to thrilling life; in case you need a recap, Terminator 3: Rise of the Machines was a silly and occasionally campy action B-movie with a killer ending (literally), Terminator Salvation tried doing something different but didn’t leave much of an impact, and Terminator: Genisys was, well, Terminator: Genisys.

Luckily, Terminator: Dark Fate takes the Halloween H20 option and erases all sequels bar Judgement Day from existence, effectively making this the new, and true, Terminator 3 (despite it being the sixth overall film in the series). Not so luckily, the film still doesn’t match the true sophistication of the first two movies – but unlike the other sequels, this one comes closest to feeling like a true successor to James Cameron’s first two action blockbusters.

Cameron returns to the series for the first time since Judgement Day, albeit in a producing role as well as obtaining a story credit, with directing duties now going to Deadpool’s Tim Miller, who turns out to have been a fine choice to bring a decent amount of entertaining action to a series that until recently was starting to stretch itself thin in that department. More significantly, though, this movie also marks the return of Linda Hamilton as Sarah Connor, not seen on screen since Judgement Day, and as soon as she shows up you can feel the hole that had been left by her absence in the other films slowly filling up with a concrete mix of bad-assery and genuine human emotion.

Connor isn’t the primary focus of the film, though; that is saved for the story of – wait for it – a young woman who is targeted by a lethal Terminator sent from the future, and who is protected by a warrior also sent from the future. In this instance, the young woman is Dani Ramos (Natalia Reyes), the Terminator is a new model played by Gabriel Luna, and the futuristic warrior is Grace (Mackenzie Davis), an “amplified” soldier who’s been converted into a cyborg. Connor comes into the picture a little later, and – because it wouldn’t truly be a Terminator film without him – so does Arnold Schwarzenegger, as a T-800 model who’s now living his own life in unexpected ways.

Sure, the set-up is very familiar and it doesn’t take a rocket scientist to deduce where it’s all going to go, because it is so similar to the first two Terminator films, but Dark Fate feels like something which was truly made out of pure love for the series, similar to how films like Star Wars: The Force Awakens and more recently as last year’s Halloween were made by people who are passionate about the material, and not just looking to make a cynical, soulless follow-up. Unlike the other sequels, this one has more of a focus on the characters, their backstories, the mythology surrounding the post-apocalyptic future, and especially an appetite for balls-to-the-wall action, which the others either lacked or just didn’t do as effectively. Most of all, it definitely feels like something that could easily exist within the same continuity as the first two films, retaining their adult themes, hyper-violence, sweary dialogue, and even a couple of truly suspenseful scenes that harken back to the original Terminator’s much darker tone. Miller proves himself a very competent action director, as he directs scenes that actually let you see the action unfold (bar a couple of sequences which take place in the dark), and brings a bit of gleeful energy that gets you pumped up for the next big showstopper, although some shots and music cues certainly border on fan-service overkill.

A huge part of what also makes the film rather entertaining is seeing Linda Hamilton back in her signature role after all these years. In that time, the character of Sarah Conner has been played twice by other actors in both film and television – funnily enough, both times by Game of Thrones alumni Lena Headey and Emilia Clarke – but Hamilton has always been the one to bring weight and complexity to the part, and for the first time since Judgement Day the series recognises that it’s her – not Arnold – that’s been the real central figure of this whole story, which makes this feel like even more of a step-up from the previous sequels. Hamilton is awesome, the newer cast members – from Mackenzie Davis’ cool warrior character to Gabriel Luna’s menacing new Terminator – fare well alongside her, and as for Arnie himself he has a lot of fun with showing a side to the T-800 that’s surprisingly never really been done before in any of these films. However, even Schwarzenegger bows down to the fact that this is Linda Hamilton’s show, and she makes all those years without her Sarah Connor on-screen worth it.

The movie is very entertaining, and easily the best Terminator movie since Judgement Day, but for everything it does right it still can’t compete with the first two classics (although I’m one of those people who likes the first film more than the second). However, seeing how the other sequels never captured that same spark either, that shouldn’t be too surprising – what IS surprising, however, is how much better this film is at trying to recapture it, and for that the movie earns its right to exist, and – if potential box office success ensures more sequels like this – be back.

Terminator: Dark Fate is the strongest Terminator film since Judgement Day, retaining the familiar but reliable themes, strong action, and a welcome return for Linda Hamilton as Sarah Connor, although it still quite can’t capture the magic of the first two films.

Want to decide what the movie’s like for yourself?
Check out Terminator: Dark Fate showtimes in London
via