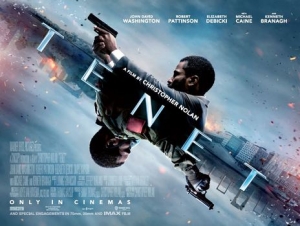 BASICALLY…: A secret operative (Washington) is tasked with preventing a Third World War by using a mysterious time-bending method…

It may be the first major blockbuster to be released in cinemas post-lockdown, but the real revelation about Tenet is that, in typical Christopher Nolan fashion, it’s the director’s most ambitious experiment with time since, well, the last Christopher Nolan movie. The concept of time has always been a major staple in his movies, from the backwards storytelling of Memento to the varying levels of motion in Inception to the non-linear structure of Dunkirk, but Tenet marks the first time in his filmography where time itself is a full-on MacGuffin; specifically, the ability to inverse it and stroll backwards through time as one would stroll forwards.

If you’re struggling to keep up with even that basic description, be warned that the movie does not get any easier to understand (although, as one character says, “don’t try to understand it, but feel it”). Regardless, this is a film where you’re either along for the ride or not, and personally I found this to be an exhilarating, thoroughly entertaining movie that deserves to be seen on the biggest screen possible.

Nolan’s film is structured like a James Bond-type spy thriller, with our hero – only ever identified as the Protagonist (John David Washington) – being recruited into a mysterious organisation known only as Tenet, from whom he learns about the concept of time inversion as well as the fact that Russian arms dealer Sator (a menacing Kenneth Branagh) is communicating with the future, the consequences of which could result in the end of the world. The Protagonist, along with his handler Neil (Robert Pattinson), attempts to get close to Sator through his estranged wife Kat (Elizabeth Debicki), who the Russian menace still has a controlling and abusive grasp over, and from there it’s a cavalcade of intense action sequences and lengthy Nolan-style exposition, with a little bit of physics-bending time alteration thrown in for good measure.

If you’re not already a fan of Nolan’s work, or if you’re starting to grow weary of his cerebral and expository style, then this movie won’t convert you and maybe put you off him even more, because like the majority of his films it relies heavily on explaining its complicated set-up through long conversations and dazzling visual sequences, pushing traditional storytelling elements like character development and emotional depth off to the side. It’s a style that’s bound to alienate some critics and audiences, and understandably so, because there is a lot of plot and explaining of said plot that’s being thrown at you here, and it’s tricky to take it all in right away, especially when it’s constantly moving along from one major set piece to the next. There’s no time to properly get to know many of these characters – we know so little about the main character that we never even learn his real name – because there’s just so much of this plot and its central sci-fi aspect to dissect, and that can be damaging to any audience member wanting something deeper than a mere action film with plenty of ideas in its workshop.

However, if you’re willing to just sit there and accept whatever’s happening, even if it’s difficult to understand, the movie works as an intricate action-thriller that feels like a stealth love letter to spy movies, with plenty of its own voice to stand amongst the titans of the sub-genre. There is not a dull or boring moment in the entire film, which always holds your attention with incredible set-pieces such as the crashing of a giant Boeing 747 plane – which, like the rest of the film, looks absolutely stunning on IMAX – and some truly awe-inspiring fight choreography that takes as much advantage of the reversed time element as it possibly can. Even the characters, as thin as they may be on paper, are given a lot of life by actors who completely immerse themselves into the anything-goes world this takes place in; John David Washington is a charismatic lead, getting in a few good quips every now and then while maintaining believability as an action hero, while the likes of Robert Pattinson, Elizabeth Debicki and Kenneth Branagh all do well in delivering long, monotonous pieces of exposition as naturally as they can make it sound. On a technical aspect, it’s another winner for Nolan; gorgeously shot by cinematographer Hoyte van Hoytema, and set to a thumping score by Ludwig Göransson (standing in for Nolan’s regular composer Hans Zimmer), the film is gloriously made which always holds your interest even when it’s nearly impossible to decipher exact plot details that are unfolding right in front of you.

Though I personally enjoyed myself quite a bit during this movie, I do understand why anyone else might not have as much of a good time. It is a lot to take in at first, and the absence of certain storytelling motifs in favour of full-on explanations can be hard to grasp, but if you’re willing to just go along for the ride then it’s a pretty sophisticated and impressive one to experience, especially if it’s your first trip to the cinema in months.

Tenet is a highly ambitious and thoroughly entertaining new epic from Christopher Nolan, combining several aspects of a spy thriller with an intricate sci-fi element, all done in Nolan’s signature style which might not win over any sceptics of his work nor even be that easy to follow, but works as an enthralling action-thriller if you’re willing to just go on this journey and have a good time during it.

Want to decide what the movie’s like for yourself?
Check out Tenet showtimes in London
via