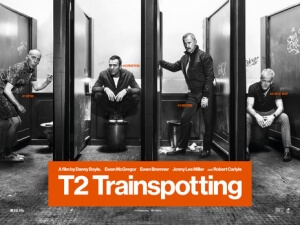 BASICALLY…: Twenty years after betraying his friends, Renton (McGregor) returns to Scotland to make amends with them…

Last year, there were more than a few sequels that came out to films that debuted one or two decades ago, and the vast majority of them sucked. But no matter how hard they tried (which a lot of them really didn’t), the likes of Independence Day: Resurgence, Zoolander 2, My Big Fat Greek Wedding 2, Blair Witch and Bad Santa 2 could never recapture what made the original films so memorable in the first place, because at the time they were the cultural equivalent of capturing lightning in a bottle, something unique and mesmerising that could never be replicated again regardless of the effort.

However, in the case of T2 Trainspotting – the long-awaited sequel to Danny Boyle’s 1996 breakthrough film – the lightning has not only been recaptured in that bottle, but extra precautions have been made to ensure that the entrapped piece of electricity flows naturally within its confinements. It is the rare type of follow-up that is exactly on par with its predecessor, and like some of the best sequels is a worthy successor that works both as a sequel as well as its own standalone film, one where you don’t necessarily have to watch the first one in order to work out what’s going on – though it is recommended, as Trainspotting is a damn good film, and so is its sequel.

The film picks up twenty years on from when we last left our small band of drug-addled misfits, including Renton (Ewan McGregor), Spud (Ewen Bremner), Sick Boy (Jonny Lee Miller) and Begbie (Robert Carlyle). The last time we saw them – by the way, spoilers for anyone who still hasn’t seen the original – Renton had stolen £16,000 in cash from the group’s heroin deal after finally getting sick of their antics, especially Begbie’s psychopathic nature. Two decades later, Renton returns from his home in Amsterdam to Edinburgh to make amends with the friends he had betrayed, and the film is spent catching up with these characters and their lives twenty years later, and how they’ve changed and also not changed a bit. Sick Boy is now a coke-fuelled pimp who’s secretly filming people having sex with his Bulgarian prostitute girlfriend Veronika (Anjela Nedyalkova) to use as blackmail; Spud is trying to kick his old habits, and is persuaded to start writing; and Begbie has just escaped from prison, vowing revenge against Renton.

As well as the majority of the original cast, including then-unknown Kelly Macdonald who turns up in a small cameo, Boyle returns to direct and John Hodge, who was nominated for an Oscar for the first film’s script, returns to write the script, which itself takes inspiration from Irvine Welsh’s novels featuring these characters. In many of these technical aspects – aside from swapping out original cinematographer Brian Tufano with Slumdog Millionaire’s Anthony Dod Mantle – it definitely looks and feels like Trainspotting, right down to the opening shot of two feet running away from the camera (in this instance, it’s on a treadmill), and it’s pretty awesome to see most of the original creative team come back to make a film that in every way shape and form feels like a natural predecessor, and not something that very clearly is trying to mimic the original’s style. Mantle’s cinematography in particular very closely resembles Tufano’s work on that film, so much so that you actually wonder if Tufano himself came back especially to do this instead, and Hodge is a writer who knows these characters inside and out, so with each new development it never feels completely out of character for this person to do such and such. If anything, this film humanises them a bit more than the original did, particularly Carlyle’s Begbie character who with one wrong flick of the pen could have easily been a two-dimensional psychopath, but thanks to some strong writing gets some scenes here that show there’s an actual person underneath his dangerous macho persona.

Carlyle is part of the film’s big selling point, that the original cast as well as Danny Boyle are returning, and the film thrives on the participation of both cast and director. Out of the returning on-screen quartet, Carlyle is really good and absolutely frightening as Begbie, but at the film’s heart is undoubtedly Ewen Bremner’s Spud, perhaps the most lovable heroin junkie in film history, especially in this film which more or less positions him as the film’s emotional centre, and by God you just feel so bad for this guy who’s frequently succumbed to addiction and isolation over his life, and in his middle-age is finally starting to realise it may be too late to finally pick himself back up. Make no mistake, T2 Trainspotting is a much darker film than the first one in the sense that it’s dealing more with just how much these people’s past mistakes are finally coming back to haunt them, and what Boyle does that’s really great here is that he balances the tone really well so that even when the film does call back to the original with certain shots and scenes, soundtrack placements et al, it never undermines the sheer humanity at its core. Luckily, it’s also a very funny movie, with several moments of black comedy littered throughout the film, like a character giving someone firm advice on where to stab them with a shank, or singing an improvised anti-Catholics song in a predominantly Protestant pub, or other scenes that firmly keep your interest and enjoyment levels considerably high all throughout (no pun intended).

It’s surprising how much T2 Trainspotting just knocks it out of the park, especially if you saw and loved the first film; for once, this is a sequel that has been years in the making, and finally upon release doesn’t feel like it’s too little, too late. If anything, its themes of pining for the past as well as a need to atone for mistakes of that past feel more relevant now than even back in 1996. If you’re looking for a damn good sequel, choose this.

T2 Trainspotting is a sequel that is firmly on par with its cult classic predecessor, looking and feeling like a natural follow-up thanks to the participation of the original cast and director Danny Boyle, and is a damn good bit of entertainment in these dark and brooding times.