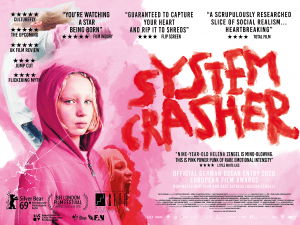 BASICALLY…: A disturbed nine-year-old (Zengel), placed in the child welfare system, drives nearly everyone around her to despair…

If you’re a parent and have to deal with your children being home from school during the shutdown, fret not, for it could be worse: you could be dealing with young Benni Klaaß in your company.

The nine-year-old girl, played by Helena Zengel in Nora Fingscheidt’s System Crasher – Germany’s entry for the International Feature Film category at this year’s Oscars, although it wasn’t selected in the end – is every child-minder’s worst nightmare. She screams and swears constantly, she is prone to severe anger fits which include unpredictable amounts of violence, and to top it all off she cannot seem to follow a simple instruction if it somehow doesn’t end up with her getting her own way. No family is strong-willed enough to take her in. No carer can calm her down. Not even her own biological mother (Lisa Hagmeister) can bear to be around her. Put simply, Benni is the kind of problem child that would make Damien from The Omen look like Lisa Simpson by comparison.

And yet, she is also an extremely tragic concoction. Deeply traumatised by unclear early events in her life – so much so that the mere touch of her face from any other person than her mother causes her to completely lose control – and tossed around from one care home to the next unfortunate foster family, she longs for what any child wants, and that is to be unconditionally loved. Sadly, almost none of the adults around her are up to the task; they see her as a kid who, no matter what they do, is beyond repair and is only good for institutionalised care, for which she is too young by just a few years. In many ways, they’re right; the trauma that befalls this young girl is clearly too hazardous to tame, and it would be foolish, even arrogant, for anyone to think that they can step in and fill the void that she desperately needs at this point in her life. It certainly doesn’t stop Benni’s new school escort Micha (Albrecht Schuch) from attempting to dig towards the root of her problems, which he tries to achieve by taking her to a remote cabin for an extended period of time where she must help fetch milk and other chores, but even he faces the consequences when she – and even him, to an extent – forms way too close of a connection with her new minder.

As much as it appears that there is no saving this kid, there is always at least the possibility to try and understand her. What Fingscheidt does well with this film is that she places the audience into the shoes of an observer, who is constantly monitoring her behavioural patterns and sudden temperamental shifts from afar, and is asked to form a meaningful analysis of what this girl is all about. It’s not always easy, because Benni is a character that has mood swings as sharp as the razor-edge of a pendulum, which thus make it hard to define what is her true personality and what she is putting on as part of her show, but the filmmaker at the very least lets us have enough of the outlines so that we can piece together a rough idea of what she’s gone through that’s led her to this point. Sharp, sudden on-screen flashes reflect a growing resurgence of past traumas whenever she gets too wild, or is on the verge of becoming so, which signals an uncontrollable rage brewing inside of her that stems from a mixture of abandonment issues – her mother effectively tossed her into care while still retaining Benni’s younger siblings – and the most vital ingredient for any child’s well-being, that of a genuinely caring figure in her life.

It’s a gripping story of childhood, told from the perspective of the worst-case scenario when it comes to problem children such as Benni, and young Helena Zengel delivers a masterfully fearsome performance that’s full of rage, energy, and unpredictable chaos which carries the entire movie through its often unsettling nature. Like the vast majority of adults around her, you are simultaneously terrified and annoyed by her out-of-control antics, but also mindful that you are also witnessing this very vulnerable young girl go through unspeakable levels of trauma in her own unconventional way; Zengel nails each and every emotion this character is written to convey, almost frighteningly so, all up to a point where, when you find out that her next big film role is opposite Tom Hanks (in the upcoming Paul Greengrass period drama News of the World), you’re immediately concerned about the star’s mental well-being from acting opposite her than his current bout with coronavirus.

Though not an easy watch by any means, especially if you are weary of the child welfare system that has housed and dealt with many problematic children such as the one in this movie, System Crasher is incredibly compelling because you’re always waiting to see what state this child ends up in. Will a miracle arise and set her straight once and for all? Is she doomed to live a life of uncontrollable rage? Who knows, but the fact that you’re invested enough to care about what will eventually happen to her is the sign of a strong script with themes that any adult can identify and relate to, as well as a firm director who is keen to hone in the point without going too overboard, and especially a breath-taking turn by a young actress that puts some of her older co-stars to shame.

If nothing else, it’ll make you glad that your kids aren’t as restless during this lockdown.

System Crasher is a deeply effective study of an out-of-control child’s need to be tamed and loved, with a strong script containing tough but identifiable themes, tight direction from Nora Fingscheidt, and a fearsome – but also fearless – leading turn by young Helena Zengel, all in a film that is anything but systematic.

Want to decide what the movie’s like for yourself?

Check out System Crasher on Curzon Home Cinema – do your part to support cinema during the coronavirus (COVID-19) pandemic.