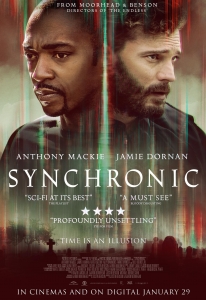 Following on from their super-low-budgeted genre outings Resolution, Spring, and most recently The Endless, filmmakers Justin Benson and Aaron Moorhead now present their biggest film to date – and it still looks like it can’t have cost more than a few million to make, if even that.

However, that isn’t to say that Synchronic, the duo’s fourth feature together, fails wildly because of budget limitations – as we’ve seen previously with The Endless, these guys can execute some incredibly fascinating ideas even without a standard Hollywood backing – and as a matter of fact, there are a handful of really interesting things about the film which perhaps a larger investment may have curbed somewhat. After all, when you have a clear idea of what you want to do, why jeopardise that by bringing in studio executives who want safe returns on their investment?

In a film that is most certain Benson and Moorhouse’s movie through and through, Dennis and Steve (Jamie Dornan and Anthony Mackie respectively) are two paramedics in New Orleans, who begin arriving at increasingly bizarre scenes where people have been gravely injured or even killed under strange circumstances. As it turns out, the culprit is a new designer drug called Synchronic, the effects of which appear to be so hallucinogenic that it causes people to experience things so out-there that to call them “out-of-body” would be somewhat inaccurate. However, when Dennis’ teenage daughter Brianna (Ally Ioannides) suddenly disappears after apparently taking the drug, it falls to Steve to investigate the effects of the drug to see what – and how – things transpire under its influence.

To say any more about what the drug can actually do would be to give away the surprises that are best left for you, dear audience, to discover for yourselves. You should know, however, that it certainly keeps with similar themes introduced in Benson and Moorhead’s previous films, and further shows the sheer amount of imagination on display from both of them who, through a combination of directing, writing, cinematography and editing, exhibit bold and intriguing new takes on classic sub-genres while introducing some compelling themes in the process. Topics such as mortality and fate are sprinkled all throughout Synchronic, especially when one of the main characters receives and reacts to some tragic news, but when they tie into later themes, they suddenly take on new meaning that makes things a lot more compelling, and the beauty of Benson and Moorhead’s creativity is that they consistently find ways to introduce and then re-introduce things that feel different every single time.

How they let certain things unravel here makes for some rather thrilling entertainment, which can be intense, funny, and wildly unpredictable (sometimes all at the same time), and with the star qualities of both Jamie Dornan and Anthony Mackie on full blast – the latter especially having fun with some of the killer lines and deliveries he’s been directed to give – there’s also an unexpected charm that blossoms from their camaraderie. The actors’ top turns nicely compliment the ambitious filmmaking, which makes full use of whatever small budget that Benson and Moorhead have been given by flaunting some decent (for this budget) visual effects and a dull-ish colour grading that suggests there wasn’t enough time or money to give it a glossier look. The filmmakers also incorporate a lot of stylish one-takes, including an opening scene of the two characters entering a junkie’s house, and another where the two of them are simply talking like old buddies, all of which have a certain panache for simplicity while simultaneously working with some very gutsy ideas and themes.

Like their previous films, Synchronic is rather well-executed under the monetary circumstances, and it leaves one thinking what these guys could do if given a sizeable Hollywood budget and carte blanche to do whatever the hell they want (we might get a glimmer of that sooner than you think, because as of writing the duo have recently signed on to direct episodes of Marvel’s upcoming Moon Knight series starring Oscar Isaac). That being said, part of me still thinks if that were to actually happen for them, their boundless creativity might be stifled by numerous notes from producers; their ideas, imaginative as they are, are certainly not safe for mainstream audiences, and could very well be subject to creative changes that might force them to alter their vision for the sake of making more money. Hopefully, any big producer who does decide to take a chance on Benson and Moorhead will have the sensibility to just trust them and let them do what they feel is best, because they clearly have a strong shared sense of imagination which they’ve already proven they can execute with a mere fraction of a blockbuster budget, and to stamp out their unique brand of genre storytelling would undermine their true filmmaking spirit.

Until that day eventually comes, Benson and Moorhead can continue to wow viewers with their frivolous creativity in their initial small-budgeted features, of which Synchronic is only the latest and equally impressive in what is hopefully a long career for the both of them.

Synchronic is a fascinating and highly entertaining film which benefits from the surprises that filmmakers Justin Benson and Aaron Moorhead have in store for viewers to discover, as well as some bold and creative ideas that they impressively convey even on a relatively small budget.

Synchronic is out now to rent on digital platforms including Amazon Prime Video and Sky Store.