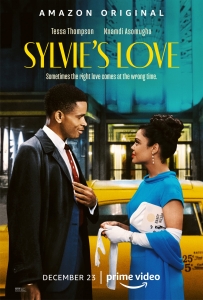 Almost right away, there is an old-fashioned quality to Sylvie’s Love, right down to the grainy opening shots of early 60s New York as a smooth jazz number plays on the soundtrack over credits that list both the actors and their character names. It’s a fittingly retro opening for a period piece that also feels like it could well have been made in that exact era, and a subtle alarm that the story we’re about to see unfold is not going to be that much different from traditional romances of this particular time – however, while the ingredients are often familiar, Eugene Ashe’s sweet and charming film uses them with strong elegance and wilful power, overcoming its traditional trappings to deliver a timeless tale of love and ambition.

On this particular night in 1962 New York City, a woman named Sylvie (Tessa Thompson) is waiting for her cousin Mona (Aja Naomi King) outside of a theatre, when suddenly a handsome man she immediately identifies as Robert (Nnamdi Asomugha) comes into view. Cut to five years earlier, when Sylvie is working at a record store owned by her father (Lance Reddick), even though she’s much more interested in one day producing her own television content. Meanwhile, Robert – a saxophonist in a up-and-coming jazz band – takes a day job at the record store when he notices Sylvie working there, even though she has a fiancé who’s currently fighting over in Korea. Regardless, the two of them soon hit it off, but their summer of love comes to an end when they are both predestined for different career paths. They bump into each other once again outside that theatre five years later, but with everything they’ve become – he still a part of the reasonably successful band, she a married housewife and mother who’s just taken on an assistant role at a local television studio – their mutual attraction face some new challenges before they may or may not reach their eventual happy ending.

The film uses a very traditional romance movie template, from the initial meet-cute to grave misunderstandings and potential third-act breakups, so don’t expect Sylvie’s Love to rewrite the rulebook on the genre any time soon. However, the familiarity shouldn’t be a hinderance as long as the overall execution is strong enough on its own, and luckily writer-director Ashe is a strong enough filmmaker to not only make the central romance work, but also make it central to the film’s beating heart. The air of bigotry in this time period is all but evaporated here – only one backhanded comment about race is uttered, while the ongoing civil rights movement is literally relegated to the background – which leaves more room for Thompson’s Sylvie and Asomugha’s Robert to grow and develop their bond without any of the period’s racism getting in their way. That turned out to be a wise move on Ashe’s part, because both Sylvie and Robert are likeable characters in their own unique ways, and the actors share a very strong chemistry that reflects well on both the sensibilities of the time period as well as the natural charisma of Thompson and Asomugha alike.

Ashe also brings a warm aesthetic to his filmmaking, including some gorgeous 16mm cinematography by Declan Quinn who utilises the grainy film stock look to give the impression of a nostalgic visual palette you’d often find in the late 50s and early 60s. A smooth jazz score by Fabrice Lecomte, and a soundtrack of classic hits by the likes of Sam Cooke and Bill Haley & His Comets, also liven the atmosphere whenever it’s required, and compliment the ever-changing world of music that Robert strives to be a part of. It is a very handsome movie, both in looks and in spirit, as Ashe ensures that his cast and crew share a very similar vision for his romantic historical tale as he does, which adds up to the kind of romance that can be easily enjoyed by just about anyone.

That being said, the film falters somewhat in some of its pacing. It takes a little while for our two romantic leads to truly hit it off, and even later on there are potential obstacles – from Sylvie’s domineering mother to a sultry French countess that appears to have her eyes on Robert and his band – which don’t end up making enough of an impact to really justify why they’re even there to begin with. A couple of the plot developments also feel as though they were forced in because, after all, it’s an old-fashioned movie romance with most if not all of the trimmings, so our lovers have to be jeopardised on more than one occasion, even if it doesn’t feel like a natural progression to either the plot or the character development. I’ll admit, for all of the film’s efforts to look and feel as much like a film you’d often find around this particular time period, it felt as though something was also missing in the editing to further replicate one of those movies, which isn’t a big enough stickler to ruin the overall film but could have given it even more of a connection to this long-gone time in history.

Again, though, Sylvie’s Love does manage to overcome some of its flaws by being a well-made, well-acted and reasonably progressive romance which has ties to an old-fashioned narrative while also having enough courage to be its own thing as much as possible. While it’s unlikely the film will be considered a real game-changer when it comes to the tried-and-tested formula for Hollywood romances, it’s at least a highly watchable one to tide us over until the real revolutionaries arrive.

Sylvie’s Love is a handsome and charming romance with its foot firmly in the old-fashioned Hollywood genre template while also being a well-made, well-acted and progressive take on the classic narrative in its own right, even when sometimes its strong ties to the traditional formula prevent it from being a truly unique and revolutionary example that others can look up to.