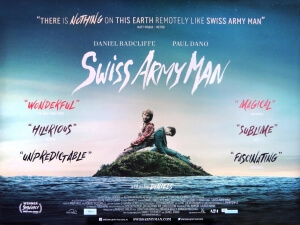 BASICALLY…: Alone on a deserted island, Hank (Dano) comes across a farting corpse he names Manny (Radcliffe), and together they embark on a journey back to civilisation…

There are times when, more than ever, I absolutely love what I do. Granted, reviewing films has always been a great passion of mine, but the things I get to see can sometimes be so bizarre and unlike anything else I can remember seeing, that I feel like a very special individual for seeing something that not many others will probably ever manage to see throughout the rest of their lives.

For example, I watched a film where Daniel Radcliffe plays a farting corpse. Yes, a farting corpse. Not only that, but he can do just about anything from spewing drinking water from his mouth, to chopping large chunks of wood with his bare arms, to using his erection as a compass (because sure). He is the Swiss Army Man of the title of the directional and writing debut of “Daniels”, the combined entity of Daniel Scheinert and Daniel Kwan, and just like his endless amount of abilities, the film never ceases to amaze with its sheer balls-to-the-wall insanity that’s incredibly entertaining and also extremely endearing.

You must be wondering, “how on Earth does this story even unfold?” Well, as it turns out, there is a man that has been stranded on a deserted island named Hank (Paul Dano), and when we meet him he’s about to hang himself after months of somehow being marooned miles away from shore… when, all of a sudden, a Radcliffe-shaped corpse washes up on the beach, and propels Hank back to the shores of civilisation by its sheer, erm, wind-power. From there, Hank and the corpse, nicknamed Manny, travel together through the wilderness on their way back to the world, and when Manny starts to magically communicate (no, not through his bunghole), they start to form an unbreakable bond that only the minds of severely bonkers but somehow smart writers could conjure up.

Make no mistake, Swiss Army Man is probably one of the most original and fresh ideas of the year, and is executed as such by Daniels, resulting in a film that is so unashamed of its own strangeness that it’s almost alluring. It’s also one of the most heartfelt movies about friendship you’ll see all year, because not only is there a genuine well-intentioned sweetness at its core – and again, this is a film where one of the main characters is technically dead all throughout – but the unexpected comradery between Dano and Radcliffe is so strong, as both share great chemistry with each other and each have their own distinct personalities. Dano’s Hank is more or less the straight man in all of this, wanting eagerly to return to society and potentially even muster up the courage to talk to a stranger on the bus that he’s adored from afar, played by Mary Elizabeth Winstead. He’s a guy with good intentions, but has such a warped perspective of the world that’s made him anti-social to anyone that isn’t a corpse that’s been washed up onto the shore. Speaking of whom, Radcliffe has the most difficult role between the two of them, not just delivering lines and pure emotion through stiff body movements (so to speak) but also expressing a childlike innocence of the world that he’s growing more and more interested in with every passing moment. Given that he’s been presented with such a difficult acting job, Radcliffe is truly fantastic here, and who would have thought that one of the most lovable and heart-warming characters of the year would be a farting corpse played by the former Boy Who Lived?

I should clarify that, despite earlier reports, the film is not all just one big fart joke. Sure, there are a lot of them, but there’s a large chunk of the movie where the film literally puts a cork in it, and that time is more spent on developing the relationship between the living and the dead. The creativity that Daniels puts on display to show their bonding sessions, from reconstructing a moving bus using sticks and stuck-together landscape pictures to simulate movement, to constructing a custom-made movie screen where Hank re-enacts shadow puppet versions of Jurassic Park, E.T. and others, is extraordinary, and despite the increasing bizarreness that led to numerous walk-outs at its Sundance premiere, you’re really sucked in to this world and want to see exactly where it’s all leading, because everything is so entertaining. It’s also a fun adventure movie, one that could work well as a double-feature with another great recent wilderness movie, Hunt for the Wilderpeople, and where it does end up going almost doesn’t matter in the end, because you’re having such fun on this strange journey that you don’t really want to see it all come to an end.

I enjoyed the absolute hell out of this movie, because it’s funny, strange, wildly creative, and incredibly heart-warming; some of the best things I can say about a movie of any year. Its frequent bizarreness will definitely put some people off, as it did at Sundance, but I would advise them to at least stick around for ten more minutes after that, erm, explosive opening sequence, because I think they’ll find that once they look past the incessant farting from a corpse played by Daniel Radcliffe, they’ll see a film that has a sweet emotional core at its centre, one that will have them either rolling their eyes or rolling in the aisles right up until the very last shot.

Not only is Swiss Army Man one of the most unique films of the year, it’s one of the best.

Swiss Army Man is one of the most original and endearing films you’ll see all year, one that isn’t afraid to bask in its bizarreness but also tell a rather heart-warming tale of friendship and farting corpses. Absolutely go and see it if you can.