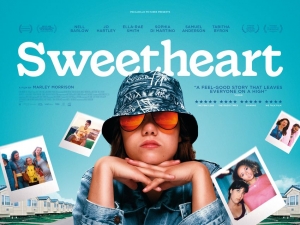 BASICALLY…: During a family trip to a coastal holiday park, an anti-social teen (Barlow) becomes infatuated with a local lifeguard (Smith)…

When Cliff Richard sang about going on a summer holiday, it’s unlikely that he intended to spend it at a dull coastal holiday park, where the only thing lamer than the resident magician is the lack of Wi-Fi in the camper vans. It’s one of the many amusing things about writer-director Marley Morrison’s debut feature Sweetheart, which far too accurately gets across how naff places like these can be for anyone over the age of ten, all from the perspective of a character who really wants to be anywhere else in the world.

This character is AJ (Nell Barlow), a moody seventeen-year-old who permanently sports a bucket hat, blood-orange sunglasses, and a horrific amateur bowl cut as part of her many attempts to defy traditional feminine attire, all of which probably have something to do with the fact that she is also openly gay. Regardless of her sexual orientation, she is (in her opinion) being dragged along against her will to a holiday park in Dorset for the week by her mother Tina (Jo Hartley), who wants to spend some time with her family including AJ’s pregnant older sister Lucy (Sophia Di Martino, most recently seen in Loki), and her eight-year-old sister Dayna (Tabitha Byron). Initially, AJ makes little attempt to engage with family activities out of spite for her even being here, but when she meets the park’s pretty lifeguard Isla (Ella-Rae Smith) AJ begins to open herself up in ways she might not have expected.

Marley Morrison walks a wobbly tightrope by introducing up to a protagonist who is, in most aspects, kind of a terror. Beyond simply being wildly self-absorbed, AJ is the kind of moody, anti-social teen that Harry Enfield once satirised with Kevin the Teenager, to a point where her overall appearance and attitude is almost like a splitting image of the Enfield stereotype. She’s constantly whining, stroppy, and annoyed with being asked to do the simplest of tasks by her well-meaning but ultimately clueless family, especially when it comes to her gender non-conforming identity (her mother scolds her for not dressing more like a girl, stating that even lesbians make an effort to look attractive). However, it is a testament to both Morrison’s dryly witty writing and Nell Barlow’s grounded lead performance that this character, despite her many insufferable moments, still manages to come off as endearing to the viewer. She is given her own internal monologue by Morrison, which delivers some amusingly curt lines which feel very natural as to what a teen like this might be thinking in the moment, while Barlow is able to find the awkward humanity in the young character’s naivety in scenes where the actress is required to say everything with just her facial expressions.

She serves as a formidable protagonist for this sweet coming-of-age movie, which Morrison directs with clear experience of going through similar notions, whether it’s dealing with her own adolescent queerness or having to endure so much cheesiness at one of these holiday parks. Sweetheart certainly operates under a familiar story structure, particularly that of the young lead finding love and gaining useful life experience during a summer, but it works well enough within its confinements to make the narrative its own without necessarily going through all of the expected tropes. You do feel a connection between the two main love interests, since they share a nice chemistry with each other, and you also sympathise with the supporting characters as they deal with their own insecurities; Jo Hartley does particularly well as the doting mother, while Sophia Di Martino has fun flouting her character’s high-maintenance prissiness (which is, needless to say, literal dimensions away from Sylvie). Overall, Sweetheart is, well, sweet by nature and packed with a decent amount of heart.

Minor criticisms are exactly that – the film’s ending feels a bit stretched out, offering many natural places to fade out only to keep on going for another few minutes, while a couple members of the supporting cast do feel side-lined most of the time – and they don’t distract from how formidable the writing, direction, acting and editing all are to make this independent British flick a neat little spot of joy in these dark times. It’s the kind of movie you can watch with a big grin across your face, because there’s plenty to enjoy without anything going too overboard with the themes and overall messages.

Of course, though, nothing will ever explain how the makers of Sweetheart were able to so accurately portray the eye-rolling naff-ness of a British holiday park. Having been on many such holidays in the past, I can personally confirm that they are as cringeworthy as they’re made out to be here, and since so many families this summer will have undoubtedly been to them in the absence of overseas trips, maybe there will indeed be a fresh audience for this film that can also attest to how naff they really are.

Sweetheart is a nice coming-of-age story which works well within the familiar structure, offering a unique perspective that’s made less intolerable by strong writing and direction by Marley Morrison and lead actress Nell Barlow, and an amusing look at the naff-ness of British holiday parks.

Sweetheart will be released in cinemas nationwide on Friday 24th September 2021 – click here to find a screening near you!