Sweat (Review) – An Intimate Look At The Lonely Influencer Lifestyle 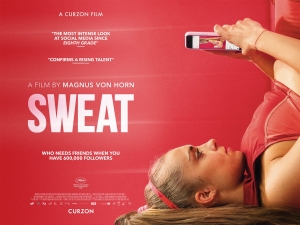 BASICALLY…: A social media celebrity (Kolesnik) searches for true intimacy while struggling with her public persona…

Social media has allowed people around the world to project a seemingly perfect public image for themselves, and some have even become famous for doing so – but what about the much more vulnerable and far from perfect realities that they are choosing to hide from everyone? In Sweat, the Polish-language feature from Swedish director Magnus von Horn, the line between public exposure and private insecurity is blurred by an intimate study of what it means to have it all, but also very little at the same time.

The film follows Sylwie (a tremendous Magdalena Kolesnik), who has gained a significant online following thanks to her viral fitness regimes. She has plenty of fans, a sleek apartment, numerous sponsorship deals, and regularly posts on her Instagram feed for her 600,000 followers. However, when the cameras are down, we see that Sylwie actually leads a very isolated existence; she finds herself unable to connect with most people, with even her family not exactly giving her the assurance that she desperately needs, and thus she is often left feeling very alone. What’s more, she has a stalker who sits quietly in his car parked outside her apartment building, and who begins pleasuring himself when she tries to confront him.

Instead of being either a full-on condemnation of the online influencer lifestyle or a vapid celebration of it, Sweat exists as more of an observational window for the viewer to make their own decisions about the life that Sylwie leads. It shows a number of key moments in both her public and private lives, all of which director Magnus von Horn carefully constructs using delicate camerawork and editing to replicate an itching feeling of anxiety. Scenes of Sylwie performing fitness routines in the middle of a mall, or even working out herself at the gym, are coupled with intentionally disorientating cinematography that leaves you exhausted just from watching all of the intense facial close-ups, but in a way that makes it feel somewhat artificial, like it’s been specifically designed to work the muscles without much of the humanity. Parallel to this, when we see her private life, it’s almost eerie how quiet and disconnected everything is, with much more static shots captured from further away, adding even more to the ultimate emptiness of her actual existence. Even scenes that should be more wholesome, like a family meal to celebrate her mother’s birthday, are instead suffocated by a rather cold tone as, once again, things seem chillingly artificial even though there are no cameras recording anything.

There is no intention on von Horn’s part to be in any way revelatory about the way it depicts online stardom, but instead he uses his platform to simply show that despite the millions of followers or the lucrative sponsorship deals, people like Sylwie who throw so much of themselves into the public eye are potentially more at risk of being emotionally vulnerable than those who might not be so inviting. Even literal cries for help, when Sylwie starts posting videos describing her loneliness, are met with both even more public adoration, and complaints from sponsors who feel that her emotional venting does not match the image they initially signed up with. Sweat draws an interesting conversation point regarding how much one should share when they have thousands upon thousands of people to cater to, but again the film carefully allows the viewer to come up with their own answer rather than spoon-feed it to them, and in doing so it makes the film feel more humane and compassionate than other films which depict people like Sylwie as the most vapid and narcissistic caricatures in modern society.

There have been numerous occasions where YouTube personalities, Instagram influencers and Facebook users have taken to their respective platforms to highlight the vast differences between what they may post and what they choose to hold back, in a stark reminder to the world that not everything people post is necessarily a reflection of who they truly are. What Sweat does rather well is to dramatize that in a way that makes it feel like a very human struggle, instead of something that should be easily dismissed by the masses, and it shows that even the trendiest of folk are not immune to severe mental health when feelings of loneliness wash over them. It’s a thoughtful and intimate film which has a number of interesting things to say, and it manages to get a number of its points across without a sweat.

Sweat is an intimate and thought-provoking drama about the stark parallels between a very public persona and a much lonelier private one, which neither condemns nor satirises the online influencer lifestyle but rather allows the viewer to watch and make up their own minds about it, while also retaining a sizeable compassion for its lead character, portrayed wonderfully by actress Magdalena Kolesnik.

Sweat is now showing in cinemas nationwide, and is also available to rent on Curzon Home Cinema.