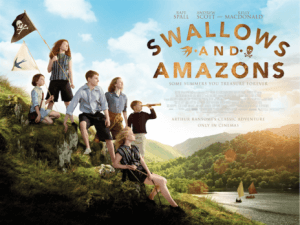 BASICALLY…: Whilst on holiday in the Lake District, the Walker children become embroiled in a battle for the ownership of a small, secluded island…

The first in a series of children’s books by Arthur Ransome, Swallows and Amazons is perhaps remembered best by doting grandmothers and middle-aged people who studied it for their O-Levels. As for younger generations, it is sadly lost amongst the Harry Potters and the Twilights of this day and age, meaning that fewer and fewer children are getting to experience a story where children could – gasp! – go outside and actually do things, instead of just staying inside with their faces glued to screens.

Hopefully, this new adaptation – directed by Philippa Lowthorpe, making her feature debut after helming several TV movies and episodes of Call the Midwife and Jamaica Inn, and written for the screen by Andrea Gibb, of Dear Frankie and Nina’s Heavenly Delights recognition – will change all of that.

Lowthorpe and Gibb move the action up to the summer of 1935, as opposed to 1929 in the novel, when the Walker family head up to the Lake District for a short getaway. After becoming curious about the uninhabited island in the middle of the giant lake, the four children – John (Dane Hughes), Susan (Orla Hill), Tatty (Teddie-Rose Malleson-Allen) and Roger (Bobby McCulloch) – persuade their mother (Kelly Macdonald) to let them take a small sailboat named “Swallow” out to the island for a camping trip. However, their little adventure lands them in the middle of a land dispute with a pair of tomboy sisters Nancy and Peggy Blackett (Seren Hawkes and Hannah Jayne Thorp), who call themselves the “Amazons” and claim to already own the island that the Walkers have declared their own. On top of all that, the Walkers have constant run-ins with the mysterious and seemingly unfriendly Jim Turner (Rafe Spall), who himself is being targeted by a pair of Russian spies (one played by Andrew Scott) who seem to believe that he is involved with some international espionage.

This latter part of the story is a new addition not present in the original novel, and was included to apparently not just amp up the tension, but also draws from Ransome’s own experiences as a spy in Russia during the First World War. A noble gesture, even a clever one, but when it’s in a film meant more for kids than adults, it can potentially throw off its target audience when characters start talking about military weapons and nuclear bombs – after all, what child under the age of at least 8 would be interested in international espionage, unless it involves gadgets and explosions and all that cool stuff that kids tend to like? Despite that, it’s a decent addition that will definitely appeal more to adults, and you can understand Lowthorpe and Gibb’s desire to incorporate elements of real life excitement into this otherwise harmless children’s adventure, as well as a few other changes here and there (Tatty, for instance, was originally named Titty, and was altered for the very reason why you are snickering right now).

“Harmless” best describes Swallows and Amazons as a whole; it’s neither offensive, nor is it completely bland or forgettable. It is admittedly nice to see a film about children just having fun and going on a little adventure, getting to do lots of outdoorsy stuff like pitching a tent, starting a fire, sailing on a boat, and just be children. The young actors they got to play these parts are fine as well, many of them acting for the first time in a feature film, and there are scenes where they get on so well you’d swear they were actually related in real life. The story, light though it may be, is accessible enough to entice children of most ages, while adults can respect it as a mellow and passable adaptation, and even though we said the added sub-plot can potentially go over kids’ heads, it’s still enjoyable and tense to enjoy as an adult (after all, we never said it was bad). As an alternative late summer movie, it’s completely serviceable, and Lowthorpe and Gibb have done the original story proud.

And once again, if the release of this film does get children to read these books again, or even any kind of book at all, it will have been worth it – just so long as it distracts them from seeing Nine Lives (look for a review for it very soon, but from what we’ve read about it… oh dear God.)

Swallows and Amazons is a sweet and harmless adaptation of the classic children’s novel, which features some encouraging outdoors activities to entertain the children, and a newly-added espionage sub-plot that adults can enjoy as a nice compliment to the real-life escapades of author Arthur Ransome.