Surviving Christmas With The Relatives (Review)

Surviving Christmas With The Relatives (Review) 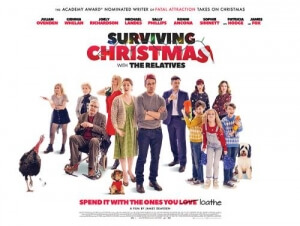 BASICALLY…: A family spends a nightmarish Christmas together at a dilapidated country house…

Every year now, there seems to be at least one movie released around Christmas that’s about one big dysfunctional family coming together for the holiday season, only for everything that can go wrong to indeed go wrong, with all these egos at war with each other and turning the festivities into a cataclysmic display of awkwardness and petty arguments. Sure, there are definitely family squabbles to be had around this time of year, but the fact that there now seems to be a whole subgenre of Christmas movies where the family or families all hate each other’s guts is kind of a ridiculous concept to behold.

But not as ridiculous as the fact that Surviving Christmas With The Relatives – which is an awkward title to say, not least because it reminds you of another bad Christmas movie that shares the first two words and starred Ben Affleck as a crazy person – is probably the worst out of the lot yet. Watching this movie is an utterly miserable experience, kind of like if you spent Christmas with that one family member who you never see during the year but then remember why that is when they’re over, because they’re so obnoxiously unappealing, aggressively unfunny, and an overall pain to be around.

We are (un)fortunate to spend this particular Christmas with an upper-middle-class family somewhere in the English countryside, where couple Dan (Julian Ovenden, who looks so much like an English James Franco it was honestly distracting), Miranda (Gemma Whelan, who I guess was subject to this kind of torture when she was kidnapped in the recent series of Game of Thrones; save her from this madness, Theon!), and their young kids are living in Miranda’s late parents’ manor as they plan to fix it up as a B&B. Why they picked this place to host Christmas, seeing how it’s still pretty rundown with unpainted walls, no internet connection, and Polish builders wandering freely about the place, is an ill-conceived notion that is soon dwarfed by the arrival of Gemma’s sister, the monstrously vain actress Lyla (Joely Richardson), and her obnoxious American family including her utter tool of a husband Trent (Michael Landes), who all proceed to make everything even more unbearable to stomach, from the passive aggressive put-downs from successful sister to not-as-successful sister, to being utter nightmares to everyone around them. There’s also an elderly aunt and uncle – the latter played by a criminally underused James Fox who’s slumming it in a wheelchair – as well as Dan’s weed-addicted son from a previous marriage, a Chinese foreign exchange student, and a whole bunch of other people you don’t care the slightest about because you hate nearly every single one of them.

Rarely have I seen a Christmas movie so devoid of joy and hope, so utterly lifeless, and without any sense of genuine goodwill around this time of year, that it honestly leaves me utterly confounded. Not a single joke in this comedy works, because it’s either all a bunch of old Christmas hijinks shamelessly rehashed to zero effect – the turkey’s too big to fit in the oven! The vicar’s tipsy from all the booze again! And other “greatest” hits – or groan-worthy gags that wouldn’t fly in any comedy regardless of the time of year. This is the kind of movie where a dog begins humping peoples’ legs because it ate a dropped Viagra pill, and where young children accidentally spy their old auntie using a vibrator; that’s the kind of humour this movie is going for, and if you rolled your eyes at either of those examples, then congratulations, you are human. What’s even weirder is that there are multiple set-ups for jokes sprinkled throughout, but they are either never revisited or they have one hell of a weak punchline; a running gag about a leaking ceiling ends exactly as you’d think it would end, and even that awful Viagra joke only comes back into play several scenes later, when you’ve actually forgotten that it happened. It’s as though whoever wrote this movie was actively trying to sabotage it with horrible writing, which is saying something because the guy who did write and direct this movie was – as if this movie couldn’t get any more depressing – James Dearden, the Oscar-nominated writer of Fatal Attraction; that’s like finding out that Taylor Sheridan, the writer behind Sicario and Hell or High Water, also wrote Christmas with the Kranks (which, obviously, he didn’t, but I think you get my point)!

As bad as the jokes are on paper, it would be another thing if it were executed well, and this movie can’t even do that right; this looks like it was quickly shot in a weekend when all these actors just happened to be available, many of whom are just kind of slumming it in performances where they really couldn’t be giving a stuff(ing). Scenes will just go by all at once with no sense of direction, and you don’t even have the luxury of caring about any of it because these characters are so detestable and humour so non-existent. On top of that, it lazily uses a soundtrack full of typical Christmas tunes which often don’t fit the tone of the scene but are only playing because, well, it’s Christmas; there’ll be a scene of nothing even remotely interesting happening, but it’s set to the jovial tune of the Russian Dance segment from The Nutcracker Suite because, again, it’s a Christmas movie and it’s a piece of music that has to be in every Christmas comedy ever, apparently.

It’s horribly made, it’s horribly written, it’s not even that well-acted; if you want to see a Christmas movie to get you primed and ready for the next month, I guarantee that you will definitely not survive this dreck.

Surviving Christmas With The Relatives is a painfully unfunny and overall miserable experience with hateful characters, zero jokes that work, and poor production values that look vastly cheap and unambitious. It’s a great big lump of coal.