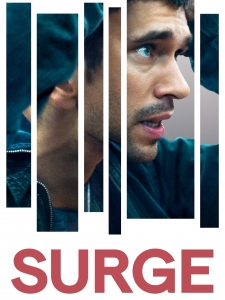 BASICALLY…: A disgruntled city employee (Whishaw) embarks on a journey across London after committing an impulsive act…

For his debut feature Surge, having previously made a collection of award-winning shorts including The Long Goodbye with Riz Ahmed, director Aneil Kaira arrives on the scene with a taut, intense and anxiety-driven pressure cooker of a thriller that calls to mind the recent works of Benny and Josh Safdie, but the filmmaker has enough of his own artistic merits to prevent his film from being a complete carbon copy of something like Good Time or Uncut Gems.

In the film, Ben Whishaw stars as Joseph, a quiet and withdrawn man working a job in airport security. His day comprises of the same familiar routine from patting down passengers, to silently commuting home for a cheap microwave meal, and occasionally visits his emotionally distant parents (Ellie Haddington and Ian Gelder), who unconsciously use every available opportunity to criticise or express disappointment in their own son. It’s during one of these visits that Joseph cuts his mouth open with a shattered glass, a painful but minor event which very quickly sparks a long-overdue nervous breakdown; he acts out in front of his superiors on the job, bombards a sick colleague (Jasmine Jobson) at her flat, and – in a completely impulsive decision after a cash machine swallows his card – starts robbing banks just for the thrill of it. All of this and more, from checking into and completely destroying a hotel room to crashing a fancy wedding, gives Joseph the satisfaction that he’s been craving for his entire life, until things inevitably come to a head.

To capture the sheer intensity and wild, chaotic nature of his protagonist’s odyssey, Kaira has his cameramen follow Whishaw’s Joseph around London as he wanders from one scenario to another, resulting in a number of shaky hand-held shots that create the illusion that we are running alongside him at all times. It’s a stylistic choice that’s difficult to perfect, because too much of it can leave viewers disorientated and even nauseous, but there is such a real sense of urgency in how Kaira pulls it off that he manages to incorporate feelings of severe anxiety into the sporadic camera work, and as with the Safdies’ Uncut Gems it really makes you feel as though you’re having a long-term panic attack. The filmmaker impressively utilises seamless editing and quick-witted cinematography to give off the impression that we, like Joseph, are experiencing a meltdown in real-time, and it can make Surge often harsh and unforgiving to watch but also, in its own unique way, euphoric in the sheer spontaneity of its unfolding plot.

Key to this concept and execution working as well as it does is Ben Whishaw, whose central performance in this movie can be best summarised with a midway scene where, during his complete destruction of a fancy hotel bedroom, he cuts open the mattress and crawls inside of it in a cocoon-like manner. On paper, that probably sounds ridiculous, but watching it unfold on the screen is downright performance art; Whishaw really captures the unhinged and manic essence of his anti-hero, but also manages to earn sympathy for his plight even when he’s doing very unlawful things throughout. He nails each one of his character’s nervous tics and his wild, uncontrollable energy as he becomes more and more detached from reality, as well as any and all social norms during moments when it’s clear as day that he no longer cares what the world thinks about him. It’s one of Whishaw’s very best performances, and easily one of the most committed and fully-immersive turns I’ve seen so far this year.

If any of the flaws in Surge do have to make themselves known, perhaps more could have been shown to explain the main character’s rapid descent into chaos. What we get is just enough, from the stressful run-ins with oddball passengers at the airport, to some hurtful mannerisms from his own parents, but even in those calmer early scenes it’s clear that Joseph has some serious underlying mental health issues which aren’t ever addressed, so to have gone into a bit more detail about what’s going on in that head of his might have made some difference when it comes to further understanding his later breakdown.

However, Surge has enough strengths to outweigh the few negatives, and serve as a very impressive calling-card for the debut filmmaker, who seems to very much be on his way to delivering even greater, more intense character pieces in the future. The same goes for Ben Whishaw who, if his gig as Q doesn’t pan out beyond the upcoming No Time to Die, has the potential to be a highly transformative performer who can deliver some truly chameleonic turns such as this one.

Surge is a very well-executed pressure cooker of a thriller that serves as an impressive calling card for debut feature filmmaker Aneil Karia, who invokes the spirit of Benny and Josh Safdie with chaotic camera work and high-strung editing, and a transformative as well as career-best lead turn by Ben Whishaw.

Surge is now showing in cinemas nationwide – click here to find a screening near you!