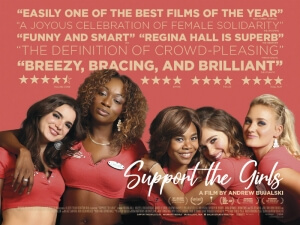 BASICALLY…: Lisa (Hall), the manager of a small breastaurant, finds her patience and loyalty tested over the course of a single day…

“Clerks with curves” is probably how your average hick would probably describe writer-director Andrew Bujalski’s Support The Girls, but the film deserves a whole lot more respect than just that simple description.

It is a workplace comedy with a unique and refreshing female perspective, one that handles themes of depression and feminine strife in mature and even surprising ways, and also houses one hell of a perfect performance by underrated actress Regina Hall – so if you have enough restraint to look beyond the scantily-dressed ladies, you’ll find something much richer beneath the surface.

Hall plays Lisa, the manager of a Hooters-esque sports bar and restaurant called Double Whammies, and the film mostly follows her throughout the course of a single day. It doesn’t start off great as she’s seen crying in her car for reasons that aren’t entirely divulged, but we soon see her fulfilling her duties as the designated mother hen to her female staff, including the eternally chirpy Maci (Haley Lu Richardson) and single mother Danyelle (Shayna McHayle, better known as rapper Junglepussy), who all clearly adore Lisa even if their actual job leaves less of an impression. The day is quite eventful, from a would-be burglar getting caught in the air ducts, to intense road rage incidents with Lisa’s incompetent boss Cubby (James LeGros), to an off-the-books car wash so the staff can raise money for a fellow employee who’s being abused by her boyfriend, to the cable going out hours before a big boxing match. During all of this, Lisa does her very best to keep her head above water, but as we learn a bit more about what her personal life is like it starts to become a little more clear that this woman is just about ready to have a bit of a nervous breakdown.

Does she go completely off the rails by the end? That’s not for me to say, but regardless of whether she does or not, the film does such a good job at slowly reeling you in to the underlying drama at its heart that either outcome would feel completely earned, and most of all relatable. As you see all of these problems for the main character piling on top of one another, you think to yourself how anyone could cope underneath all of that pressure, and the honest answer is that she barely is; the combination of her increasingly busy professional life as well as her heartbreaking personal one is clearly having a negative effect on her mental well-being, but she still strives to put on a brave face for the sake of her employees who look up to her in the highest regard. Because of that, I feel that anyone who has ever worked in the hospitality industry will very much relate to this film, whatever their gender or creed; as someone who worked in a restaurant for a few months, I relate all too well to the constant pressure from intimidating bosses, the rudeness of certain customers, and most of all the overwhelming feelings of depression that I tried so hard to mask under the alluring smile and bubbly attitudes. I have no idea if Bujalski had worked in a restaurant or similar hospitality vocation, but with his slice-of-life script and naturalistic direction he has definitely nailed the resounding feeling of defeat that clouds over any employee in that sector.

The appeal of this film is kind of like a “breastaurant” similar to Hooters as well as the one in this film; you come for the pretty, smiling and scantily-dressed ladies, but you stay for the overall atmosphere as well as the sweet, tender nibbles on the menu. The “nibbles” in question are not just the hard-hitting themes that were talked about in the previous paragraph, but also the fun and three-dimensional characters that you get to spend some time with during the course of the film; Regina Hall, as hinted at earlier, is undoubtedly the film’s MVP with the actress delivering a note-perfect portrayal of someone on the end of their tether and trying to not lose their cool in spite of every bad thing happening to her, although Haley Lu Richardson is its secret weapon as the eternally chirpy and enthusiastic Maci, whose genuine smile and good-natured attitude is more alluring than even the tight shirt and short-shorts she and her co-workers wear as uniforms. Both of them, as well as other members of the ensemble cast, feel like well-rounded people with their own quirks and flaws which feel real enough to develop a genuine interest in, and their performances are so impressive and enjoyable that you have no problem believing that these characters can exist in real life, but because they don’t you’ll have to settle for finding them extremely likeable and relatable instead.

Some will probably find this movie a little too slight for their tastes – there is already a stark difference between the 92% critics’ rating on Rotten Tomatoes and the noticeably lower 66% audience rating, which goes to show that the film’s occasionally abrupt pacing probably isn’t suited to everyone’s tastes – but as a slice-of-life movie this is a rather enjoyable outing, one that’s got a nice big heart to it as it gently guides you through its depictions of some rather heavy themes, and feels real enough to a point to where you wish some of these characters actually existed so you could listen to what they have to say in person.

So yes, it’s definitely more than just “Clerks with curves”.

Support The Girls is a fun slice-of-life movie that isn’t afraid to tackle heavy themes of workplace depression and feminine strife, but it stays afloat thanks to its refreshing perspective on said themes as well as some very strong performances from a never-better Regina Hall and a scene-stealing Haley Lu Richardson.

Check out Support The Girls showtimes in London
on Walloh.