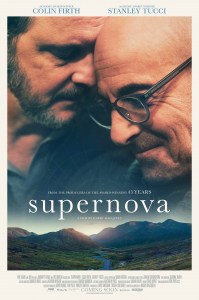 BASICALLY…: Long-time partners Sam and Tusker (Firth and Tucci) travel across the country before Tusker further succumbs to early-onset dementia…

This review is of the cut shown at the BFI London Film Festival in October 2020 – the UK release date is currently listed for November 20th 2020.

Opening on a shot of an increasingly starry sky, which transitions into a close-up of two hands gently caressing each other, then transitioning into our main lovers in all their covered-up glory, Harry Macqueen’s Supernova wastes no time establishing that it is about love in all of its purest forms. The actor-turned-director’s sophomore film – following his 2014 debut Hinterland – continues to be just as heartfelt from those moments onwards, and will more than likely leave you with more than just a lump in your throat by the end, for it is an exceptionally emotional watch with two lead performances that are guaranteed to make even the toughest person in the audience bawl their eyes out.

Colin Firth and Stanley Tucci play our main couple, Sam and Tusker respectively, who have been together for twenty years and are still going strong, even after Tusker has been diagnosed with early-onset dementia. We meet them as they set off in their camper van on a trip across England’s vast countryside, where they take in the several beauties that the landscapes have to offer, from the gorgeous lakes to the peaceful mountainsides, and find time to stop off at Sam’s sister’s house for a few nights’ stay with extended family. However, with Tusker’s mental state clearly beginning to deteriorate with every passing hour, the two of them are faced with the devastating reality that very soon, Tusker will no longer be able to stay the person he was, let alone recognise Sam’s face, which leads to a heart-breaking decision that no couple in the world could ever imagine coming to.

The way that Macqueen plays out his tale of love and mortality is gently muted, refusing to cave in to saccharine melodrama or overplayed moments of comedy, instead letting each and every conversation and situation play out naturally. When Sam and Tusker bicker over small things like the sat-nav or whether they’re allowed to park up on certain natural spots, it’s very much like a couple who’ve been together for a long time and are comfortable enough in their relationship to offer their points of view without it descending into full-blown argument. The same goes for any comedic moment that in any other movie would have been played up for laughs until that’s all the scene becomes; when Firth’s Sam falls out of bed while the two of them are sleeping in his childhood bedroom, the moment is certainly funny but not blown out of proportion, and again feels like another perfectly natural thing to have occurred in the lives of these two characters. The universality of the characters’ love for each other and the mundane things they experience along the way is gorgeous, with zero sign of prejudice or compromise for certain audiences; this is a love story through and through, and a beautifully portrayed one at that.

Macqueen’s soft touch throughout is exquisite, especially later in the movie when Sam and Tusker – the former especially – are forced to deal with the inevitable fact that Tusker is indeed not going to be himself for much longer, and the decisions that are being made to settle the issue once and for all. In these moments of high drama, writer-director Macqueen places the focus firmly on the characters and their sound arguments for the choices they are making, without resorting to overplayed theatrics or insincere clichés (plates are destroyed, but it’s off-screen and you don’t even hear them smashing). A major part of what makes these scenes so emotionally devastating is how fantastic both Colin Firth and Stanley Tucci are in this film; the two actors are apparently very good friends in real life, which you can tell through their easy chemistry and their ability to both laugh and live together, from simple scenes where they’re simply laying in bed together to more emotionally complex moments which are layered all throughout the third act. Firth has never been so devastating to watch in a movie, and neither has Tucci as you can see the inner torment clouding his already crumbling mind, while with Firth you can feel his vulnerable fear of slowly losing the person most important to him bubbling under his very British mannerisms.

By the time it finally reaches its emotionally satisfying conclusion – complete with a beautiful rendition of Elgar’s Salut d’Amour by Firth (the character is a professional pianist) – you feel as though you’ve gone through a ringer of emotions that would even leave the personified ones from Inside Out exhausted, and both Firth and Tucci play a huge role in guiding you to that point with a pair of devastating, absolutely beautiful performances that deserve to be remembered in the coming months. Macqueen’s film is just as wondrous to experience, a true exploration of love in all its complexity, and does not hold back on its powerhouse drama which, once again, is fantastically understated and far more effective than any other film which would ramp things up far higher than they ever needed to be. It is an exceptional film for anyone who has ever experienced love, but be prepared to come out of it with a stream of tears crawling down your face.

Supernova is a beautiful exploration of love and mortality from writer-director Harry Macqueen, who dials down the overblown melodrama in favour of something far more natural which turns out to be extremely effective, as are the two absolutely fantastic turns by Colin Firth and Stanley Tucci, neither of whom have been more devastatingly emotional to watch.