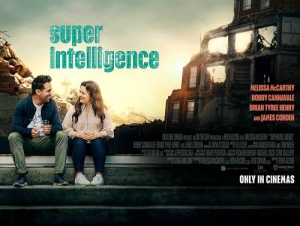 BASICALLY…: A normal woman (McCarthy) is observed by a powerful superintelligence (Corden) who will determine whether or not to destroy the world…

Melissa McCarthy and her husband Ben Falcone’s history of directing, writing and starring in their own features has had a… spotty relationship, to say the least. Their first three features Tammy, The Boss and Life of the Party all underperformed with critics and audiences, many of them citing their poor direction, unfunny writing, and most of all their complete waste of McCarthy’s genuinely strong comedic skills, seen in much better films like Bridesmaids and Spy.

However, when it comes to their fourth film Superintelligence – which debuted on HBO Max in the States, but is getting a theatrical release here in the UK – you need to go in with those low expectations, because I guarantee you will be mildly surprised by this one. To clarify, Superintelligence isn’t a particularly good movie, but compared to McCarthy and Falcone’s previous movies together, it might as well be their Citizen Kane.

In the film, McCarthy plays Carol Peters, a good-natured yet entirely average woman who, one morning, is shocked to find her electrical household items are talking to her. As it turns out, they’re being operated by a powerful “superintelligence” which can control any technological device it wants, and even more alarmingly has just gained sentience. Carol, it seems, has been selected by the superintelligence – which adopts the voice of James Corden as a means to sound more soothing to her – to be observed as a means to decide whether it should destroy humanity or not, and if mankind is truly worth preserving. When it discovers that Carol still harbours feelings for her ex George (Bobby Cannavale), who’s about to move to Dublin for a year to teach, the superintelligence plays matchmaker in the short amount of time they have left, in the ultimate test of humanity’s capability of love and compassion.

The core problem with Superintelligence, just like all of director Ben Falcone’s previous films, is that it’s just not funny. A lot of the jokes and one-liners receive a dry reception, stemming from their awkward deliveries and unnecessary rambling that makes scenes far longer than they ever needed to be. For all of his background in comedy, Falcone does not seem to be capable of making anything or anyone, even his real-life wife McCarthy, bring a single solitary laugh to the table, which is mind-boggling when you look at the embarrassment of riches he sits upon from his very comedically gifted partner to a concept that does have a lot of promise to it.

That being said, Superintelligence might also be Falcone’s best film to date, which isn’t saying much because it’s is still not good, but it’s a fact nonetheless due to how, unlike his and McCarthy’s previous three outings together, this movie actually has a sense of focus. It does have a solid plot that it follows from point A to point B, still getting distracted along the way with needless detours but significantly less than in, say, Life of the Party which was almost entirely made up of needless detours. It has characters who aren’t complete cut-outs or thinly veiled representations of their real-life personas (apart from James Corden, whose very presence in the movie you could argue is supposed to be exactly that), and who are actually given enough space – or perhaps too much – to actually be people instead of contributing to the rambling comedy aspect. For instance, you really buy the relationship between McCarthy and Bobby Cannavale, because they have a genuinely strong chemistry that’s boosted by the actors’ natural likeability, which the film actually hones in on instead of making every single scene of theirs a pointless comedic showcase (though again, that’s not to say the film is completely devoid of that).

I put a lot of these things down to the simple fact that neither Falcone nor McCarthy wrote the film, which they had done for their previous movies and might explain why they didn’t do so well. The script here is solely credited to Steve Mallory, who had previously co-written The Boss with the two of them and has even appeared in their other movies as minor characters, and almost right away you can tell that it was one where they had very little creative input and simply let Mallory come up with a story and characters that actually feel like they belong in a film. It’s a script that still has fundamental problems, including the superintelligence being written as something which can do just about anything from make somebody rich or organise exact dinner schedules (which makes it more of a wish fulfilment movie than a truly sci-fi tale), but I guarantee that it would have been a lot messier and less focused if Falcone and McCarthy were able to get their hands on it and “improve” it with overlong slapstick and implausible ad-libbing.

It’s not a film that I would really recommend, because it really isn’t funny and it wastes a lot of comedically gifted actors on material that gives them little to work with, but it is a much tighter movie than all of Falcone’s previous films put together, which you’d be pleasantly surprised in how that makes all the difference. You don’t have to be a superintelligence to figure out why exactly.

Superintelligence is a much more focused, plot-driven and character-based film from director Ben Falcone and star Melissa McCarthy, which makes it not nearly as insufferable as their previous collaborations, but it still suffers from an alarming lack of laughs that wastes a comedically talented cast and a promising premise on a mediocre, but significantly easier to digest, script.

Superintelligence is out in cinemas across the UK on Friday 11th December 2020.