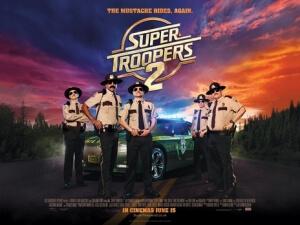 BASICALLY…: A team of incompetent state troopers are recruited to set up a new Highway Patrol station along the US-Canadian border…

The 2001 comedy Super Troopers, which received decidedly mixed reviews and even less stellar box office – and upon viewing it recently, I found it to be a pretty lacklustre comedy with one or two amusing moments here and there but not much else to it – would have faded into obscurity, if it weren’t for the cult following it eventually gathered over the years, mostly from teen potheads who found the aloof and basic humour far more riotous than anyone did at the time.

In fact, it’s because of this following that a sequel actually exists; the Broken Lizard troupe, who had been talking about a follow-up for years but never quite had the financing for it until now, began an Indiegogo campaign asking fans for a $2 million contribution towards production costs, and within 48 hours they had not only reached their goal but were receiving donations left and right, and soon the campaign ended with over $4 million raised and a sequel to Super Troopers finally, after so many years, guaranteed.

With that in mind, it doesn’t really matter what I think about Super Troopers 2, as that crowdfunding campaign alone proves that there is indeed an audience for these films, and while I am not really part of that audience, I can respect anyone who is and goes to this movie with high hopes (in more ways than one, presumably) that they’ll enjoy this one as they did the first movie, regardless of my opinion on it.

That opinion being, much like the first one, it’s a pretty lame comedy with a few amusing moments, but not enough to recommend to anyone who’s not as big a fan of the first film.

It picks up some years after where we left off, with the group of useless Highway Patrol state troopers (largely formed of Broken Lizard performers Jay Chandrasekhar, Paul Soter, Steve Lemme, Erik Stolhanske and Kevin Heffernan) now working menial jobs, having been fired for an incident involving actor Fred Savage. They are soon called back into action by their former Captain (Brian Cox) to help set up a new Highway Patrol station in an area of land once thought to be part of Canada but is actually part of the United States. Naturally, things don’t go very well for them as they butt heads with ruthless Canadian Mounties and other exaggerated Canadian stereotypes, this being the kind of dumb comedy that it is.

Like the first film, plot is secondary to a series of wild antics the officers find themselves in, whether it’s taunting their Canadian counterparts, dealing with a bear that’s been set loose in their station, or in the case of the film’s most obnoxious and detestable character Farva (Heffernan, whose role was much smaller in the previous film but is mercilessly expanded into a leading player here for our horror) being as loud and crude as he can to pretty much everyone around him, be they male, female, Canadian or an entirely different species. The film is largely comprised of these episodic detours, the majority of them failing to get anything bigger than a slight smirk as a reaction, and barely connecting to each other like the loosest of threads that’s about to snap apart. Most of the jokes are very obvious and predictable, like something you would see in a bottom-of-the-barrel family sitcom or anything that Happy Madison puts out (though I will concede, this movie probably isn’t as mind-numbingly bad as some of those movies). Unless you’re really into this kind of goofy and mindless sense of humour, you’re really not going to be on board with this movie or its dumb approach to comedy, and you’ll likely be far more irritated with it than actually laughing along with it.

I certainly wasn’t laughing that hard at this film, outside of the odd one-liner that actually works within the strange world in which it all takes place, and again like how I felt about the first Super Troopers movie, I was mostly just sitting there waiting for the paper-thin plot to move itself forward and get to at least one amusing moment I could get behind. However, as much as I didn’t care all that much for it, I never found myself outright hating having to sit there and watch it; this was a way easier comedy to sit through than Life of the Party was, because at least with this film there were a couple of light chuckles I got out of it compared to that film’s zero. Having seen the first one, this one was exactly what I thought it was going to be, just a dumb and not very funny comedy sequel that will simply come and go for me, and isn’t really bad enough to give it a spot on the bottom list at the end of the year. I think watching the first Super Troopers before this one really did help to prepare me for what I was in store for, because then at least I was familiar with the kind of humour these movies adopt, whereas if I went in to this pretty much blind I probably would have been a bit more intolerant to it. Either way, I just shrug at both of these movies and move on to whatever’s next in my mad film-centric world.

Again, though, it really doesn’t matter what I or other critics think; if you’re one of the people that really enjoyed the first film and have been waiting years for a sequel, then you’ll probably get a more enjoyable experience than I did – but anyone wanting a good comedy to go out and see, you’d probably be better off letting this one go off with a warning.

Super Troopers 2 will appeal the most to fans of the original cult comedy, but anyone else wanting a decent film to go along and laugh at will likely be let down by this film, which contains far more misses than hits and will more than likely pass by quickly in your memory not long after you see it.