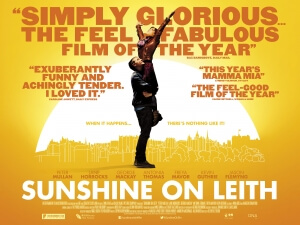 BASICALLY…: Two young soldiers (MacKay and Guthrie) return home to Edinburgh, find love and discover one of their father’s (Mullan) biggest secrets that threatens his marriage – all set to the songs of The Proclaimers…

Dexter Fletcher has now come full circle in his lifelong career in the showbiz world, starting out as Baby Face in Alan Parker’s cheery musical Bugsy Malone and now releasing his second movie as director, which happens to be a cheery musical of his own.

Sunshine on Leith takes its musical cues from the songs of The Proclaimers, fitting their folksy sonnets into an adjustable structure that some may have issues against. Ultimately, though, the simplicity of it all turns the film into an unapologetic crowd-pleaser that thrives on energetic songs and solid performances all round.

Almost every song on the pop twins’ discology is put into sound context, including their signature theme “(I’m Gonna Be) 500 Miles” which inevitably serves as the film’s upbeat closing moments. However, some of the plot seems forcibly wrapped to accommodate certain songs featured in the film. For instance, one character’s ambition to apply for a job in Florida feels like it was only included to cram in the “Letter from America” track. And, like most showstoppers in musicals, they all seem to sporadically come out of nowhere and take us by surprise. One is sprung to life in an Edinburgh pub after a character makes plans to wed his girlfriend, led by an overly-enthusiastic landlord. Another comes in a museum, as led by Jason Flemyng’s curator, where Jane Horrocks’ betrayed wife sings about such betrayal. Despite the sudden nature, it makes no difference to how fun they are to watch and, yes, sing along to. You’ll be humming their hit “It’s Over and Done With” on your way home from the cinema.

When the film focuses on the non-singing parts of the movie, it falters slightly in comparison. For some reason, the overall story takes a turn into soap opera territory with twists and turns that seem a bit contrived – past affairs come to the surface; long-lost daughters; relationships and the misunderstandings that come with them; a failed marriage proposal; and characters coming straight from traumatic experiences in the Army. Yeah, it does all sound like a Celtic EastEnders, doesn’t it?

Thankfully, the performances are strong enough to give the shaky plot the added strength that it deserves. One of the standouts is Peter Mullan as a husband whose past secrets threaten his marriage to Horrocks’ wife. Mullan displays the right emotions to give depth to a likable character, even though he technically does something you should despise him for, and makes you hope he turns out okay. Horrocks also has a fun time with an emotionally-complex role, who again declares some things that nearly make her a villainous presence but she never goes into that area. As the young men who serve as the main focus for the film, George MacKay and Kevin Guthrie do fine work as do their respective love interests Antonia Thomas and Freya Mavon. Of the main cast, it is sadly Jason Flemyng who comes off the weakest with a singing voice to rival Pierce Brosnan in Mamma Mia. Then again, his character serves very little purpose to the plot which underwhelms because he’s built up as a potential suitor to Horrocks but only appears in three scenes and is never used to his full potential.

As a director, Fletcher has definitely taken inspiration from his earlier acting days by crafting a movie musical that everyone can enjoy. From belters like “It’s Over and Done With” and the closer “(I’m Gonna Be) 500 Miles” to quiet showstoppers like “Letter from America” and the titular track, Fletcher has made each and every one of them feel alive and active on the screen through strong performances and steady pacing. Wild Bill was no one-trick pony; Sunshine on Leith proves that director Dexter Fletcher is definitely one to watch.

Sunshine on Leith packs enough delightful energy into a funny, moving and entertaining musical whose plot may seem soap opera-ish to some but will still leave you with a great big smile on your face.