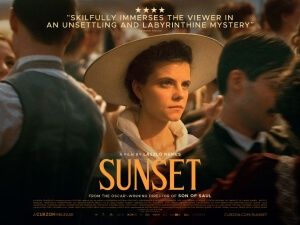 BASICALLY…: In pre-WW1 Budapest, a young woman (Jakab) arrives in the capital where she begins to learn some unsettling truths about society…

Hungarian filmmaker László Nemes certainly left an impression in 2015, when he debuted his first feature Son of Saul, a harrowing and uncomfortably intimate Holocaust drama which won acclaim from critics all across the world, and picked up several prizes including the Grand Prix at Cannes in addition to the Oscar, BAFTA and Golden Globe for Best Foreign Language Film. It was one hell of a debut, and like most people who strike big on the first go many were left curious about what he could next bring to the table.

A couple of years later, he has returned with his sophomore feature Sunset, which tackles a far bigger canvas than his first film and in some cases manages to make good on the promises of his stunning first film, although in other cases there are parts to the overall narrative that leave a lot to be desired, and despite it being an incredibly realised film just on a technical aspect alone, the story and the pacing are both perhaps not as solid as they perhaps could, and should, have been.

Set in early 1910s Budapest, which at the time is a thriving city of culture and wealth, a young woman named Írisz Leiter (Juli Jakab) arrives at the high-end hat shop that her parents once established, before they were killed in a fire when she was an infant. She is there to apply for a job as it is all that remains of her family, but despite her personal ties to the store’s history the new owner Oszkár Brill (Vlad Ivanov) denies her a position. She is about ready to leave when she catches wind of the possibility that she might, in fact, have a brother she previously knew nothing about, and that he is apparently a notorious gangster that is fronting an attack on the bourgeoisie society that dominates the capital. Írisz embarks on a city-wide journey to locate and learn more about her brother, uncovering a series of scandals and high-end corruption that forms a giant black mark on the city’s supposedly rosy image.

As he did with Son of Saul, Nemes is reluctant to let the camera stray too far away from the shoulders of its lead character, in a method that places us right along this person as we endure everything that she is experiencing first-hand (although in this one there is a little more freedom to move around and place the camera in other, more ambitious locations), and gives it a slight documentarian feel to the cinematography which makes it feel more authentic and grimy than the standard historical drama. Shot beautifully by Mátyás Erdély, the style of the camerawork and how grainy the visuals are (then again, I saw this movie on a special 35mm print, so that might have had something to do with it) gives off the vibe of the kind of big historical epic you don’t see a lot of nowadays, with cities that are just beaming with life and wonder but also feel lived in and even grimy. Setting itself apart from those kinds of films is, again like Son of Saul, how the camera stays more or less by the lead character’s side throughout most of it, so we are seeing all the ups and downs of this environment entirely from her perspective, no matter how horrifying or wildly disturbing some of the events she is witnessing are. If you looked at this movie purely from a technical aspect, it is a stunning piece of work, with everything from the sets to the costumes to the cinematography and everything else all being on top form and looking gorgeous in a movie designed to give off that impression.

The story, or at least for much of the film’s first half, is intriguing enough to make you interested in where it’s going to all lead, and gives you a mystery that you yourself wouldn’t mind solving alongside the lead character; however, it reaches a point where things start to get a bit directionless, and where you feel it could have naturally ended actually goes on for at least another half an hour. During the second half of this movie, there are a couple of reveals that you think will finally get the ball rolling on this film, but what ends up following is mainly a collection of meaningless and often repetitive scenes that seem to only exist just so they can bring this movie to an unnecessarily epic length, and they’re not defined well enough to leave you entirely certain about what is actually going on in this latter half of this film. There are points where you think the movie is going to wrap up, but then it just keeps on going for far longer than it ever needed to, with so many burning questions and threads that are largely left dangling or not given a clear enough resolution for the audience which may not be on the same wavelengths as the admittedly ambitious filmmakers behind it. Whereas your interest is high during the first half which is where the central mystery kicks in, it is mostly downgraded in the second half when it transpires that none of the same intrigue that held your attention earlier is present as the film gets nearer and nearer its merciful conclusion.

It definitely has a lot of artistic merits from its stunning technicals to the dazzling cinematography (which even makes lead actress Juli Jakab, who I am convinced was created in a lab using the DNA of both Emma Watson and Cara Delevingne, seem somewhat threatening) but a more focused story and less of a tendency to meander as it gets nearer the end would have made this a somewhat worthy successor to Nemes’ Oscar-winning debut. Instead, it’s a serviceable reminder that this guy is definitely one to look out for.

Sunset is a pure marvel from a technical aspect, with gorgeous cinematography that captures a very believable historical environment, but a story that fizzles out around halfway cannot seem to match its stunning visual prowess.

Check out Sunset showtimes in London
on Walloh.