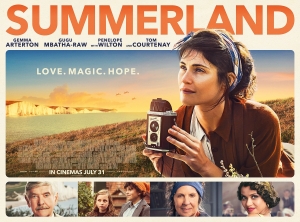 A couple of years ago, playwright Jessica Swale wrote and directed the short film Leading Lady Parts, made in response to the growing #MeToo movement and the overall conversation about sexual politics in the film industry. The short, which you can watch freely online, sees several actresses – among them Emilia Clarke, Florence Pugh, Gemma Chan and Felicity Jones – be subject to humiliating requests from a board of casting directors (one of them being Gemma Arterton, who also served as a producer) as they audition for a leading female role. While certainly satirical, the short also addresses the unwillingness of industry players to make changes in the way they portray female characters in film, and how things could become even more toxic should they continue sticking to the status quo.

Swale clearly took her own advice to heart when she set out to write and direct her first feature Summerland, in which female characters not only rule the roost, but are well-rounded, interesting and complex people who defy most conventions of the traditional Hollywood system. It is also a lovely, well-meaning film that provides star and executive producer Arterton with something that Swale’s short didn’t end up providing: a leading lady part.

She plays Alice, a reclusive and grumpy writer living alone by the beach in a coastal town in 1940s Kent, where she spends her days writing scientific studies that debunk several long-standing myths. Her world is rocked when, all of a sudden, she is forced to care for young London evacuee Frank (Lucas Bond); though at first she’d rather be rid of him sooner rather than later, the two of them do eventually start to get along when she starts discussing her science interests with the wide-eyed young lad. We also get to know what Alice was like some years ago, namely when she was in a passionate romantic affair with socialite Vera (Gugu Mbatha-Raw) which, unfortunately, did not seem to end well.

Both plot lines – the romantic one being shown in flashbacks – sync up with each other in admirable, if predictable, fashion; they are both gorgeously made and beautifully played, with Swale and cinematographer Laurie Rose getting some absolutely stunning views of the sun-drenched Kentish coast and countryside, which also amplify the feel-good mood of the director’s script. Swale rarely lets her theatre background show in a filmmaking style that feels very cinematic, with not just the gorgeous cinematography but a slew of natural performances making it feel a lot cleaner cut for the big screen. Arterton, as you might expect, is excellent here; the actress reveals a whole new side to her in a turn that’s self-assured, fierce and utterly compelling, especially in scenes where she’s dealing with some pretty severe heartbreak. She and Lucas Bond, also impressive, share a sweet chemistry that grows stronger as the film goes along, with her acting as the reluctant mentor to her intuitive young protégé.

As charming as the movie is, it does have a couple of misgivings that threaten to propel it into corny territory. A major conflict that comes in just over halfway into the film is one of those situations that could easily be solved by a simple conversation, but has to snowball into something much more damaging only because of the plot. This plot strand concludes with a sky shot that’s dangerously close to cringe-worthy territory, and is saved only by the strong performances of the actors who are selling these otherwise ridiculous visuals. The same goes for the ending which, while heart-warming in practise, seems like one convenience too far, in a story that often tends to trip itself up on numerous contrivances just to move its own plot along.

While the script isn’t exactly air-tight, it is the kind of movie that leaves you with enough good vibes to make it worth the trip to the cinema. The filmmaking is gorgeous and the performances stand out, from not just Arterton but also supporting players like Tom Courtenay as a kindly school headmaster, and Penelope Wilton who bookends the movie as Arterton’s older self. It’s a movie that is made for people to take their mothers or their grandmothers (or both) to see, and all parties will come away from it with pretty much the exact same opinion that it was, indeed, a lovely way to spend 100 minutes in an auditorium.

I know that I did, and while it probably won’t make my end-of-year best list I did enjoy my stay in Summerland, contrived though it occasionally may be.

Summerland is a gorgeously made, if not entirely spotless, historical drama that rests itself on the shoulders of some beautiful cinematography and a stellar lead performance by Gemma Arterton, but a few stand-out contrivances in director Jessica Swale’s script prevent it from being the truly stand-out drama it could have been.

Want to decide what the movie’s like for yourself?
Check out Summerland showtimes in London
via