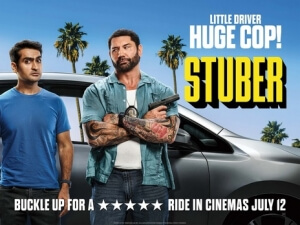 BASICALLY…: Mild-mannered Uber driver Stu (Nanjiani) picks up grizzled detective Vic (Bautista) who brings him along for a crazy adventure…

It’s always nice to see performers like Kumail Nanjiani and Dave Bautista continue to get work, as both in their own unique ways are gifted with enormous talents for entertainment; as a comedian and former wrestling star respectively, both Nanjiani and Bautista have the ability to give audiences exactly what they want, whether it be laughs or raw physical carnage, and thanks to their own breakout roles in movies like the former’s The Big Sick and the latter’s Guardians of the Galaxy they have also proven to be fine actors with a considerable amount of screen presence.

Together, they easily carry their first big-screen pairing Stuber, an action-comedy from Goon director Michael Dowse in which they both bring their A-game to material that doesn’t always strike gold, but hits just the right amount to pass as solid entertainment for at least one viewing.

Nanjiani plays Stu, a sporting-goods store employee who moonlights as an Uber driver – the title of the film comes from an amalgamation of Stu and Uber that he cannot stand – and who is desperately trying to maintain his perfect 5-star rating. Bautista, meanwhile, is Vic, a hard-ass cop obsessed with finding the gangster who killed his partner (Karen Gillan, in an opening scene cameo), but due to recently having Lasik eye surgery, his vision has been temporarily impaired and as such can’t drive. He calls an Uber, who of course happens to be Stu, and the two of them are thrust onto a city-wide adventure of carnage and mayhem as Vic gets closer and closer to nabbing his target, while Stu tries to hold it all together if he is to keep his perfect driver score.

It’s certainly easy to call this movie a more comedic version of Michael Mann’s Collateral, and the fact that it kind of looks like a Mann or Tony Scott film with some of its Los Angeles cinematography makes that comparison a little easier; Dowse’s intent is to merge the hard-boiled and even gruesome violence of a mid-to-late 90s action movie with the lighter comedic edge of a comedy from that same period of time, and he attempts this with sun-drenched imagery that’s complete with characters sweating up a storm in what is reported within the film to be record-breaking heat for LA, and placing it in a script with quirky characters and quick-witted lines of dialogue. Sometimes, the tones don’t entirely fit together, especially in scenes where bodies are piling up and both Nanjiani and Bautista are still trading quips with each other, but whenever it does work the film becomes more enjoyable, as you’re seeing all of this over-the-top violence play out in this very comedic scenario but unlike other films recently that have tried to mesh these two tones together (such as The Spy Who Dumped Me) it doesn’t go too far and manages to hold itself back enough for the audience to feel entertained.

This being a buddy movie, Stuber would have fallen flat on its face if the central pairing was underwhelming, and thanks to Nanjiani and Bautista’s easy chemistry it manages to stand just about evenly. They have good back-and-forths with each other, particularly when their arguments have to do with the topic of toxic masculinity – Bautsita’s character is this extremely grizzled, muscular and tough-as-nails person who goes so far out of his way to not display emotions that he even ends up neglecting his daughter’s need for parental love, and Nanjiani is the more level-headed of the two who is quick to call out his passenger’s BS and reluctance to show his more vulnerable side, paving the way for a fun dynamic that deconstructs the mental and physical psyche of male action heroes of movies past. The level of physical comedy that both actors have to go through here, especially Bautista, is admirable as they are just going for it here, from an early scene of Bautista attempting to drive with his impaired vision to a later fight scene that sees both leads simply hurl themselves into sporting goods equipment, and if nothing else you have to admire these actors’ absolute dedication to (literally) throwing themselves into danger and having an absolute blast while doing so.

Although the movie does have a good number of laughs to its credit, it’s by no means a great comedy, or even that great of a movie. There are a few plot twists and turns that don’t hold water (although it thankfully doesn’t do one cliché I feared they would throw out there, especially given who’s paired with Bautista in the opening sequence and what ultimately happens to them), and it sadly wastes The Raid’s Iko Uwais as its villain, who despite a menacing look and some seriously impressive fight choreography is relegated to just the stock bad-guy role that merely bookends the movie, barely appearing in between those ends. A lot of its other attempts at comedy don’t always work either, but that’s usually when the film’s two tones threaten to clash, and whenever a laugh doesn’t feel like the right thing to be doing in a scene where multiple people are being shot and killed.

The biggest attraction here is the pairing of Kumail Nanjiani and Dave Bautista, and they easily carry this movie through all its rougher parts as much as it does through its more focused bits, so it’s definitely worth a watch just for these two guys working well together on screen. Outside of that, it’s not wholly essential you see this movie (not in cinemas, anyway), but if you must then at least you won’t be too miserable afterwards.

Stuber might not rewrite the buddy action-comedy playbook, but it gets by just well enough thanks to the easy chemistry between Kumail Nanjiani and Dave Bautista who provide some solid laughs through their witty back-and-forths and admirable dedication to the film’s physical humour.

Check out Stuber showtimes in London
on Walloh.