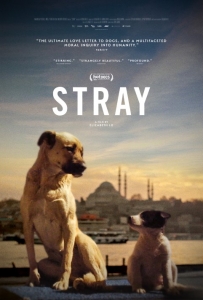 BASICALLY…: We follow a trio of stray dogs in Istanbul, where they embark on several inconspicuous journeys throughout Turkish society…

Unbeknownst to many, Istanbul is perhaps the greatest place in the world to be a stray dog. Laws were put in place over the last century that made it illegal for the authorities to detain and euthanise owner-less canines that are found wandering the streets of the Turkish city, which basically means that any dog without a leash can just go about and do whatever it wants, and there isn’t anything that anyone can do about it. A stray dog can gnaw at a garbage bag, poop in the street, and even cause bodily harm to other dogs, and they’re still given more freedoms than some of the actual humans living on the street.

Filmmaker Elizabeth Lo has clearly latched on to this concept for her new film Stray, which presents life in Istanbul from the perspective of some street dogs that simply go about their own business, but through their interactions with some of the locals we’re given a much more intimate portrayal of Turkish society than any human-centred film could have possibly achieved. That said, you’d better have a strong love of dogs if you’re going to sit through its entirety, because even with its short running time it can occasionally be a real test of patience.

In Lo’s film, shot between 2017 and 2019, we primarily follow three stray dogs throughout their aimless trek across Istanbul; there’s Zeytin, a young tan-coloured canine who easily drifts in and out of society, Nazar who adopts a more caring nature around humans, and tiny puppy Kartal who belongs to a litter living on the outskirts of a construction site. Of these three dogs, it is Zeytin who Lo tracks the most, as the director/cinematographer/editor seems just as enamoured with her calm, observant nature as others (including the audience) clearly are, and the filmmaker puts her in prime position as we wander the streets alongside the dog, coming across numerous individuals along the way including a group of young Syrian boys who have made refuge on a construction site, inhaling solvents and peddling the townsfolk for money.

Do not expect there to be some form of concrete plot here, or even a narrative of any kind; this really is just over an hour of watching a bunch of stray dogs go from one corner of Istanbul to another, while the soundtrack consists of light orchestral music played over background noise of the city and its human citizens conversing in the local language. From that angle, it’s easy to understand why some people might feel slightly disconnected from this movie, because I’ll be completely honest, there were times when even I was starting to feel a little bored by its repetitiveness and noticeable lack of plot (to a point where I was starting to equate it with Gus Van Sant’s infamous Gerry, which saw Matt Damon and Casey Affleck silently wander the desert… and that’s it).

However, Lo’s intent with this film was not to provide any sense of story for the audience, but rather to give them a fly-on-the-wall look at life in Istanbul from the eyes of a bunch of homeless mutts, and that is where the movie really shines. Beyond the fact that the main dogs are absolutely adorable – you’ll fall in love with Zeytin, and especially scrappy young puppy Kartal – Lo takes advantage of their freedom on the streets to capture some intimate moments of human passers-by, from arguing couples to homeless men to curious young children, without so much as a double-take by the passing authorities. The movie speaks a lot about humanity in general, and how – when observed like a David Attenborough nature documentary – they are capable of the smallest, but most fascinating, acts of kindness towards beings like stray dogs. They, too, express unaware delight in the little things that humanity provides, expressed the most during a blissful end credit montage of Zeytin howling along to the Turkish morning call to prayer. It’s a simple yet rich portrayal of life in this city, and puts both humans and animals in a strong, nurturing spotlight (except for cats who, in pure dog fashion, are constantly being chased by dogs whenever they’re spotted).

Stray is a film that definitely requires a lot of patience if you’re to get the full effect, but so long as you’re willing to sit through a plotless movie carried largely by your personal admiration for dogs in general, you’ll be rewarded with a gentle, breezy look at life from the most unlikely of places. As far as dog movies go, it’s certainly a step above something like The Call of the Wild; at least the dogs in this movie aren’t entirely made up of CGI and given creepy human-like expressions throughout it.

Stray is a breezy and ultimately rewarding dog-friendly documentary that requires a lot of patience with its noticeable lack of solid narrative, but viewers are bound to be rewarded with a gentle, intimate portrayal of life on the streets of Istanbul, as told through the eyes of some homeless dogs, as well as a nice display of humanity in general.

Stray will be available to rent or buy on digital platforms, including Amazon Prime Video, from Friday 26th March 2021.