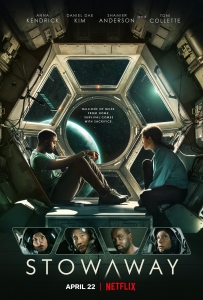 BASICALLY…: A space crew headed to Mars discovers an accidental stowaway (Anderson) on board…

Internet personalities being upgraded to starring roles in Hollywood is not uncommon – over the years, the likes of Andrew “King Bach” Bachelor, Flula Borg, Liza Koshy and Grace Helbig have prominently featured in movies and television shows – but fellow YouTuber Joe Penna (perhaps best known to online dwellers as MysteryGuitarMan) bucks the trend somewhat by going directly into feature filmmaking instead of glossy on-camera appearances. So far, it appears to have worked out for the Brazilian filmmaker, with his first feature Arctic – starring Mads Mikkelsen as a man trapped in the Arctic Circle after a plane crash – gaining healthy critical appraisal and general audience approval, and now his sophomore film Stowaway is bound to gain him a lot more attention from curious, patient viewers.

We begin the film as a three-person crew of astronauts – mission commander Marina (Toni Collette), medical doctor Zoe (Anna Kendrick) and biologist David (Daniel Dae Kim) – launch into space for a two-year mission to Mars. For the first twelve or so hours, everything seems about normal, but very soon they discover that there is an unexpected fourth person on board. His name is Michael (Shamier Anderson), an engineer who was part of the launch plan crew and was working on some of the electrics before an accident rendered him unconscious. You can imagine his shock, then, when he wakes up to find that he’s now millions of miles away from Earth, too far away for the ship to turn back around, and to make things worse the ship’s air filtration device has been destroyed, leaving nowhere near enough oxygen for the now four-person crew. Unless they can now find a way to restore their depleted supply of oxygen, one of them has got to go – and sadly, there’s only one obvious candidate that draws the shortest straw.

Like Arctic, Penna’s second film as director and writer (once again sharing the latter credit with Ryan Morrison) is also a tale of survival, but in this case it is of a slightly different variety, where it is not so much the desperate need to survive that forms the basis of the story, but rather the moral dilemma that is posed for its limited amount of lead characters. Essentially, either jettison this unexpected passenger from the spacecraft, or everyone dies from a lack of sustainable air before they even make it to the red planet. Penna and Morrison’s script stops short, however, of immediately favouring one side over the other, weighing each valuable option for all of their pros and cons, and having the characters debate the ethics like actual people having a conversation; there are no strawman arguments here, nor any sense that this crew of intelligent, well-skilled people – not even the ship’s commander, who in a slightly more conventional movie would have been the de facto cold-hearted villain – are willing to give this guy up so easily. You do see that each one of them is doing whatever they can to spare him from his likely fate, whether it’s conversing with on-the-ground support or sacrificing an entire crop’s worth of plant life just to produce healthy natural oxygen, and what this script does rather well here is that they really enforce the severity of the situation without going so far as to make unnecessary choices just for the sake of drama.

What makes it an even more difficult choice to make is that you do spend enough time with these characters to establish a believable connection with each other, so the simple solution of getting rid of one of them becomes a much tougher one to make. Some playful back-and-forths between Anna Kendrick and Daniel Dae Kim about their respective Harvard and Yale educations help to reinforce the actors’ natural likeability while also making them believable enough in their roles, and the ever-reliable Toni Collette brings genuine humanity to a character who, again, could have been portrayed far less empathetically in the wrong hands. Even the film’s titular stowaway, Shamier Anderson’s Michael, does manage to make himself useful on the ship, assisting Kim’s David with data entry and putting his engineering skills to the test during careful electrical inspections; he does prove himself to be an attentive, hard-working member of the crew, but sadly fate is simply not allowing that to be a long-term possibility. All four actors do great work here, guided by Penna whose direction lends a slow-burn pace to a scenario that needs all the time it can get to explore as many moral complexities as it can.

There is a sense of slightness, though, in the overall narrative due to said pacing, because while it’s got enough of a meaty hook and good characters to carry itself, sometimes it can feel just a bit too slow. The film is just under two hours, but there perhaps doesn’t feel like enough story to justify an extra twenty or so minutes of screen time; as much as the actors are selling their scenes, there’s only so much of Anna Kendrick and Shamier Anderson looking out into space with sad eyes that audiences can take, and you can easily point out a number of scenes that could have easily been removed or shortened to get it down to a more reasonable ninety minutes. The film’s climax, set amidst a rather impressive set of visual effects (at the very least, they look more convincing than some of the jarring green-screen shots in The Midnight Sky), does inevitably evoke memories of Gravity and the recent George Clooney sci-fi drama – also a Netflix release, funnily enough – and though it is executed well by a director who definitely knows how to use certain shots of space effectively, it’s hard to shake off the feeling that such a climax feels more on brand with other, similar space-set movies than what it’s trying to do with its own voice and set-up.

While it isn’t exactly a perfect movie, and honestly I’ll be surprised if people end up remembering it in the overall conversation of space dramas (regardless of whatever one may think about it), I was still rather pleased with Stowaway. It’s a dilemma movie handled with grace and reasonable intelligence, with strong performances and filmmaking that’s ambitious and well-made to offset some of its slighter moments. All in all, not bad for a former YouTuber.

Stowaway is a mostly pleasing second film by director and co-writer Joe Penna, which takes its time to explore the difficult moral dilemma at its centre at the expense of making the overall narrative feel a little slight, but strong enough filmmaking and four very good turns by its cast give it weight to prevent it from floating about too much.

Stowaway is now available on Netflix.