Into The Storm (Review)

Into The Storm (Review) 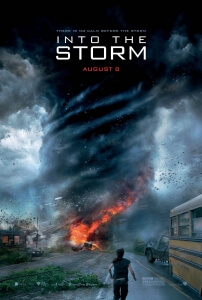 BASICALLY…: A series of natural disasters endanger a small town and its residents, who must try and survive them before something worse turns up…

In 1996, director Jan de Bont brought us a thrilling display of special effects – which, for the time at least, were pretty damn impressive – with Twister. Unfortunately, more time was spent on the uninteresting, irritating and downright insufferable human characters than giving us exactly what we paid good money to see. Even Phillip Seymour Hoffman couldn’t save that disaster of a disaster movie, and when he fails to elevate things then you know that it’s unsalvageable.

Which brings us to eighteen years later (boy, does the time fly), with the release of the spiritual sequel/remake that nobody really wanted to see. Into The Storm has the same problems that Twister had, except for one crucial difference that ultimately kills this movie – it’s not fun to watch. Like, at all. Twister, for all its problems, at least had “so bad, it’s good” qualities that make it enjoyable and often unintentionally hilarious to viewers all these years later. They can laugh at the sheer stupidity of the film’s concept of meteorology, they can be charmed by the campy antagonist played by Cary Elwes, and they can even be entertained by Hoffman’s groan-inducing comedic performance. None of that, sadly, transpires with Into The Storm, which feels more like a roughly-edited collection of home videos documenting a major natural disaster than it does a coherent major release – and in the age of YouTube, who would want to pay to see that?

The found-footage approach to this film is jarring and often distracting, to a point where you start asking yourself why it was made that way. It would have been just as fine, if not better, if it weren’t filmed from the point of view of someone holding a camera (which always looks way too professional to be real, especially when they imply that they’re filming on a camera phone at many instances). In fact, there are even times when events are “captured” from positions almost impossible to film from, which defeats the whole purpose of found-footage in the first place. Films like Cloverfield and Paranormal Activity managed to get this down fine, because they rarely if not never deviated from what was being filmed on whatever device the characters used. Here, though, there’s no reason for there to be all these aerial shots of tornadoes wiping out entire airports and the like if they don’t imply that it’s all somehow being recorded for viewing in this fictional reality that the filmmakers have created. There are times when it makes a little more sense, for example when it’s implied that the camera belongs to a news helicopter covering the events from above, but even then there’s no way that a helicopter could get that close to a giant cyclone without causing immediate danger to its passengers. You’d have to be really careful or incredibly stupid to even think about doing it.

Speaking of stupidity, having boring and one-dimensional characters be more of a focus than the actual storm is one thing but for most of them to be given the IQ of a block of wood is just unforgivable. The Walking Dead’s Sarah Wayne Callies, as a meteorologist assisting a group of storm-chasers/documentarians (hence the dozens of hidden cameras – sigh), may be the female lead but she gives us no cause to root for her when she’s introduced to us as having left her five-year-old daughter to go chasing dangerous tornadoes. Basically, it’s set up that she would rather risk being killed in action rather than tend to her young child at an age where they seriously need their parent – yeah, because that definitely sounds like a just winner right there, guys. Other major characters fare no better, with Richard Armitage (sadly lacking his charisma and screen presence from the Hobbit films) mostly walking around with not much to really do except ponder at the destruction in the various aftermaths with a stiff and monotone delivery, and a couple of rednecks who simply cannot exist in the real world due to their overwhelming stupidity when it comes to storm-chasing just to gain hits on YouTube. Trust us, you’ll find that the only characters worth rooting for are the bloomin’ tornadoes, hoping that they’ll suck up these idiots and transport them to Oz or somewhere where they can cause all the trouble they want but at least they wouldn’t be here anymore.

There’s just simply no joy to be found in this film, which is much harder to process considering how much stupid fun a similar film like Twister was. Even the visual effects aren’t that impressive, and prove to be disappointing when you see that $50 million was put into making this film. Much more stunning is the production design of the streets and suburbs covered in debris, but sadly that’s too little too often. Overall, it’s a fairly dull and mind-numbingly stupid disaster movie that ironically should draw more attention to the other, much more fun bad cyclone-based disaster movie with Phillip Seymour Hoffman.

Put short, Into The Storm is exactly where this film can go.

Aside from failing to produce interesting or likable characters as well as a competent reason for the otherwise pointless found-footage angle, Into The Storm fails to deliver the next big and exciting disaster movie and instead shoves through the mailbox a clumsy, illogical and annoyingly stupid film that even the hardcore genre fans can be unrelentlessly bored with. Avoid like you would an actual tornado.