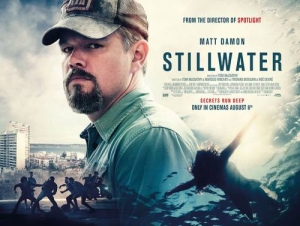 BASICALLY…: A blue-collar father (Damon) heads to Marseilles to clear the name of his incarcerated daughter (Breslin)…

When director Tom McCarthy’s previous theatrically-released film Spotlight won the Oscar for Best Picture over hotly-tipped favourites like The Revenant and Mad Max: Fury Road (though by all accounts, it was a worthy winner), a lot of people suddenly became very interested in whatever he would go on to do next. As it turned out, he would follow his investigative journalism opus with two wildly different movies: the direct-to-Disney+ family outing Timmy Failure: Mistakes Were Made, which featured a child wannabe private detective and his imaginary polar bear sidekick, and the much darker crime thriller Stillwater, a film that occasionally makes the other movie feel a bit more realistic.

The film, which McCarthy co-wrote with Thomas Bidegain, Noé Debré and Marcus Hinchey, sees oil rig worker Bill Baker (Matt Damon), of the titular town in Oklahoma, travel to Marseilles in order to visit his daughter Allison (Abigail Breslin), who’s been imprisoned for the last four years after being convicted of the death of her girlfriend Lina. He learns that there may be new evidence suggesting that Allison is innocent as she’s always claimed to be, and soon enlists the help of local actress Virginie (Camille Cottin) to carry out his own investigation, bonding with both her and her young daughter Maya (Lilou Siauvaud) in the process. The further Bill takes his investigation, though, the more he becomes torn between his duties as a parent and his own morals, especially when finding the true killer is less straightforward than it seems.

There are intriguing themes throughout Stillwater, which takes familiar Hollywood ideas such as that of the all-American hero in a foreign landscape, and gives them a more grounded tone that really speaks to the bare-boned patriotism that such narratives have inspired over the years. Matt Damon’s Bill Baker is a very American lead, almost like an international caricature of those who come from the more conservative states; he’s got a burly figure, cap and glasses permanently glued onto his head, sporting a massive goatee and a soft-spoken Southern drawl like Larry the Cable Guy with class. A redneck in all but name, Bill serves as the main focal point in a film that takes place almost entirely in the rough suburbs of this French city, and naturally his ideas of justice and sensitivity clash greatly with those of local folk he encounters, especially when it comes to dealing with racists and getting into fights with rowdy gangs. It is interesting to see how this character, who perhaps fancies himself as this Liam Neeson or Charles Bronson-type hero serving out old-fashioned American vengeance on European shores, fares poorly when thrown into a lot of these rough situations, often getting his ass handed to him while barely making it out in one piece, which really goes to show how far from reality a lot of the entertaining movies he is perhaps inspired by really are.

Although, that isn’t to say that Stillwater is itself completely devoid of unbelievable circumstances. A reveal late into the movie happens purely by complete chance, and it speaks to the number of coincidences in this script that such a thing could even be possible if it weren’t for the precise and convenient way that it is handed to the main character. At times, it actually does turn into the kind of brutal American thriller that it was doing a decent job of picking apart, including a third-act turn when it suddenly becomes Denis Villeneuve’s Prisoners all of a sudden, which sometimes don’t fit the rest of the breezy storytelling that the movie is otherwise trying to aim for.

Perhaps, though, it is too breezy of a movie. It reaches a point around the midway mark where any sense of urgency and pacing suddenly grinds to a complete halt, and it starts to become a loosely connected series of vignettes with Damon’s Bill adjusting to life in Marseilles. It’s not that the scenes themselves are bad, as it does allow time – perhaps too much so – for character development, and of course the actors all do really good here (Damon, who’s very good in the movie, shares sweet chemistry with young Lilou Siauvaud), but there is barely a sense of direction as they play out, which is disappointing because it starts off intriguing enough, only for it to pirouette into meandering bloatedness around the middle onwards. You can clearly see where scenes could be trimmed or cut entirely, and not only would the movie flow a little better but it would also get rid of unnecessary flab that takes it well past the two-hour mark.

Obviously, Stillwater isn’t on the same level as McCarthy’s Spotlight, but there is at least some level of ambition to some of its ideas and themes, even if at times some of it is wasted on a script that needed perhaps a bit more work on it before giving it the go-ahead.

Stillwater has some ambitious ideas about the classic American-in-Europe thriller trope, as well as some strong performances by the likes of Matt Damon, but it ultimately becomes so consumed by its own presence that it starts to become much more of an unnecessary slog to get through.

Stillwater will be released in cinemas nationwide on Friday 6th August 2021 – click here to find a screening near you!