Stephen Lang Is Back For The Avatar Sequels!

Stephen Lang Is Back For The Avatar Sequels!

In a surprising bit of casting news, it turns out that Stephen Lang isn’t as done with the world of Pandora as we thought he would be. 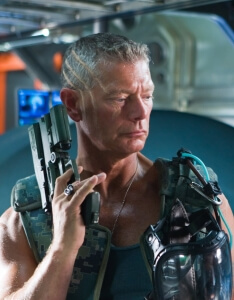 The actor will return as baddie Colonel Miles Quaritch in James Cameron’s multiple Avatar sequels, all set for releases in 2016, 2017 and 2018 respectively. The CG/live-action series of projects will reportedly start filming back-to-back next year.

“But wait just a second,” you may be pondering. “I’m one of the billions of people around the world who saw the first film, and I happen to know for a fact that he pretty much snuffed it by film’s end. How’s Jim going to get around that hole?” Unfortunately, you might have to wait for a clear answer. In a statement released by studio 20th Century Fox, Jim plays coy: ““Steven was so memorable in the first film, we’re privileged to have him back… I’m not going to say exactly HOW we’re bringing him back, but it’s a science fiction story, after all. His character will evolve into really unexpected places across the arc of our new three-film saga. I really look forward to working with such a gifted actor, who’s also become a good friend.”

Lang will join returning actors Sam Worthington, Zoe Saldana and Sigourney Weaver (who also didn’t make it out of the first one alive… does Cameron have a thing for resurrecting characters like an everyday Jesus?) in the three sequels. Josh Friedman (War of the Worlds) has been tapped to write Avatar 2; Rick Jaffa and Amanda Silver (Rise of the Planet of the Apes) will pen Avatar 3; and Shane Salerno (Savages) is doing Avatar 4. Cameron will produce all three sequels with Jon Landau.

It seems the rehiring of Lang and Weaver proves that Cameron may have killed them off too soon, and has much bigger plans in his follow-ups. Hopefully his writers will come up with valid reasons for their return, as well as more powerful storylines than the mocked Dances with Smurfs one in his self-penned script for the first movie, but also keep in mind that the incredibly realised CG world of Pandora has to keep on dazzling audiences worldwide. It is the highest-grossing film of all time for a reason, and the evidence is entirely visual.

As stated, Avatar 2, 3 and 4 will hit cinemas worldwide in 2016, 2017 and 2018 respectively. That gives us a solid three years before we have to worry about slipping on those oxygen masks to confront those giant blue cats again…