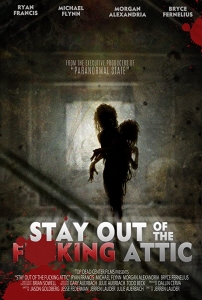 BASICALLY…: A group of movers find themselves facing some deep horrors during an all-night shift at a Victorian mansion…

It’s been a good long while since we’ve had ourselves a proper little Nazisploitation movie, a horror sub-genre that’s largely been dormant since the days of Ilsa, She Wolf of the SS, but now returns to the fold thanks to Shudder’s distribution of the deliciously-titled Stay Out of the F**king Attic.

With the new release of Stay Out of the F**king Attic, though, I guess those picketers finally found something else to complain about because this one is arriving on the horror streaming service with little to no fanfare. While it’s not entirely undeserved – by most accounts, it’s not a particularly great film – this should still give genre fans exactly the kind of madness that they’re hoping for.

The film starts out with a small group of movers – Schillinger (Ryan Francis), Imani (Morgan Alexandria) and Carlos (Bryce Fernelius), all former convicts – parking up at an old Victorian house. They’ve been hired by the house’s elderly owner Vern (Michael Flynn) to pack away everything on the first and second floors by the next morning, which means an overnight shift for the movers with an incentive of four times the regular pay. Vern’s only rule? Well, guess where the title comes from (and add the basement to that list, too). Of course, there wouldn’t be a movie if curiosity didn’t get the better of them, and soon they discover that the weird old German guy might actually be a bit more Third Reich-y than he first let on, and might also have some horrifying experiments within his grasp to terrorise them throughout the night.

As a cheap, mindless bit of gory exploitation, Stay Out of the F***king Attic works perfectly fine, so long as you cast aside any logical thinking whilst watching. Like most Nazisploitation movies, there’s a lot of silly stuff here – Vern’s true identity is a particular WTF moment, as is the reveal of his deformed henchman and what, or even who, is being held in the titular f**king attic – which is often accompanied by some decent practical effects (at least, decent for the low budget this movie was clearly working from) amidst a storyline that gets more and more ridiculous as it moves forward. The writing here, provided by four separate writers including director Jerren Lauder, leans heavily into pure horror fantasy, with strong hints of body horror and even science-fiction, and though much of it rarely makes sense that’s not what you go into a movie called Stay Out of the F**king Attic wanting to get out of it. More so, you’re hoping for a disposable, trashy exploitation movie that passes the time delicately, and when it simply becomes that type of dumb movie, it’s digestible enough for genre fans.

Less successful, though, are its clumsier attempts to insert social commentary into the works. In particular, the central theme revolves around anti-racism; a noble message which is sadly still needed in this day and age, but the way it’s incorporated into the overall plot is very ham-fisted and perhaps a bit too above this movie’s level of thinking. It also raises some issues about some of the characters, and not just the evil Nazi; we learn that one of the protagonists is a reformed neo-Nazi, who still harbours swastika tattoos from those dark days only so it may factor into the plot later on, and despite his insistence that he’s changed his ways, there’s something a little uncomfortable about rooting for someone who at one point in their life was associated with particular hate groups. The film’s messages about the dangers of stereotyping and putting ethnic minorities in a box also come across as slightly hypocritical when it portrays the only black character, Morgan Alexandria’s Imani, as a jive-talking, rap-listening clone of Regina Hall’s character from the Scary Movie films, only less intentionally funny. It’s easy to see what the filmmakers were trying to do here, but the muddled attempt only sullies its good-ish intentions.

Basically, when the movie tries to be anything but the dumb, trashy exploitation movie it was always supposed to be, it’s less fun to watch. For many, though, Stay Out of the F**king Attic should provide enough genre thrills to justify their apparent appetite for the return of Nazisploitation, though don’t expect quite as big a protest by bored UK citizens over this one’s release.

Stay Out of the F**king Attic offers some entertaining genre thrills whenever it throws back to classic Nazisploitation horror movies, but is less inspired when it tries inserting social commentary into the mix.

Stay Out of the F**king Attic is now available to stream on Shudder.