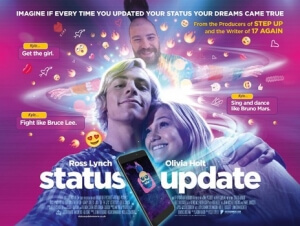 BASICALLY…: A high school student (Lynch) comes across a magical app that makes whatever he posts as a status update come true in real life…

So, these next four reviews are all connected with each other, in a little story arc, if you will. On Friday 9th February 2018, I went to the cinema as I usually do on a Friday to check out the newest releases, and this was an extra special occasion because, instead of the average two or three, I saw four movies back to back in the same day. That’s over 400 minutes of film that I sat through in, again, just a single day; all of variable quality with no two movies being the exact same viewing experience. How, you must wonder, do I have the strength and stamina to not only make it through four movies at the cinema in less than 24 hours, but also write four separate reviews on each one of them? Simple: as it turns out, there’s plenty of stuff to talk about with each and every one of them, but the main takeaway from the whole day (aside from the fish and chips I got afterwards, because I bloody well deserved it) was that life continues to surprise me in the least likely of ways, and it would be a disservice if I didn’t write about that in some capacity.

For instance, I woke up that morning thinking that Fifty Shades Freed, which was indeed one of the movies I saw that day (and we’ll get to that one in due course), was going to be the worst film I would see over this one-day marathon. Oh, but fate had far more sadistic plans up its sleeve just for poor me; little did I know that it would be Status Update, a movie that looked like crap from the trailers but managed to elevate itself up to literal diarrhoea, would not only be the single worst thing I would sit through that entire day, but is easily the most aggravating, punishing and head-poundingly terrible thing I have witnessed on the big screen since Grimsby. No joke; this gigantic piece of dog shit was way harder to sit through than Fifty Shades Freed, or even any of the other Fifty Shades movies… yes, it’s THAT torturous.

The story, if you must know, is of extremely good-looking teenager Kyle (Ross Lynch) who despite his obvious handsomeness somehow struggles to fit in to his new school in Connecticut after he is uprooted from his home in California following the separation of his parents (Rob Riggle and Wendi McLendon-Covey). When his phone is broken by jock bullies, because of course this high-school movie has jock bullies in it, he takes it to be fixed at the mall where he encounters a particularly unappealing – or whatever this movie considers to be eccentric and whimsical – kiosk clerk played by Instagram celebrity The Fat Jew (are you still with me on this? Because if not, I can relate because by this point I was about done with this movie too), who lets him know of a mysterious app which lets any status update he types automatically come true. So of course, like any other young douchebag, he uses this new power to his own gain, by increasing his popularity to a point where he’s suddenly a beloved singer and star hockey player, whilst also using it to gain other thinly-written stereotypes as friends like the fat dorky friend (Harvey Guillen), the hot and bland-as-cream-paint love interest (Olivia Holt), and the snooty and stuck-up gold-digger girlfriend (Courtney Eaton, who was in Mad Max: Fury Road and is now resorting to crap like this).

This is beyond just the same generic teen fantasy you’ve seen a million times before, with “twists” you can call miles off because it’s so incredibly predictable, but this is one of those movies that will make you hate everything to do with millennials as well as their mere existence (and as a millennial myself, that’s saying a lot), because every single thing these absolute miserable excuses for characters do is just talk about their social media profiles, and incidentally come across as the most vain and aggressively self-absorbed little shits you could possibly know. By the end of the first act, you’re about ready to punch every single one of them because they are all unlikeable and often mean-spirited caricatures that only get worse as the film goes on, contrary to the movie’s manipulative tendencies that force you to think you’re watching an emotionally tender moment because of the sad music that’s playing, but it never works because you’re constantly reminded of how nasty and obnoxious these people really are. Seriously, every single person in this movie is an absolutely horrible person, from the young main characters who again are just self-absorbed as the next entitled teenager, to the teachers who are just hurling verbal abuse at their students in class (and who for some reason are never present in the hallway when there are very public displays of bullying going on), to the main character’s family who clearly think very little of him when they’re not focusing on their own selfish goals – his little sister, an apparent anime obsessive who dresses in wigs and dresses that no anime fan would actively wear outside a convention – to, worst of all, a gay best friend character who could not be more stereotypically gay if the 40-year-old writer of this teen comedy tried, who for really no reason at all has it out for the main character and is so awful in the things he says and does that it is laughable that the filmmakers thought they could get away with this character that makes the film seem somewhat homophobic. There is not one person in the entire film who is even remotely deserving of empathy, not even the main character who does and says things that are just terrible but we’re expected to still root for only because he’s the main character; like the film itself, he’s a snarling and grossly unpleasant caricature designed purely to make its audience hate young people and their self-absorbed ways.

This is a movie that is written terribly and directed even worse, because Scott Speer – who bafflingly has another movie out next month, teen romance Midnight Sun which if there is indeed a God will be far better made than whatever the hell this is – makes it look and feel like a Disney Channel movie with the kind of over-the-top acting and camera angles that should have died back in the early 2000s, and probably made just as cheaply too. It’s an ugly movie to look at, since the colour saturation makes this high school look completely miserable and the wide-angle lens close-ups of The Fat Jew’s disgusting face and atrocious hair are enough to make you look away from the screen in complete disgust. I’m serious when I say that sitting through this movie was one of the hardest things I’ve had to do in a cinema in a long time, because one minute I was put off by the unpleasant filmmaking brought to this cliché-heavy script, and the next I was aggravated by how awful and unappealing the characters were. I was about ready to walk at several points in this movie, including one that will surely rank amongst the most embarrassing moments of Famke Janssen’s career, but I persisted and managed to make it to the first ending credit, to which point I bolted out of the screen as fast as I could and recollected myself in my absolute anger about the fact that I watched this utterly awful movie in a cinema, before moving on to the next one.

I hope you and everyone else reading this appreciate the things I see and do for this website, because this movie was absolute torture for me to sit through, and the worst part was that this was the first movie out of four I had to see that day. Luckily for me, quality aside they would not be as painful and mercilessly punishing to sit through as Status Update, which was easily one of the hardest movie-going experiences I had been through in a very long time.

Status Update is not deserving of your time and attention in any capacity, as this is an utterly awful movie from beginning to end with terrible and unlikeable characters, a infuriatingly clichéd plot, and some of the most aggressively lazy filmmaking you’ll see all year. Dislike.