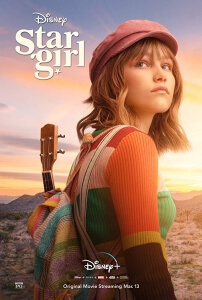 BASICALLY…: A high school student (Verchere) becomes fascinated with a new mysterious and quirky student who calls herself “Stargirl” (VanderWaal)…

The “Manic Pixie Dream Girl” is a label you’re probably very familiar with, but might not be able to determine a clear example of one. Defined as an eccentric female character whose only purpose is to serve as the love interest and the provider of spiritual wisdom towards the (often) male lead character, your mind might go towards Natalie Portman in Garden State, or Kate Hudson in Almost Famous, or basically any Zooey Deschanel performance ever.

But finally, in 2020, we have a new winner of the not-so-coveted Most Blatant Example of the Manic Pixie Dream Girl in a Movie Ever Award, which goes to the new Disney+ original movie Stargirl, a film that might as well be called Manic Pixie Dream Girl: The Motion Picture because not only does it contain practically every cliché under the sun when it comes to this label, but it awkwardly tries to cram it all in to a more modern-age story where an aged trope like this doesn’t really feel natural anymore. It makes for a very strange, all-too serious and even pretentious movie that has none of the genuine charm it is desperately trying to convey.

The main character of the movie is Leo (Graham Verchere), a 16-year-old high school student in a quiet Arizona town who becomes fascinated with the new kid Stargirl (Grace VanderWaal), as she so calls herself. Pretty soon, Leo and the rest of the school begins to fall for her quirky charms – among them a retro dress sense, playing the ukulele, owning a pet rat, having no phone, and freely wandering around the Arizona plains – and, of course, find the confidence that they’ve been lacking until now.

If you have ever been bothered by the irritating perkiness of the Manic Pixie Dream Girl trope before, then this movie will absolutely destroy you; there is no question that the character of Stargirl is one of the most stereotypical examples of the label in years, a painfully obvious construct by people who seem to have very little understanding of what it means to be both young and also a little bit eccentric. She is written to be so perfect in this movie – she instantly wins over an entire crowd at a sports match through the power of her music (even though she doesn’t seem to be connected to any microphones or anything, so we are just left with the thought that nobody in that audience can hear what she’s singing), and later just straight up wins a speech contest with something we never even hear her perform because it instantly cuts away just as she begins – that there is very little reason to care about her, because she seems to be completely infallible to a point where she doesn’t even seem human. Not even VanderWaal – a former America’s Got Talent winner and singer-songwriter in her own right – can bring a sense of humanity to the character, because her performance is rather robotic and her chemistry with other actors is flat, so it’s not even a case where you can say that the actor is making the most of the material.

Although, the material at hand is pretty lame to begin with, so it’s doubtful that any other young actor could have done much better. The film is comprised of coming-of-age tropes as tried and tested as the mechanics behind the titular character, with character who range from bland to mere background fodder (Leo has friends in the movie which might as well not even be there, because they have absolutely no discernible character to speak of). None of the drama feels genuine, because it’s revolving around a character that by all accounts doesn’t seem to have any flaws to speak of, so what drama there is seems to be a lot more shallow than it should be. It’s just a lot of things that don’t work mixed up into a movie that probably would have played better twenty or so years ago, but nowadays just doesn’t cut it as well as it could have back then.

Most of all, the movie feels incredibly cynical, as if Disney really wanted to make a film that could compete with films like Lady Bird or one of the many classic John Hughes movies of the 1980s, but lacks both the depth and genuine humanity that they easily brought to the table. This movie feels so much like a product that it just straight up turns into a music video at several points, with VanderWaal and several backup dancers looking into the camera (which is often set at a different angle than the audience they are performing to in the movie) while they’re singing and dancing, to a point to where you are surprised that it doesn’t show any credits at the bottom of the screen when the song concludes. Again, none of its more sincere moments feel earned, because they feel so calculated and contrived that it’s impossible to legitimately care about any of it, other than how much Disney is clearly trying to appeal to a certain crowd with this movie.

It just doesn’t sparkle, in a disappointingly trite coming-of-age drama that can’t seem to shake its more corporate reasons for being, the only exception being to show audiences the clearest definition of the Manic Pixie Dream Girl trope that has become available in years.

Stargirl is a hollow and disingenuous coming-of-age story that feels cynically put together by a studio desperate to appeal to a particular target audience, complete with a blatant example of the Manic Pixie Dream Girl trope that will astound, and irritate, critics of the label for years to come.