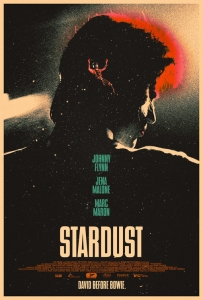 We will likely not see a full-blown David Bowie biopic for a very, very long time, seeing how the iconic singer – who passed away five years ago – famously disallowed any kind of official biography to be written or filmed about his life, and that includes permission to use any of his eclectic back catalogue within that biographical context. Until that definitive and approved Bowie movie can be made (if ever), any film that tries to tell his story will undoubtedly be restricted to feeling like nothing more than one of those cheap made-for-television movies, the kind that are made super-fast to solely capitalise on a celebrity’s fame within the current zeitgeist.

Stardust definitely falls within that category, and the fact that it is legally forbidden from using any of Bowie’s actual music hurts it even more than you might imagine, as it leaves only a cold, flat attempt at an unauthorised look upon Bowie’s early career which, according to this movie, is far duller than it may seem.

Singer-actor Johnny Flynn portrays Bowie, who we meet in 1971 as he’s experiencing some modest success in the UK, but over in America his work is struggling to be accepted. In response, Bowie’s record label organises a tour across the States with publicist Ron Oberman (Marc Maron) accompanying him; however, due to visa issues, he’s prevented from playing any proper gigs, and is instead delegated to singing cover songs at shady lounge bars and a small convention for vacuum cleaner salesmen. Even more difficult is Bowie’s extravagantly odd persona, which is baffling journalists and audiences left and right, and even Bowie himself feels unsure of who he is. All of this will eventually lead to Bowie’s creation of his infamous on-stage persona Ziggy Stardust, which soon serves as a jumping point for his career from then on.

The opening makes it clear that the film is “mostly” fiction, which right there suggests that any liberties that the filmmakers have made with this story should be accompanied with the tiniest pinch of salt possible, so any sense that this is a true biopic immediately goes right out the window. It wouldn’t be fair to even call it a biopic, as it’s more of a road trip movie than anything with both Bowie and Oberman bickering and then bonding as the movie goes along, but even then it’s numbing to sit through because not a whole lot is happening that’s really all that interesting, nor do we really get to know either of them well enough outside of surface-level information about their personal lives. It’s especially thin when it comes to Bowie himself, despite manipulative and over-simplified attempts to show his family’s struggle with mental illness, as he is portrayed mostly as a foppish fool whose anti-social tendencies just make him look like an arrogant sod, and as much as Johnny Flynn has proven himself previously to be a decent actor, he isn’t convincing enough to properly portray the aloof genius that Bowie would later become known as.

Flynn isn’t entirely at fault here, though; he’s working from an extremely dull script, written by director Gabriel Range and co-writer Christopher Bell, which fails to find anything substantial to latch itself onto for its duration. Any conflict in the film, whether it’s an argument between Bowie and Oberman or a spat between Bowie and a woefully underused Jena Malone as his wife Angie, is resolved within minutes, and certain plotlines such as nabbing a career-launching interview with Rolling Stone Magazine end up going nowhere. There isn’t a whole lot that happens in this film, and because there aren’t really many characters or story arcs that are holding it together, it very quickly becomes rather boring to sit through, leaving any Bowie fans wildly disappointed and anyone who’s not as familiar with his work completely lost. The movie is like a five or ten-minute section from a standard biopic that covers the main figure’s early rise to fame, which was then expanded to a 109-minute movie, and as it turns out there’s not much to pick apart that a more detailed movie could have done in a much shorter time frame.

Then, there’s the music – or, more accurately, the lack of music which really matters when it comes to David Bowie. Because there are no licensed Bowie tracks performed here, it leaves the filmmakers in an awkward position where they constantly name-drop some of his early songs like “Space Oddity” without ever actually performing them, instead resorting to cover tracks of other artists which gives the false impression that Bowie was primarily a cover artist in his early days. Say what you will about Bohemian Rhapsody, but at least it featured the songs of its star figures; Stardust’s lack of Bowie on its own soundtrack seems like a wild insult that undermines the singer’s legacy with a film that barely acknowledges the music he made, even in his early years as a performer. It’s not often that a film is sorely sabotaged by its own soundtrack – or, in this case, the lack of an appropriate one – but this might just be a rare exception.

It’s not worth checking out if you’re a David Bowie fan because you’ll barely find anything new about the singer that you probably don’t already know, and it’s not worth checking out just to see how it fares as a standard biopic, because it fails to grasp anything that made this strange performer so memorable in the first place. You’d get much more out of any other David Bowie movie like Labyrinth or The Man Who Fell To Earth – hell, his cameo in Zoolander has more substance to it than this.

Stardust is a painfully dull attempt to tell the story of David Bowie’s early career, which the lack of an authentic Bowie soundtrack, and a conflict-free script which greatly undermines the singer’s influence, makes it almost impossible to recommend.

Stardust is out now on digital platforms.