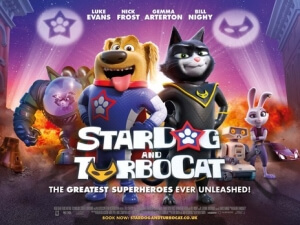 BASICALLY…: A superpowered dog (Frost) and a vigilante cat (Evans) team up to save the day…

So, how was your Monday evening? I could have spent mine seeing an early preview of one of the year’s most talked-about movies Parasite, but instead I went to see StarDog and TurboCat. Just typing that sentence further makes me realise how much of an idiot I am.

There is good news and bad news, though. The good news is, I did end up seeing Parasite the next day (look out for that review soon). The bad news is, I still had to see StarDog and TurboCat. It might not be the most wretched animated film I’ve seen all year – somehow, The Queen’s Corgi has the edge, thanks to Trump telling his dog to “grab ‘em by the puppy” – but it’s such a shoddy, awkward and wildly cheap experience that it comes in at a close second.

The plot starts in 1969, when a dog named Buddy (voiced by Nick Frost) is sent up to space (for… reasons). However, an accident causes him to wake up fifty years in the future, in a town where pets are entirely demonised (for… reasons). He ends up teaming with a cat named Felix (Luke Evans), who moonlights as a pro-pet vigilante named TurboCat (for… reasons), to help find his former owner, and slowly discovers that the accident also gave him incredible superpowers (for… oh, you get it).

Everything in this movie happens for no real reason. Why are pets effectively seen as vermin in this weirdly underpopulated town? No reason. Why does it seem like there is only one police officer in this entire universe, who seems to single-handedly be judge, jury and executioner on all things pet-related? No reason. How is it that the animals, even in the presence of humans, only seem to walk on two feet instead of all fours? No reason, and quite frankly I could go on all day but you kind of get where I’m coming at. This is a universe where nothing is explained nor is it in any way making some kind of logical sense, and I understand that this kind of movie is made for young children but that shouldn’t be an excuse for creating a universe that not even the mind of a child could figure out how it works. It feels like the writers just made all of this stuff up on the spot, and then gave it to the animators who in turn made all of this nonsense look and feel just as aimless.

Or, as it seems, the most cost-effective animators that they could find, because the animation in this movie is wildly cheaper than you might think. Take this town for example, which seems to have been heavily affected by Thanos’ snap, because there is barely anyone inhabiting these oddly quiet and empty streets aside from a few random citizens that we see over and over again. No wonder that the main cop in charge of rounding up all of the animals also appears to be the lone figure of authority, because there is no mayor or even a police commissioner to give any orders (in fact, there appears to be more animals in this movie than humans, so his mission to rid the town of all pets has drastically failed). You can see the corners which have been cut by the animators, who seem to have just saved money and effort by only rendering a handful of CG figures and then pass that off as a heavily populated town, which makes the film’s stakes seem even lower because it doesn’t seem much will be lost if this ghost town gets taken over. Even the design of the town itself feels cheaply rendered, because at times you look out on the horizon and see that everything just stops, like when you’re in a video game and there is no scenery beyond a certain point because that’s as far as the renderers went in the design. Like The Queen’s Corgi, if you were to just look at a still shot of the characters in action then it doesn’t look that bad, but when in motion this animation is about as ambitious as having a drink of water in the middle of the day.

The way that the overall direction and writing is, it’s also incredibly awkward. The timing in the comedy is completely off, so punchlines will arrive several beats after they’re supposed to, and will just go on and on without anyone to reign them in. The voice acting is all over the place, especially Nick Frost who’s saddled with an American accent that does not sound right whatsoever, and with dialogue that mainly consists of him doing an impression of Morty from Rick and Morty (a lot of “aw jeez” for him to go around). The pacing is shockingly slow; even for a 90 minute movie, this feels like it goes on forever, particularly in a climax where you are just anxious for the film to finally wrap itself up, but it just never seems to want to end. Not even the characters themselves are well defined, because their motivations will just switch at the drop of a hat, and they’re either too annoying or too bland to really care about.

It’s just not a good movie, with both children and parents likely to feel utterly bored by the lame characters and DOA comedy, with not even the cheap animation serving as a source of entertainment because it’s all so nonsensical. I honestly feel embarrassed to have even watched it, to a point where I refused to make eye contact with anyone as I bolted out of the cinema once it was finally over. Like I said, though, it’s not quite as awful as The Queen’s Corgi because at least this movie, as bad as it is, doesn’t have a scene where Trump gets his dick chomped by a royal corgi.

StarDog and TurboCat is a painfully cheap and lame animated movie, which from the very start makes absolutely no sense and has animation which makes even less sense, but also has inconsistent writing and direction which makes it an incredibly awkward movie to watch. Take your kids to see something else over this, because while it’s not quite as appalling as The Queen’s Corgi it’s still a pretty rough animated movie to sit through.

Want to decide what the movie’s like for yourself?
Check out StarDog and TurboCat showtimes in London
via