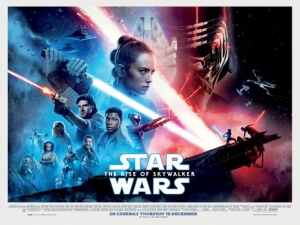 BASICALLY…: As the remains of the Resistance prepare to face off against the First Order for a definitive clash, the age-old war between the Jedi and the Sith also reaches its climax…

As we’ve discovered in the last few years, Star Wars fans – or at least, the incessant, insatiable trolls online who do nothing but moan, complain and threaten people who worked on entries they simply didn’t like – are the worst. So obsessed with maintaining their beloved mythos established in George Lucas’ original trilogy that they are willing to disregard Rian Johnson’s game-changer The Last Jedi to a point to where they are bullying actors like Kelly Marie Tran off of social media, they are the true dark side of the franchise.

Those same people will undoubtedly be up in arms over The Rise of Skywalker, which sees director J.J. Abrams return to finish the trilogy he began with The Force Awakens, and like The Last Jedi also does certain things that radically redefine the entire mythos, all while setting out to wrap up a nine-film saga which so many people – even the most toxic of fans – have taken so dearly to heart.

For every other sane person in the galaxy, the film is a definitive end to the Skywalker saga that’s certainly not perfect, but gets the job done two-fold with a fun, thrilling and mostly satisfying adventure with some great characters and a couple of interesting twists.

There’s not much about the plot that I want to get into without it being spoilers (so look out for a more detailed review in the coming days), but for now, I will reveal that the movie takes place a year or so after the events of The Last Jedi. The Resistance, or what little of it remains, is still fending off against the First Order, which is now led by Kylo Ren (Adam Driver) who has become obsessed with hunting down and killing Rey (Daisy Ridley). She is now training to be a Jedi under the watch of General Leia (Carrie Fisher), but when news arrives of a familiar foe making an unexpected return – again, no spoilers, even though it’s all over the trailers – Rey sets out on a mission with friends Finn (John Boyega), Poe (Oscar Isaac), Chewbacca (Joonas Suotamo), C-3PO (Anthony Daniels) and BB-8 to help rid the galaxy of this threat once and for all.

There is so much to this movie that is best left a secret until you actually watch it, so this review is just going to be a basic run-through of what works and what doesn’t. To begin with the latter, the movie tries to juggle so many things at once that it can become a little exhausting after a little while. It moves along at such a frantic speed in comparison to the previous films that you don’t often have enough time to process much of what is happening, which threatens to leave you in the lurch as you struggle to make sense of what’s going on. After a while, though, it starts to settle down and it becomes a little easier to decipher what’s what, but until then it does feel like Abrams and co-writer Chris Terrio are rushing things just so they can get to the juicier parts.

It is also one of those films that relies heavily on fan-service for its most fist-pumping moments, which is not necessarily a bad thing when it’s earned, but there are times when they feel forcibly crammed into the already busy narrative. Movies like Avengers: Endgame, which is undoubtedly fan service from beginning to end, earn those moments because there is so much weight in the story surrounding it, as well as the fact that it’s a culmination of more than twenty prior films, that they feel natural in wrapping up certain character arcs. Here, though, there are moments where it feels right for the moment, and others where it just feels like it’s there just to get a cheer from the audience. Not all of it gets the reaction they are seeking, but the ones that do are worth the ticket price alone.

On a more positive note, the film has a lot of entertainment value to it. Say what you will about Abrams as an imaginative storyteller, but he does know how to give the audience a fun time with characters we’ve come to know and love over the years, and action which can feel both grand and meaningful. Abrams has been an outspoken fan of Star Wars right from the offset, and just as he did with The Force Awakens he shows that he does indeed love this universe and its rich mythos, while also adding his own spin on things which feel as natural as they can for a series concluder such as this. There’s a lot on his plate that he needs to wrap up here, from the Skywalker lineage to several unanswered questions raised by both previous entries, and for the most part he pulls it off in ways that not everyone will agree with, but certainly feel like full-stops that most can come to terms with.

Though the movie is certainly not the perfect ending a lot of people will have hoped for – and I have a sad feeling that the discourse surrounding this film will be even uglier than it was for The Last Jedi – it serves as a fun, exciting and all around entertaining way to wrap up a saga that began more than forty years ago, and will continue living in people’s hearts for forty more, and beyond.

Star Wars: The Rise of Skywalker is bound to irritate fans who want a perfect ending to the Skywalker saga, because its frantic pace and over-reliance on fan-service leave a fair amount to be desired, but for the most part it serves as a fun, exciting and generally entertaining conclusion that wraps things up on a mostly satisfying note.

Want to decide what the movie’s like for yourself?
Check out Star Wars: The Rise of Skywalker showtimes in London
via