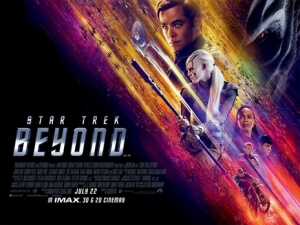 BASICALLY…: The crew of the U.S.S. Enterprise, led by Captain Kirk (Pine) find themselves up against an unknown alien threat, led by their sinister leader Krall (Elba)…

Fifty years ago, a low-budget sci-fi series with a cast of unknown actors and a wild imagination captured the hearts and minds of fans everywhere, eventually becoming the very definition of the cult TV series. Now, six television series (with a seventh on the way), thirteen movies including this one, indeterminate amounts of fan films, and at least one critically-reviled video game spin-off later, Star Trek reaches its milestone golden anniversary with hardly any signs of stopping any time soon, and if Star Trek Beyond is any indication then this series will indeed live long, and prosper.

Continuing the rebooted timeline that began with director J.J. Abrams’ widely celebrated 2009 film Star Trek, and persevered though Abrams’ far more divisive Star Trek Into Darkness, Fast and Furious franchise rejuvenator Justin Lin takes over directing duties this time since Abrams decided to do some small obscure independent film instead (something about a war? No idea…), wherein we see the crew of the USS Enterprise, captained by James T. Kirk (Chris Pine) and in the midst of their five-year voyage across the stars, answering a distress call that soon turns into a deadly and catastrophic assault on the ship. With a large chunk of the crew captured by an alien race led by its ferocious leader Krall (Idris Elba), and everyone else stranded on an unchartered planet, it’s now up to Kirk, Spock (Zachary Quinto), Uhura (Zoe Saldana), Scotty (Simon Pegg), Bones (Karl Urban), Chekov (Anton Yelchin) and Sulu (John Cho) to save everyone before things become even more disastrous.

Since this is quite an important year for Star Trek fans, the pressure will have undoubtedly been on for not just Lin but also writers Simon Pegg and Doug Jung to bring the series out of its post-Into Darkness lull and also make something that will make fans proud to be Trekkies in its 50th year, and luckily they have succeeded. To put it in Bond terms, if the 2009 film was Casino Royale, and Into Darkness was Quantum of Solace, then Beyond is undoubtedly the Star Trek equivalent of Skyfall; it’s fun, engaging, comedic, dramatic, action-heavy, character-driven, and celebratory of its fifty-year milestone without once feeling too self-satisfied.

Best of all, it’s anchored by filmmakers both in front of and behind the camera who have an absolute love for the show that started it all in 1966, ensuring that the end product feels as passionate and fresh as it was when Gene Roddenberry’s vision first made it to living rooms everywhere. Pegg and Jung’s script is particularly strong here, paying tribute to these classic characters and environments while adding their own unique spin as well, from Sulu’s blink-and-you’ll-miss-it revelation that he is in a same-sex partnership (in yet another instance of the Internet getting up in arms about something that in the end really wasn’t worth the fury) to an early revelation involving a major character throughout the entire series which causes Quinto’s Spock to reassess his priorities and question his morality. Even things we as an audience have seen multiple times over the franchise’s history, namely the Enterprise being destroyed beyond repair for the billionth time, are presented with such love and care by Pegg and Jung, and also Lin who puts his action experience from the Fast and Furious series to good use here with each set piece being a sheer thrill ride from beginning to end. More than ever, this feels like a Star Trek movie made by people who love it as much as the fans do, and they have done an outstanding job at giving people what they want to see in a Star Trek film while also making it an entertaining movie in its own right.

The ensemble cast, as they have done twice before, do such a fantastic job at preserving the legacy that their previous counterparts brought to these timeless characters while also bringing something of their own to the proceedings as well. Pine, thankfully far more engaged and interesting here than he was in The Finest Hours, is completely solid as this incarnation of Kirk and is a strong captain and leader you would follow to your dying breath, while Quinto and Urban are an effective double-act that will have you laughing in some places, and even sorrowful in others. However, aside from Pegg’s Scotty, not many of the others including Saldana’s Uhura, Cho’s Sulu or even the late Anton Yelchin’s Chekov are given as much material to work off of; that time is more spent on franchise newcomers Idris Elba and Sofia Boutella, the latter you may recall from a standout supporting role in Kingsman: The Secret Service. Elba is initially stuck with who seems to be yet another dull throwaway villain, but later revelations about his character make him more interesting than he probably is, though that may also be due to the fact that Elba is a goddamn boss in anything he does (seriously, can he just be the next Bond, already?); similarly, Boutella’s albino alien scavenger Jaylah initially starts off as another generic “strong independent female” archetype, but she’s given enough quirks and spark to make her a fully likable ally to our main heroes, all of whom work excellently off one another and bring a genuine sense of unity to a fully diverse cast.

There’s plenty of things for not just fans but general audience members to enjoy about Star Trek Beyond, from the great characters to the interesting storyline to the exciting action and effects, and plenty more things that so far this summer a lot of big blockbuster films have been sorely lacking; who says that fifty year olds don’t know how to have fun?

Star Trek Beyond is an extremely strong celebration of the franchise’s fiftieth anniversary, with writers Simon Pegg and Doug Jung bringing new effective material for these classic characters while honouring most of the past traditions, and new director Justin Lin bringing exciting action for the fantastic ensemble cast to participate in, making this an anniversary to remember.