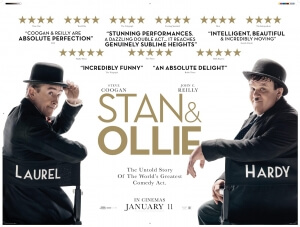 Since closing out the BFI London Film Festival back in October – a screening that I was very fortunate to attend, and write a review for – Stan & Ollie might not have gone on to become a major Oscar player like some were hoping it might, but its strong acquisition of positive reviews and a strengthened marketing campaign has given it a consciousness in the public eye, especially for those who are nostalgic for the timeless comedy of Laurel & Hardy. There are plenty of people I know who are looking forward to seeing it, mainly because it looks exactly like the kind of good crowd-pleasing movie that people enjoy watching around this time of year, not to mention that it’s starring two actors who could not be more perfectly cast as the legendary duo themselves.

The hype seems big enough that this may actually do fairly well at the UK box office (unless Mary Poppins Returns or Aquaman don’t give it the space it deserves), and seeing how Stan & Ollie is a wondrous and sweet examination of two well-adored performers in the twilight of their careers, it would not be undeserved.

We first meet both Stan Laurel (Steve Coogan) and Oliver Hardy (John C. Reilly) at the height of their power in Hollywood during the late 1930s, during an impressive one-take tracking shot following them from their dressing room on the studio lot to the set of their film Way Out West, where they are about to perform their infamous comedy dance. We then cut to sixteen years later, when the two are undertaking a UK stage tour of their greatest hits whilst waiting for financing to come together for a Robin Hood-themed movie they have lined up. The tour doesn’t go so well at first, with an unwelcome amount of empty seats within the small theatres they are booked in, but soon after doing some publicity stunts they get the crowds they so desire, with the appearance of their wives Ida (Nina Arianda) and Lucille (Shirley Henderson) also earning them some attention – but an old spat between both man as well as Ollie’s flailing health threatens to change their dynamic forever.

As you can probably already tell, my opinions on this film haven’t changed all that much from the first time I reviewed it; I still find it to be a very entertaining and heartfelt comedy-drama that should delight fans of Laurel & Hardy as well as most general audiences, comfortably directed by Jon S. Baird from a warm script by Jeff Pope, and of course two fantastic lead performances by Coogan and Reilly who, again, could not be more perfect to fill in these roles. You may be wondering, then, why there is a second review for Stan & Ollie if nothing has changed from the last time (and indeed, all of these new reviews I am doing for films I first saw last year at several festivals)? Well, with these reviews, I try and find new things to say about the films in question that I wasn’t able to say last time, which sometimes can’t be done but in other cases it can, but either way it just gives me an excuse to see (and write about) some of these great films once more, especially in the lead up to this year’s Oscars. When it comes to Stan & Ollie, there are a few notable points I would like to discuss that I didn’t even realise were worth talking about back in October.

One of those things being how the film depicts the relationship between the two men, especially during a time where things were more awkward for them than ever; both men are clearly not as close as we see them being during the opening scene, with Stan still harbouring ill feelings towards Ollie for leaving him in the lurch during a contract dispute with producer Hal Roach (Danny Huston), while Ollie is continuing to indulge his bad habits including horse-race betting. The only time when they seem to be fully engaged with each other in private is when they are developing new material for their proposed Robin Hood film, and in those moments we see glimpses of their creative dynamic that brought them fame and fortune back in the day; but outside of that, their relationship has become more one of convenience than of genuine loyalty. The arcs that both Laurel & Hardy go through in this movie are not just that of rekindling their fractured friendship, but finding a true passion for their material once more (they claim to only be doing the tour to acquire funding for their new film) that may not have been lost on audiences, but certainly has been to some extent on the men themselves. Baird’s direction, Pope’s script, and especially Coogan and Reilly’s performances all manage to show the characters’ meaningful progression from worn-out entertainers to people that learn to love each other and what they do after all is said and done, and the film boasts an enormous heart when it comes to showing how each of them approaches their friendship, and how at the end of the day they do truly care for one another. Who knows if it was truly like this in real life, but as far as the dramatization in this movie goes, it leaves you with a comforting smile on your face.

I do hope that the movie finds a sizeable audience, because it’s a charming love-letter to a timeless duo that anyone of any age can enjoy just fine, with adults appreciating the dramatic backstory and younger audience members finding themselves amused by Coogan and Reilly’s fun re-enactments of Laurel & Hardy’s material. I’d be very interested to hear what people think of this once they get a chance to see it, and with luck it’ll be another fine (non)mess they’ve gotten themselves into.

Stan & Ollie is a charming and sweet look at the lives of Stan Laurel and Oliver Hardy in the twilight of their careers, with Jon S. Baird’s calm and posed direction, Jeff Pope’s simplistic and warm script, and Steve Coogan and John C. Reilly’s near-perfect performances as the comedy duo carrying the film to a satisfying and heartfelt conclusion.