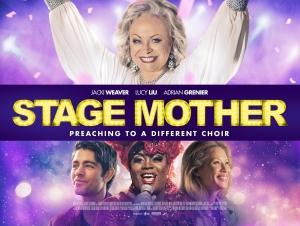 As the world succumbs to misery, cynicism and hatred, we desperately need something to cheer us up, even if it’s only for an hour and a half of our day.

Stage Mother might not be on the same level of quality as other feel-good crowd-pleasers like Pride or The Full Monty, but it’s a start nonetheless, and it does leave you with a light, happy feeling that feels all too rare these days.

The film is about Maybelline Metcalf (Jacki Weaver), a church choir director in a small, and very conservative, Texas town. One day, she receives some devastating news: her only son, Ricky (Eldon Thiele) – who she reluctantly disowned after he came out as gay – has suffered a fatal overdose in San Francisco. Heading there for his funeral, she discovers that she was his next of kin, and has thus been bequeathed the drag club that he ran, much to the chagrin of Ricky’s partner Nathan (Adrian Grenier). The club appears to be on its last legs financially, but Maybelline, who is eager to atone for her past dismissals of her late son’s lifestyle, resolves to turn things around by giving the club a fresh new look, and encouraging its performers to put more effort into their acts, which soon makes it a much more positive experience for everyone.

As far as feel-good movies go, this is one that ultimately serves its purpose, and gladly bows out of going any deeper than that. At the same time, though, it doesn’t feel entirely cynical; it does have a lot of heart to it, and you can tell that the filmmakers and actors went into this with good intentions in the way it’s both performed and shot. It is simplistic to a fault, following the particular guidelines of this formula down to a tee, but the general likability of these characters (well, most of them anyway, but more on that later) and the genuine approach which doesn’t feel too forced does elevate some of the more glaring flaws in the script and parts of the filmmaking.

Namely, the movie has some very bizarre editing at certain moments; scenes will suddenly come to an abrupt end, sometimes in the middle of what should be a much more interesting conversation, and a couple of music and title cues aren’t synched up as well as they probably should be, making it a little awkward to fully digest. The bigger flaws lie in the script, though, especially with how underwritten or overly infallible it writes some of these characters. At first, you do sympathise with Maybelline’s character, largely because Jacki Weaver does give her an instant dose of humanity instead of playing it more stereotypically, but as the film goes on and she starts helping people overcome their drug addiction, rekindle relationships with disappointed parents, and even saves them from a spot of abuse in the bedroom, you start to realise that she is pretty much indestructible. In each one of these scenarios, where the film tends to overplay its white saviour card far too often, she easily comes out on top, with barely any repercussions or later consequences, which does result in there being some fairly low stakes and miniscule conflict for the sake of drama.

However, despite the infallible nature that the writers have bestowed upon her, the character and the performance is very likeable and easily carries this movie – which is a lot more than I can say about the Nathan character, played by Entourage alumni Adrian Grenier. Here’s a character who should be extremely easy to make sympathetic; he has just lost his lover, he is facing so much financial scrutiny with his failing business that he is preparing to move out of the apartment he shared with his partner, and he is struggling to accept into his life a person he was told had nothing but disdain for their son’s sexual identity. Unfortunately, Grenier is not a charismatic enough actor to pull any of that off, and he mostly comes across as a smug douchebag who takes every available opportunity to treat Maybelline – who despite her past opinions genuinely does seem to want to help make things right – like utter trash, even when it’s entirely uncalled for (which is more often than you’d think). By the time he does come around to her – very suddenly, as though there was no natural transition whatsoever – it’s far beyond the point where you care about this guy, because he’s been nothing but a condescending and verbally abusive prick to her and others the whole time, which almost makes it seem out of character when he eventually does lighten up.

Make no mistake, this is a flawed film, but in the end what matters is how it makes you feel upon leaving the auditorium, and honestly I left this movie feeling rather uplifted. Despite the way it treats some of its characters, a majority of them are likeable enough for you to want to see succeed, and the overall vibes you get whenever it performs a hearty musical number are fun and jaunty. It’s also a movie that makes a rather compelling use of Lucy Liu, who has a major supporting role as the free-spirited single mother who Maybelline crashes with, and who steals most of her scenes with a fun and intriguing turn which the movie doesn’t shine too much light on, sadly. It isn’t setting out to be the next big awards-favourite or anything, but instead it seeks to warm as many hearts as it can, and in these unsettling times a little warmth is all we could ask for.

Stage Mother is a likeable and genuinely feel-good crowd-pleaser, which might not be as top quality as other films in that category – some awkward editing choices and a couple of character development issues hinder it somewhat – but has a warm enough heart to carry itself through, which in these unsettling times is all we could ask for.

Want to decide what the movie’s like for yourself?
Check out Stage Mother showtimes in London
via