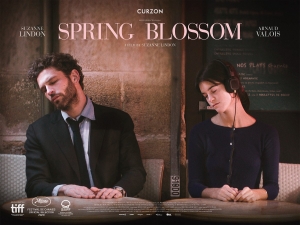 BASICALLY…: A teenager (Lindon) develops a fascination with an older man (Valois)…

Simply astonishing is the fact that director, writer and star Suzanne Lindon, making her debut in all three categories with Spring Blossom, wrote the script when she was 15, and then made and distributed the film before she even turned 20. If you had no idea going in that this movie was entirely the work of a filmmaker not just blossoming into the profession but doing so well in advance of her slightly older peers, there’s very little to the complete film that suggests it’s the work of someone with very little experience.

It is a competently made film, with its stylistic choices and occasionally abstract direction promising grand things in Lindon’s future career, though it’s easy to see right through the overall story as the slight, inconsequential narrative ultimately amounts to very little.

In the film, Lindon stars as Suzanne (such a stretch), a 16-year-old girl living in Paris with her family, but at school she struggles to fit in with her fellow teens, who she considers a rather dull crowd with their narrow-minded views and typical adolescent behaviour. She slowly becomes more and more fascinated with an older man named Raphaël (Arnaud Valois), a 32-year-old actor who’s performing a play at the small theatre that Suzanne passes every morning, and who himself is feeling rather bored with his profession, the small acting troupe he’s working with, and the nonsensical direction he’s given (at one point, he’s asked to resemble a tree in a scene he’s not even in). When the two of them eventually cross paths, a mutual attraction settles in, and Suzanne finds herself in the firm grip of her first, proper crush.

One of the ways in which filmmaker Lindon avoids trudging down familiar paths is by keeping the central relationship, which otherwise might have leaned far too heavily into the clear sexual tension between this young girl and her potential statutory predator, impossibly muted. There are certainly some sparks flying between the two, but Lindon steers clear of diving too deep into problematic territory by showing only the sensible, slightly awkward encounters that a teen girl might realistically get herself into without having to go any further. The closest that her movie comes to full-on sex scenes in this otherwise PG-rated film are a couple of surreal dance sequences that both Lindon and Valois perform together, where a choral Vivaldi track causes both of them to slowly dance in almost-perfectly synchronised choreography; hypnotically performed, there’s a lot that can be read into these moments of subtle ecstasy that a normal, vanilla display of physical intimacy might not have been able to achieve. In addition, Lindon shows a strong eye for downplayed visuals that hint at her character’s growing lust for the older man, such as close-ups of him eating bread and jam at a local café, and long uninterrupted shots of the two of them simply slow-dancing together as tears form in the eyes of at least one of them.

As a director, she definitely has a number of strengths that are promising for her future; however, where she falters somewhat is a script which cannot help but feel all too light and even safe. This is the kind of script where, despite a firm central hook, there’s really not much else going on to give it some extra weight; you can describe everything that happens in this movie from start to finish in under thirty seconds, without missing any important information or neglecting any major character development or even motivation. Spring Blossom is a quick (coming in at 73 minutes) and largely inconsequential film that merely skims the surface of some of its racier topics, and ends on a note that simply leaves you pondering what the point of the entire thing was. While it’s applaudable that Lindon was determined not to have her film go down a more familiar path with this kind of story, it’s ultimately one that perhaps could have used a bit more than what it has, because then it wouldn’t feel like an all-too-slight collection of meaningful glances between these two people.

It’s easy to see what Lindon’s intent was, to capture what it must be like to go through a fleeting schoolgirl crush that very quickly becomes obsolete as she slightly matures, and for some that may very well be enough to carry them through. Personally, while I felt that overall this is a strong enough start for someone very much making their filmmaking debut – especially at such a young age compared to most other first-time filmmakers – there are still improvements to be made in the creative field that should put a little more meat on its bones, because even some of the more niche audiences may still want a little more than a couple of surreal dance sequences.

Overall, it’s a strong start, but it’s a long way from the finish line.

Spring Blossom represents an impressive first feature for young filmmaker and lead actress Suzanne Lindon, who shows great directorial and acting promise but settles for a very slight, inoffensive script that merely skims the surface of some of its racier topics, despite the admirable effort to avoid familiarity.