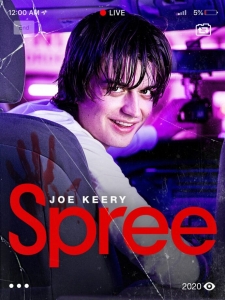 BASICALLY…: A fame-hungry driver (Keery) fixes cameras inside his car to live-stream an increasingly dangerous attempt to become popular…

As if it needed to be said in the first place, but social media is both a blessing and a curse in our modern society. On the one hand, it’s connected people around the world like never before, sharing similar interests and breaking news stories faster than anyone could ever have predicted half a century ago; however, it has also led some people to live shallow and noticeably empty lives, from sending nasty troll comments to people and properties they don’t like, to endlessly posting useless videos and images in vain attempts to build their influencer profile.

It’s a truth that most of us with common sense has acknowledged and accepted by now, so when a film like Spree comes along and tries to provoke audiences with that exact message, it doesn’t come as quite a big of a shock because we already know about it. However, what Spree lacks in true originality or exceptionally sharp commentary, it more than makes up for with a huge entertainment factor, boosted in part by a brilliantly psychotic lead performance from Stranger Things break-out Joe Keery.

The man many of you know as Steve Harrington on that Netflix show, plays Kurt Kunkle, a lonely young man who works as a driver for the Uber-like app Spree, but more importantly is eager to achieve fame and notoriety online, shown through his regular posting of useless videos on his “Kurt’s World” channel which barely make it to double digit views. He finally comes up with a concept that is sure to get him internet fame at last: calling his scheme “#thelesson”, he installs several live-streaming cameras in his car, and picks up several passengers during his day. However, his scheme is revealed to be a lot deadlier than it seems, as he’s poisoned the passenger’s water bottles and lets them die for the world to see, and as the day goes by his plans get a lot bloodier and far more out of control.

It is very much a pitch-black comedy, which at first sets its sights on easy targets such as white supremacists and sexist douchebags, but very quickly devolves into a slasher free-for-all, where nobody is safe from Kurt’s sinister plot, not even rising stand-up comedian Jessie (Sasheer Zamata) who has the misfortune of being his primary target after he learns of her immense online following. The concept itself is fun enough, and the fact that it’s all shown through phone screens and live-streaming cameras – not dissimilar to films like Unfriended or Searching, or even the recent horror breakout hit Host – is a neat touch which makes the film feel a little more authentic. Holding it all together is undoubtedly Joe Keery, who is clearly having a blast as the deranged hybrid of Patrick Bateman from American Psycho and Louis Bloom from Nightcrawler, getting some awkward laughs out of his character’s chirpy but blatantly self-marketing persona, and he has an intimidating screen presence that can occasionally send shivers down your spine. He can be creepy and sociopathic, but also eerily confident as his viewer numbers start to go up, which Keery successfully morphs into a monster of the modern age.

The rest of the movie, while highly entertaining for most of it, does struggle to reach the heights of its lead performance. The overall message about the shallowness and vapid nature of social media is about as subtle as a drill to the head, because again it is a message that most of us have fully received by now, and it doesn’t have a whole lot else to say about it that many others hadn’t previously considered. Admittedly, it’s a far more engaging and entertaining look at the influence of social media than Infamous was, because at least this film has a sense of humour about itself; however, the satire is blatant and obvious, showing several extreme examples of the worst kinds of social media personalities from vapid DJs to vloggers who stage meaningful acts of kindness, and not doing a whole lot to expand on its criticisms of them other than they are phoney narcissists. The film oddly feels as empty as the people it’s setting out to mock, though one could argue that’s kind of the point, seeing how the main character is so desperate to become internet famous that he has adopted several mannerisms that only soulless creators could embody. Either way, the satire doesn’t land as swiftly as it probably should.

Nevertheless, this was an entertaining sit in the same way that Unhinged was; sure, it’s not the deepest or even the smartest film you could be seeing in cinemas right now, but it’s a fun enough ride – albeit in the darkest of senses – to keep you hooked until the final few moments, largely in thanks to a bombastic and wildly insane central performance who keeps everything glued together. It doesn’t completely work, and will undoubtedly turn some people off with its heavy nihilistic viewpoint and nasty death scenes, but for my money this was a mindless bit of exploitation fun that makes me a lot more interested in seeing what Joe Keery can do outside of his Steve Harrington persona (other than the in-development fourth season of Stranger Things, he’s due to appear in Ryan Reynolds’ Free Guy, currently scheduled for December this year), because if nothing else the guy can do crazy and off-the-rails extremely well.

Spree is a mindlessly fun bit of exploitation, which manages to stay mostly entertaining throughout, even when its satirical takedown of the shallowness of social media doesn’t land as well as it wants to, with an exceptionally watchable lead performance by Stranger Things’ Joe Keery who dials up the crazy in his own take on the likes of Patrick Bateman and shines greatly because of it.

Want to decide what the movie’s like for yourself?
Check out Spree showtimes in London
via