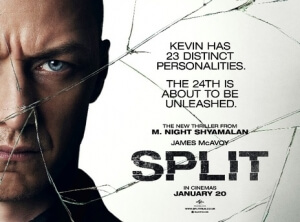 BASICALLY…: Three teenage girls are abducted and held captive by a man named Kevin (McAvoy), who has 23 different personalities inhabiting his body…

People are already declaring M. Night Shyamalan’s long period of lacklustre entertainment to be over, after 2015’s The Visit surprised even the most cynical of the filmmaker’s work with its tongue-in-cheek approach and (intentionally) humorous occurrences. But what some of them probably fail to recognise is that Shyamalan, even when he was making good stuff like The Sixth Sense and Unbreakable, has always been batshit insane with his ideas and unconventional directing and writing style. With one crazy idea after another, from a young child seeing ghosts everywhere, to alien invaders being easily thwarted by wood and water (two of the planet’s most viable resources), to thinking that adapting an entire series of an acclaimed Nickelodeon animated show is at all a good idea, Shyamalan has always been aloof; the difference is, when he does it well it can be quite affecting, and when he doesn’t it’s unintentional comedy gold.

His latest film, Split, is a healthy mixture of both these things; at times pretty creepy, and at others pretty damn funny, even when it clearly isn’t Shyamalan’s intention. But all at once, it is a completely insane collection of ideas and executions that make it worthwhile entertainment.

The film centres around a man named Kevin (James McAvoy), who has dissociative identity disorder (DID) and has 23 different personalities inhabiting his body. At the start of the film, he kidnaps three teenage girls, including Casey (Anya Taylor-Joy), Claire (Haley Lu Richardson) and Marcia (Jessica Sula), and holds them in an underground basement for reasons that are not yet clear. The girls soon meet Kevin’s several different personalities, including a stern spectacled man, an elegant and well-spoken female, and an eccentric nine-year-old boy, who all apparently believe that a 24th and far more dangerous personality, known as “The Beast”, is about to emerge from Kevin’s fractured psyche, and do something horrible to the girls, unless they can escape first.

Shyamalan keeps the action mostly contained, save for a few segments where Kevin, as a camp fashion designer persona, visits a therapist played by Betty Buckley, whom Shyamalan fans will remember as the crazy old lady from The Happening. There’s nothing crazy about her performance this time round (sadly), but luckily Shyamalan keeps the insanity at a persistent flow whenever McAvoy is on-screen as his multiple different characters. It’s an actor’s wet dream to play this many characters in the same movie, all with their own distinct quirks and identifiable differences, but in this case McAvoy has the extra advantage of being stuck with a Shyamalan script, which as we all know by this point has its own style and substance that’s unlike any other filmmaker’s, with its long-winded dialogue and characters that don’t seem to act entirely human. This type of direction and writing may have hindered actors in the past like Mark Wahlberg, Will Smith and Joaquin Phoenix among others, but McAvoy somehow has found a way to use that awkwardness to his advantage, and as a result delivers a multi-layered performance that perfectly realises Shyamalan’s vision of the character(s) being awkward yet also extremely frightening at the same time. McAvoy is clearly having the time of his life as he’s trying to bring to life yet another odd screenplay by the filmmaker, whilst also making it entirely his own thing, and it works surprisingly well in the actor’s favour as well as the audience’s, as this is easily one of his most entertaining performances in quite some time, and he is easily the highlight of the entire film from start to finish.

It’s handy that McAvoy’s as good as he is here, because while the rest of the film may not be as completely bonkers as its lead performance, it’s still got the usual Shyamalan trademarks which are already pretty out there. As stated earlier, the script is littered with unconventional dialogue that doesn’t sound entirely like it was written by human hands, the direction still conjures up one or two awkward performances, even though on the whole this is one of his better-acted films in recent years, and although there is early promise of a ground-breaking twist as there is in most if not all of Shyamalan’s previous films, the film doesn’t quite deliver on these expectations. It’s an odd viewing experience, as you start off with being given strong hints that somehow Anya Taylor-Joy’s character is tied into McAvoy’s character(s), and as the film goes on those hints start to become more and more prominent, leaving you waiting for the ultimate payoff. But then, without giving much away, that payoff never really arrives and things just happen exactly as you more or less expect it to. Maybe the twist is actually the fact that there isn’t really a twist after all, at least not in the same way that the one in The Sixth Sense was a twist (though don’t leave the cinema as soon as the end credits start – there’s one last surprise that will have Shyamalan fans shocked as well as thoroughly curious about what comes next).

That being said, the film is never boring, and admittedly it does hold your interest firmly until the very end (even if it doesn’t entirely meet expectations), mainly thanks to a reliably insane script and direction by Shyalaman, and an endlessly entertaining turn by McAvoy who manages to be intimidating, funny (just wait until his kid persona busts out his dance moves), and absolutely terrifying all in the same movie. He is, like the movie Split itself, completely and utterly bonkers.

Split will leave fans of M. Night Shyamalan – both ironic and un-ironic – mostly satisfied, as there is plenty of meat to chew off with its insane ideas and executions, although it is admittedly one of his most genuinely entertaining films in quite some time, helped by an extremely entertaining turn by James McAvoy, who fully embraces the oddness of his director in glorious ways.