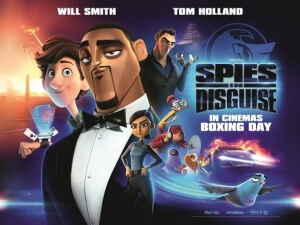 You have to hand it to Blue Sky Studios, who have somehow managed to find a way to make even their big and ambitious ode to spy movies be about a talking animal.

The animation company, recently acquired by Disney as part of its purchase of 20th Century Fox, might be known best for the Ice Age movies, but many of their other films outside their signature franchise don’t stretch too far beyond having animals as their main characters, from the Rio movies to Ferdinand, and even its best movie to date – The Peanuts Movie – heavily featured Snoopy the beagle in one of the leading roles. Perhaps it’s par for the course that the studio is now owned by Disney, the king of animated films about talking creatures with celebrity voiceovers.

The trend doesn’t buck with Spies In Disguise, because while at first it might seem like a fun and reasonably entertaining spy flick – albeit one that families can easily enjoy – it’s not long before we get Will Smith voicing a pigeon.

A bit of context perhaps helps; Smith plays Lance Sterling, a secret agent who’s very good at what he does but, predictably, prefers to work alone. On the other end of the line, there’s Walter (Tom Holland), a young genius inventor hired by the same agency as Sterling to invent new gadgets to assist the secret agent on his missions, but Walter would rather invent less lethal weapons like glitter bombs and protective inflatables because he feels there are other ways to fight evil than violence. However, when Sterling is framed for stealing a deadly weapon, he is forced to turn to Walter to help make him disappear – which he does, but only after he accidentally drinks a serum that turns him into a pigeon. Now, the two must team up for a globe-spanning mission to find the true culprit and save the day, all while Sterling figures out how he’s going to be the hero in his new feathered body.

It doesn’t take a secret agent to uncover where things go from there, since it sticks to familiar patterns that other animated films like The Emperor’s New Groove and even Blue Sky’s own Rio have helped to saturate. According to the credits, the film is based (very loosely, apparently, if its IMDb page is anything to go by) on a short film called Pigeon: Impossible, and there are parts where the story feels so basic and the jokes rather obvious that it leads one to wonder if this concept would have worked a little better as a short, or a series of shorts, than a feature. Then again, a short probably wouldn’t have had the budget to be quite as fast-paced and energetic in its animation, let alone hiring big-name actors like Will Smith and Tom Holland to voice the two lead roles, and to the film’s credit it is animated in a way where it definitely feels lively, especially when it delivers the action. There’s an opening action scene which is very well animated – and even comes complete with its own Bond-style opening credit sequence – and in those moments the film does hint at having legitimate thrills for a family audience to digest. Other times, though, it can get exhausting as the slapstick is laid on thick and fast, with barely enough time to breathe in between. Most of the time, though, it works, and is the part where the film shines best.

When it has to be a family film, though, it is held back by the familiar tropes. The story and character arcs are very standard and don’t deviate enough from the path, making it a slightly more action-packed version of stuff we’ve seen so many times before. The script gives you all of the landmarks for an animated film about two mismatched characters forced to travel together and bond along the way, and either plays them straight or in ways that don’t make itself stand out from so many of the other films like this. Its heart is certainly in the right place, but it doesn’t make the film any less generic.

As for the voice work, although Smith and Holland is certainly on track, many of the other big names roped in to provide vocals – from Rashida Jones to Rachel Brosnahan to Karen Gillan to, of all people, Reba McEntire as the agency’s director – are pretty much wasted on smaller parts that really could have been played by anyone. That especially rings true with Ben Mendelsohn as the film’s villain, who is just another stock villain that they’ve brought the traditionally menacing Australian actor to play, and whose motivation is sketchy at best, because we don’t spend enough time with him to figure out what exactly his deal is. All we’re supposed to get from his character is that he’s evil, and even then it feels like it’s largely because Ben Mendelsohn – an actor who’s more than accustomed to a villain role by now – is voicing him.

Overall, the movie isn’t bad, but it doesn’t feel like there’s enough for it to really stand out, aside from some of the fun and surprisingly brutal action (there is one where a major character inflicts bruises on his face during a moment of slapstick, and they are still there for a short while afterwards). If you’re looking for something to put on for your kids, then I suppose this isn’t going to inflict any harm upon them; as a family outing, though, you’re probably better off with Star Wars or Jumanji which are still playing.

But at least it’s light-years ahead of StarDog and TurboCat, I’ll give it that.

Spies In Disguise has moments of fun and flashy spy action, helped by the charisma of Will Smith’s vocal performance, but it can’t escape the formulaic trappings of a standard family film which prevent it from being a real stand-out.

Want to decide what the movie’s like for yourself?
Check out Spies In Disguise showtimes in London
via