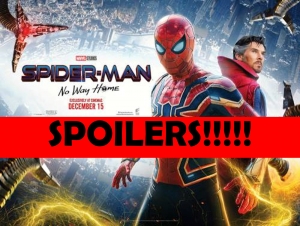 BASICALLY…: In an attempt to make everyone forget his secret identity as Spider-Man, Peter Parker (Holland) ends up unleashing enemies from across the multiverse…

WARNING: THIS REVIEW CONTAINS MAJOR SPOILERS FOR SPIDER-MAN: NO WAY HOME – IF YOU WANT TO GO IN KNOWING AS LITTLE AS POSSIBLE, STOP RIGHT NOW AND READ OUR SPOILER-FREE REVIEW RIGHT HERE.

Welcome back, Tobey and Andrew. Yes, in what has to have been the worst-kept secret in the MCU since the return of the snapped heroes in Avengers: Endgame, the two former live-action Spider-Men made their triumphant returns in the third act of Spider-Man: No Way Home, to help out Tom Holland’s version after the devastating loss of Marisa Tomei’s Aunt May (but not before she delivers the all-important “with great power comes great responsibility” speech). It’s what audiences have been wanting ever since the news broke that this film would dive into the multiverse, with villains from their respective universes being confirmed to appear as well from Alfred Molina’s Doc Ock to Jamie Foxx’s Electro, and honestly it could not have been better pulled off. The reactions from audiences when Garfield and then Maguire make their refreshingly casual big entrances should tell you all you need to know about how special such a moment is for everyone, because these are actors that most people grew up with as far back as 2002, and to see them playing off one another on-screen for the first time is an exceptionally special treat for long-time Spider-Man fans who have been there from the beginning of his live-action cinematic adventures.

While the return of Tobey Maguire and Andrew Garfield will almost certainly be the biggest thing that people take away from this movie, it’s important to remember that No Way Home is also a monumental event for Tom Holland’s Peter Parker as well. For the first time in his MCU iteration, Peter has managed to evolve from simply being the wide-eyed ingenue to experiencing truly personal loss, making noble sacrifices, and learning what it is to be a true hero – in other words, Peter Parker has finally become Spider-Man. As the appearances of Maguire and Garfield remind us, the hero’s journey doesn’t begin when he puts on the suit, or even when he’s bitten by that radioactive spider, but when he understands the true weight of being a public figure that is expected to help out when trouble arises. In the case of Holland’s Peter, it’s the direct impact of Aunt May’s tragic death, and most notably the climactic decision to make everyone in the world forget who he is, including his girlfriend MJ (Zendaya) and his best friend Ned (Jacob Batalon); in these moments, you can sense that the kid who saw Tony Stark as a mentor/father figure is long gone, and in his place is a young man who now knows why, as long as he embraces his superhero alter-ego, living a normal life is simply out of the question. That is fundamentally who Spider-Man is, at least in the realm of film, and this entire MCU trilogy has been a rather clever way of naturally working towards that evolution, while also being rather entertaining chapters in and of themselves, with No Way Home arguably being the most satisfying.

However, what makes this film so much more compelling and thought-provoking is what it does with its roster of classic villains. Instead of sending them back to their respective universes so they can die while fighting Spider-Man, our Peter instead chooses to defy Doctor Strange (Benedict Cumberbatch, playing the “annoyed veteran” part eerily well) and attempts to fix their numerous problems, such as replacing Doc Ock’s fried brain chip, and creating an anti-serum that will eliminate the psychotic alter-ego of Willem Dafoe’s Norman Osborn (who, by the way, is just as delightfully evil as he was nearly 20 years ago). This noble act ties into how this whole film really is about second chances, the kind that we would bestow upon those who would not have been given them in their previous circumstances, and you can see how moved some of them are to actually have someone who is, for the first time, trying to help them instead of defeating them at face value. It also extends to the heroes, with Andrew Garfield getting another chance to save someone from a fatal fall after his notorious failure with Gwen Stacy, and even Tobey Maguire being able to reconcile with old faces like a reformed Dr. Otto Octavius during the big climax at the Statue of Liberty (which, as Holland’s Peter blatantly points out, is somewhere that greatly represents second chances). In a way, this is Spider-Man at his most heroic, not in defeating the numerous baddies in one fell swoop, but by giving them an opportunity to restore their humanity before their corruption, which just shows what a caring and empathetic hero he is amongst Marvel’s hero line-up.

There’s so much else to get into in this spoiler-heavy review, from the brief cameo of Charlie Cox as Matt Murdock (which, between that and Vincent D’Onofrio’s Kingpin returning in Hawkeye, is a great gesture for Daredevil fans everywhere), to this universe’s J. Jonah Jameson (as ever played by J.K. Simmons) basically being a lampoon of Alex Jones and his radical conspiracy ramblings, to the mid-credit scene where Tom Hardy’s Eddie Brock/Venom is drunkenly trying to piece together the MCU before unceremoniously being transported back to his universe (which, contrary to what might be implied, does seem like a slight cop-out after the shocking reveal at the end of Venom: Let There Be Carnage). However, it’s really the fundamental notions that I wanted to really analyse here, and to see how it all helps make Spider-Man: No Way Home a truly special Marvel movie, but more importantly an absolutely essential Spider-Man movie, for this really is – again, for the first time in the MCU – that our friendly neighbourhood Spider-Man has truly learned exactly what it is that comes with great power.

Spider-Man: No Way Home is great for all the reasons laid out in the spoiler-free review, with the return of both Tobey Maguire and Andrew Garfield as their respective Spider-Men, as well as the noble themes of second chances and the ultimate development of Tom Holland’s rendition, making it all the more amazing.

Spider-Man: No Way Home is now showing in cinemas nationwide – click here to find a screening near you!