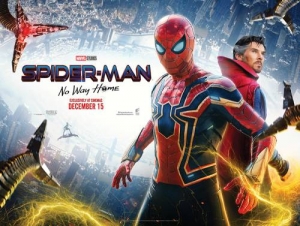 BASICALLY…: In an attempt to make everyone forget his secret identity as Spider-Man, Peter Parker (Holland) ends up unleashing enemies from across the multiverse…

There has never been a Spider-Man movie – or hell, a Marvel movie in general, at least since Avengers: Endgame – as heavily speculated as Spider-Man: No Way Home. Since the day it was announced that the likes of Alfred Molina and Jamie Foxx were part of the cast not as new MCU characters but as the baddies they once portrayed during past cinematic iterations of the famed web-slinger, followed by the inclusion of Benedict Cumberbatch reprising his role as reality-bending Doctor Strange, rumours of a live-action Spider-Verse have been in rapid circulation. Now that the movie is finally out, you’re all probably clamouring for answers to some of the big questions, such as “will somebody finally tell Peter Parker what comes with great power?” and especially “are THEY in it?”, but in all honesty I don’t really want to answer those right now – which is why you can expect another, much more spoiler-ific review coming soon, in order to give yourselves a chance to actually see it before having certain details about it ruined.

This spoiler-free review, on the other hand, will just be focusing on the most important question of all: is the movie actually good? The answer is a resounding, gleeful “yes”, for not only is Spider-Man: No Way Home the finest outing yet for the MCU iteration, but in terms of Spider-Man movies in general this is an absolute goldmine for long-time fans of the web-slinger’s cinematic adventures.

Regarding the plot, only confirmed details will be included here, such as the movie picking up immediately where the mid-credits stinger for Spider-Man: Far From Home left off when, in a shock twist, that movie’s villain Mysterio not only framed Peter Parker (Tom Holland) for his villainous acts, but also outed Parker’s identity as Spider-Man to the world. The public backlash is both immediate and scornful for Parker, his girlfriend MJ (Zendaya), best friend Ned (Jacob Batalon) and his Aunt May (Marisa Tomei), so much so that Peter decides to approach none other than Doctor Strange (Cumberbatch) in order to conjure a spell that would make the whole world forget his secret identity. However, the spell goes awry and starts bringing in foes from different universes, including Dr. Otto Octavius/Doctor Octopus (Molina), Max Dillon/Electro (Foxx) and Norman Osborn/Green Goblin (Willem Dafoe), which Peter and Strange must now deal with in order to prevent the multiverse from tearing up all fabrics of reality.

The film displays a different kind of ambition than Marvel’s most recent, much more divisive entry Eternals was, for it is the first in the MCU film line-up (not counting Disney+ shows like Loki and What If…?) to properly tease the infinite realm of the multiverse, which contains so much storytelling potential that it’s hard to know where to begin. All of that, while also keeping it focused on Holland’s Parker and his established allies from the previous two Spider-Man movies, and rounding up any character or story arcs that may have begun back in Spider-Man: Homecoming. It’s a lot to juggle, but thankfully director Jon Watts and writers Chris McKenna and Erik Sommers are more than up for the task, showing a much more mystical side to Spider-Man’s story while also maintaining the reasonably down-to-earth and plucky sense of humour that his previous movies had set up, all while actually having a lot of fun with its heavy concepts. Watts is a director who has shown throughout all three of these films that he really understands the heart and soul of this character, and even if you’ve not been a huge fan of Spider-Man’s depiction in the MCU thus far, there are things he does in this movie which are among the most noble and selfless attributes that any big-screen version of Spider-Man has yet done. For the first time, we see Spider-Man actually become Spider-Man.

Ultimately, the movie is a major love-letter to the character and legacy of Spider-Man in general, not only returning to some of the most iconic villains in the character’s multiverse-spanning roster of baddies, but celebrating the character’s beating heart and inspiring heroism. Holland’s iteration has really brought that to the forefront across all his MCU appearances thus far, displaying an arc that has him maturing from wide-eyed high-schooler to responsible young man with weight on his shoulders, but not so much that he ever becomes disillusioned from helping those in need. Spider-Man: No Way Home is a formidable conclusion to this arc, and Holland as well as director Watts have done such an admirable job of displaying these youthful themes with both a strong sense of humour and a great amount of charm and heart that has really stood out from other versions of the character. There’s a reason why Holland has become such a major movie star after his MCU debut, because he is an actor who has it all from the physical agility to the screen presence to the youthful looks of a younger Leonardo DiCaprio, and as Peter Parker he has breathed new life into a character that, at the time, desperately needed a fresh new take while also making it very much his own.

As for how it all ties into the legacy of Spider-Man? Again, that’s what the upcoming spoiler-heavy review is for.

Hopefully, this spoiler-free review isn’t vague enough to convey that this really is an exceedingly entertaining and sometimes joyous movie, one that celebrates not only the big-screen legacy of the classic Marvel hero, but also the true boldness of Spider-Man’s overall personality, while also concluding established story and character arcs with great emotional power and, yes, even greater responsibility. For lovers of Spider-Man, even at his weakest, there’s plenty to love and enjoy for just about anyone who’s ever wanted to meet that friendly neighbourhood Spider-Man.

Spider-Man: No Way Home is a hugely entertaining conclusion to the character’s current MCU arc, celebrating both the character’s on-screen legacy and his overall heroic nature in a plot that is sure to delight everyone who has ever seen a Spider-Man movie.

Spider-Man: No Way Home is now showing in cinemas nationwide – click here to find a screening near you!