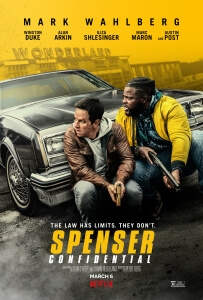 BASICALLY…: An ex-cop (Wahlberg) teams up with his new roommate (Duke) to investigate the murder of some former colleagues…

That damned coronavirus strikes again; due to its ongoing severity, it’s been advised that we should all avoid going to public places like cinemas, which really puts someone in my line of work in a tight position because I rely on regular cinema trips for website content.

Luckily, there’s a whole bunch of options on several streaming services as well as VOD that are ripe for picking, and so as we wait to finally visit the cinema again we’ll be taking a look at several films recently made available on those platforms – and we’re starting off with WahlBerg’s heartfelt apology for Mile 22.

WahlBerg – comprised of star Mark Wahlberg and director Peter Berg – are now on their fifth collaboration together, having previously had successes with Lone Survivor, Deepwater Horizon and Patriots Day, but their previous film Mile 22 was not only their worst to date but it did the opposite of what it set out to do and cast neither star nor director in a particularly good light. Luckily, Spenser Confidential – the latest attempt to adapt author Robert B. Parker’s private eye character onto screens, following a television series and several made-for-TV movies – is a million times more tolerable than the previous WahlBerg collab, but a frustratingly straightforward script keeps it from being as good as some of their other films together.

We are first introduced to Spenser (Wahlberg), a former Boston cop, as he is about to leave prison after serving a five-year sentence for assaulting police captain Boylan (Michael Gaston) when he was discovered to have beaten his wife. Once out, he’s taken in old acquaintance Henry (Alan Arkin) who introduces him to his new roommate Hawk (Winston Duke), but before Spenser can leave Boston for good and start a new life in Arizona, news comes in that Boylan and another officer have been found dead, with the latter being accused of murdering Boylan. Suspecting someone else is behind the hit, Spenser uses his skills to investigate who the truly guilty party is, and he relies on the help of Hawk, Henry, and even his ex-girlfriend Cissy (Iliza Shlesinger) to solve the case.

If you’re a fan of the Spenser character and are curious to see how this film stays faithful to how Parker originally wrote him, I couldn’t tell you because not only have I not read any of the stories, but I didn’t even know he was originally a literary character until I first heard about this movie. I can only go by what this film offers, and with that in mind I found this to be a fairly entertaining ride with an enjoyable lead character; it’s always fun seeing Wahlberg flaunt his tough-guy persona while also showing his softer, more vulnerable side, and he brings that same energy to this part too, with his Spenser certainly having some bad-ass moments but also ones that make him feel extremely human. For one, this guy gets beaten up quite badly multiple times during this movie – even by a psychotic guard dog in one humorous scene – and the film makes it no secret about how much of a beating he’s taking, not to mention how much it hurts. It’s refreshing to see Wahlberg play a character who by all accounts isn’t a traditional action hero, and he has enough charisma and a sense of humour to easily get by, though again I don’t know if this is an accurate representation of the character as he was originally portrayed; I’m just going by what WahlBerg envision this character to be, and it’s not a bad one in my book.

Berg directs the film with a fair level of suspense and light-hearted humour, with the action scenes being well-choreographed and relatively easy to make out. He even finds time for other actors than Wahlberg to shine, particularly Winston Duke who gets some pretty memorable lines and moments to add to his increasingly flexible filmography, as well as Iliza Shlesinger who pops up every now and then as Spenser’s no-nonsense ex-girlfriend but leaves a fairly sizeable impact, and even Post Malone is in it for a couple of scenes but makes the most of them. The characters all work off of each other nicely, and there are decent parts of the script – co-written by Brian Helgeland, the Oscar-winning writer behind L.A. Confidential – where they are allowed to just breathe and actually be normal people (at least, as normal as their larger-than-life personalities allow them to be).

It is in said script, however, where things don’t always work as well as they should. The plot they’ve chosen to go with here is an extremely generic one, where you can tell just about every major plot twist as soon as it is introduced, especially with certain characters who you can almost immediately tell are not to be trusted. It leaves you frustrated throughout most of it, as you are just waiting for the main characters to catch up with you when you’ve figured out who’s involved ages ago, and if this script took a few more chances and added some genuinely surprising turns that made things a whole lot more interesting, then maybe this could have been one of WahlBerg’s stronger collaborations.

Instead, it’ll have to settle for being one of their more middle-of-the-road ones.

Spenser Confidential has some strong qualities, including a cast of fun characters who work well off of each other, but a frustratingly straightforward script prevents it from being one of the better WahlBerg collaborations.